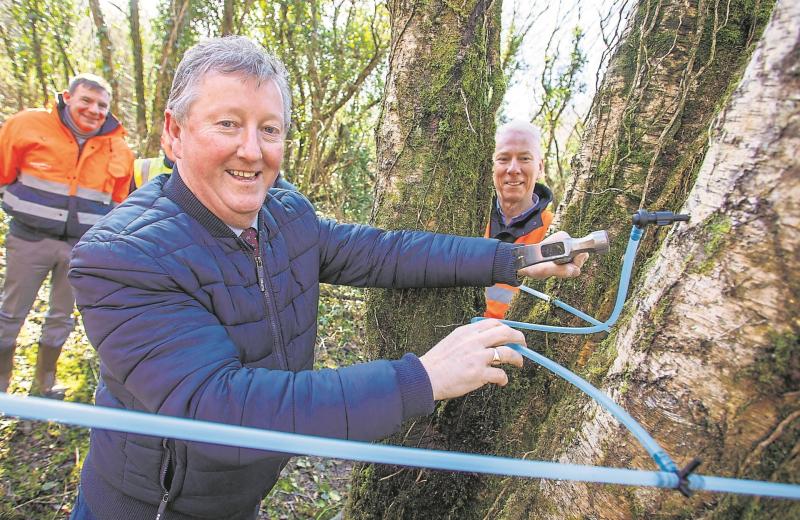 The Minister was on hand to tap Birch trees at Derraghan, Co Longford to mark the beginning of a new season and a new venture for Bord na Móna. Birchwater is a popular drink across Finland and the Baltic States and provides a range of health benefits. Now as part of Bord na Móna’s Brown to Green transformation, the ancient practice is starting to catch on again in Ireland.

For just three weeks as winter gives way to spring, water, minerals and sugars are pushed up from the roots of the birch and the trunks are tapped releasing the valuable liquid. The Birchwater is collected using a method similar to the one used for harvesting maple syrup in North America.

Bord na Móna is investigating birchwater harvesting as part of its strategy to expand its diverse range of low-carbon business operations.

Chief Executive of Bord na Móna Tom Donnellan said: “I am delighted that Minister Canney is here to mark the start of this new type of harvest for Bord na Móna.

“Where we once milled peat we are now harvesting a pure, new, entirely natural and organic health product. The Birchwater Project is still in its development phase but is progressing well with excellent harvest yields from these peatlands. This initiative has been in development since the end of 2018 and employs some people who previously worked in Bord na Móna’s peat harvesting business.

“We are looking forward to the next phase of its growth as it develops outlets for this unique product primarily in the food and drinks industries.” he continued.

Head of new business and communications with BnM, Vincent Redmond, noted that the company could become an anchor tenant in the proposed Lanesboro food hub development. The Birchwater project is part of the accelerated (€1.6billion) development pipeline of renewable energy, resource recovery and new businesses outlined in the company's Brown to Green Strategy.

Key objectives of this strategy includes developing new employment opportunities and using land for a range of new purposes including: