Saints Island impassable after series of storms and flooding 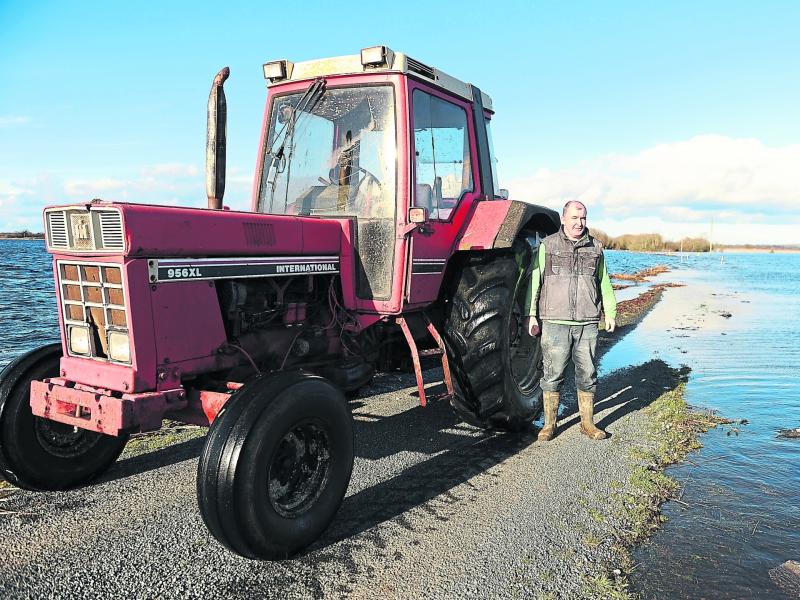 The entire month of February has been storm after storm, wreaking havoc and causing flooding across the midlands. And few know the damage that can do to an area better than Raymond and Francis Killian.

Raymond is one of the few residents of the remote and picturesque Saints Island, near Newtowncashel but, since the flooding began, he’s found it more and more difficult to get to and from his home.

For over a week, the road leading to Saints Island has been completely impassable by car. In fact, the only way Raymond can get from one side to the other is by driving his tractor along the treacherous road which he and his brother Francis have marked out with electric fence posts.

“There’s nine foot of road, and then there’s rubble on either side of it and after that, it’s a six-foot drop into the Shannon,” Francis explained to the Longford Leader.

“Without those posts to mark out the road, it wouldn’t be possible to see where you’re going.

“Most people in that situation wouldn’t be able to manage it, but we grew up on Saint’s Island, so we’ve been doing it for 40 years. But if you made one wrong move on that road and slipped into the Shannon, you’d have a very serious situation.”

The brothers went out in their waders when the floods began and placed electric fence poles at the edge of the road to clearly mark it for anyone trying to cross.

“If you’re driving a tractor through that and you’re trying to watch the road and there’s a wave and there’s a glare off the sun, it’s very dangerous,” Francis explained.

“If you’re not clued in to what you’re doing, you’ll be gone off it in a second. There’s a six or seven foot drop into the Shannon.

“And if a wave comes and hits the front wheel of the tractor, it’ll drag you in. We’re so used to it now, but a lot of people wouldn’t know where the road is.”

His brother, Raymond, was in agreement, adding that the winds from the storms and the waves that they create are a major issue and cause the most danger.

“The water is a good bit higher than what it was last week and there’s a lot of damage to the road,” he said.

“The waves during the storm came up and hit the road and it breaks the tarmac and makes bits of it. It did a lot of damage.

“The water is 18 inches deep in two places. You won’t get a car down that road.”

The last time floods like this were seen in the area was 2016, when Lough Ree hit its highest levels since 1932.

“After 2016, I thought in my lifetime it’ll never be as bad and here we are expected to surpass those levels,” said Francis.

“But I can see no reason why they cannot manage the level of Lough Allen, Lough Derg and Lough Ree more efficiently. These days, they can predict how much rain is going to fall and where. So the lads looking after the levels in Lough Allen know how much will fall. That’ll go through Lanesboro to Lough Ree and to Lough Derg.

“The Shannon is a very slow moving river. They should be able to manage it better.”

While there are no houses flooded locally, there are people in other parts of the country who are suffering a lot more and Francis is convinced that’s down to poor management.

“A lot of these places didn’t flood 40 or 50 years ago because it was managed properly. There’s more money spent on reports and surveys than anything else but a lot of the time, if you just asked people what was wrong, they’d be able to tell you,” he said.

“If the levels of Lough Ree were dropped a metre from September to Christmas, you wouldn’t have the problem we have today. If the level was dropped, Lough Ree would be well able to take it.”

Read also: Lovely weather for ducks... and swans in Longford