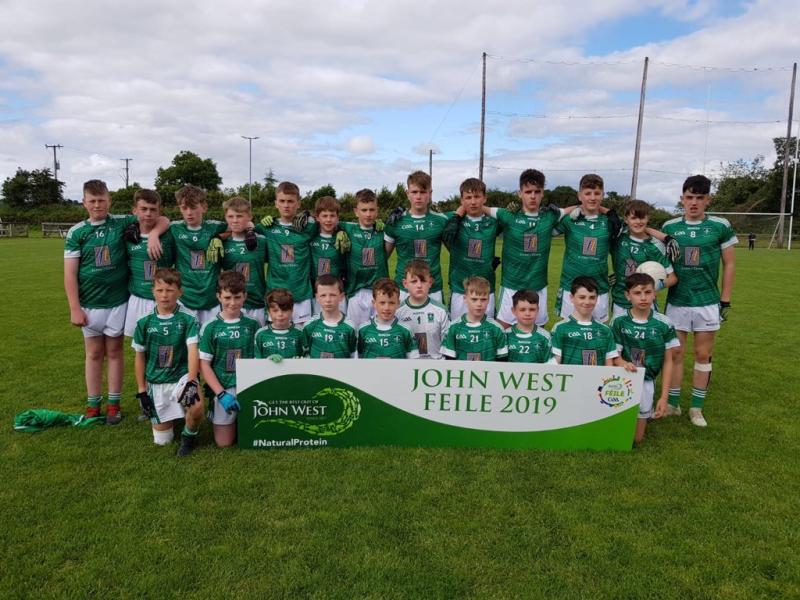 History was made by Clonguish GAA at the John West Féile Peil tournament, which was hosted in June of this year by Connacht GAA, as two of their teams were named All-Ireland champions.

After overcoming Breaffy of Mayo in round one of the competition, the boys U14 team then beat Kildimo/Pallaskenry by a score of 3-09 to 2-01 in round two. They then took on St Mary’s of Sligo in the third round and came out on top thanks to a score of 2-13 to St Mary’s 4-03.

Next up for the boys was a clash against Gaultier of Waterford in the quarter final, which they duly came through by a four point score. In the semi-final, Naomh Éanna of Wexford were the opponents and they were duly seen off with a score of 2-03 to 0-05.
The boys eventually won the Division 4 cup by defeating St Mary’s of Sligo in the final by a scoreline of 1-07 to 0-07.

The girls team began their campaign with a win against St James’ of Galway in round 1 by 5-08 to 2-03. In round three they faced St Fursey’s of Galway, a game they won by 12 points.

In the quarter-finals, Clonguish óg girls were up against Garrycastle of Westmeath. They beat their neighbours by 4-03 to 2-01, to ensure a semi-final clash with Saval of Co Down. They then overcame their opponents by a two goal margin to set up the final with Limerick’s Knockainey.

Although having lost to their opponents in the second round, Clonguish rallied the troops and eventually came out on top by a score of 2-03 to 0-04 to claim the All-Ireland title.

In honour of the monumental achievement of both teams, they were honoured at a civic reception at St Mel’s College on friday, December 6.

The reception was hosted by Longford County Council to recognise the sporting achievements of some of the county’s top performing athletes.

Chairperson of Clonguish GAA Tim Shanley, previously said to Longford Leader of their historic victories, “It was very unique to see both teams coming back to the parish with their All-Ireland trophies.”

Also read: Huge excitement as Gaelscoil Longfoirt prepare for arrival of the man in red