Huge excitement at the success of Longford tidy towns 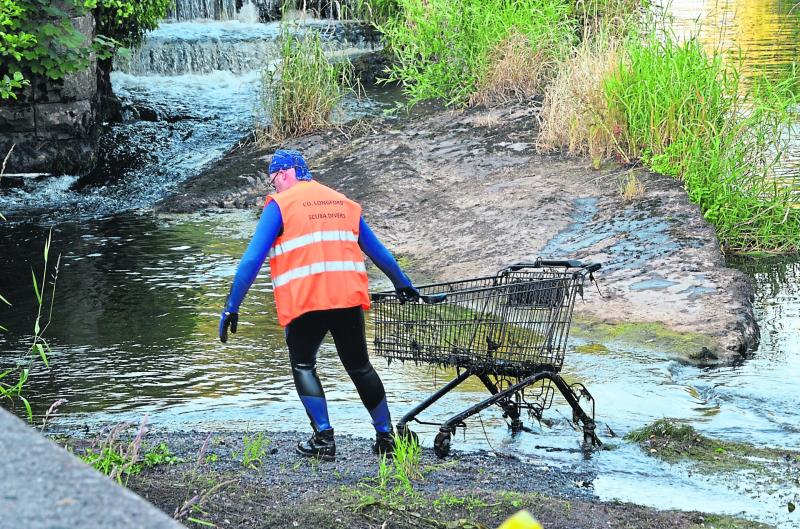 A member of Co. Longford Scuba Divers pulling a trolley out of the river Camlin as part of the Longford Tidy Towns river cleanup

Longford Town can rejoice again this year as the local Tidy Towns Group received great news at the Supervalu National Tidy Towns awards ceremony in the Helix Centre at Dublin City University on Monday September 30, where the winners were announced.

The town increased it’s allocation of marks this year to a total of 320, an increase of five from last year; a fantastic achievement, but well earned. And not alone were marks increased this year but awards were received too.

The Longford team arrived home as the overall winner of the National Gum Litter Task Force award in recognition of their gallant efforts over the last few years, to remove chewing gum from the town’s footpaths and to encourage people to dispose of chewing gum properly.

‘Bin your gum when you’re done’ is the motto, we say. So, as well as more marks, our team took home a nice cheque and a much appreciated medal.

To win any award in this competition is not easy, as competition is keen and there are eight categories under which we are judged: Community Involvement, Streetscape and Public Places, Green Spaces and Landscaping, Nature and Biodiversity, Sustainability (doing more with less) Tidiness and Litter Control, Residential Streets and Housing Areas and Approach Roads and Lanes.

So, work has to start early each year, but this year, by the time the judges arrived, Longford looked amazing for ourselves as well as for our visitors, day trippers and shoppers.

New volunteers are always welcome, any age, any nationality, to join us for even a few hours each week, or your organization might like to join us as a group to work on a particular project.

Awards night this year will be held at the County Council offices in Great Water Street on Wednesday the 23rd of October at 6.30pm. Anybody who helped Longford Tidy Towns in any way, over the last year, is invited to come along and celebrate with us.