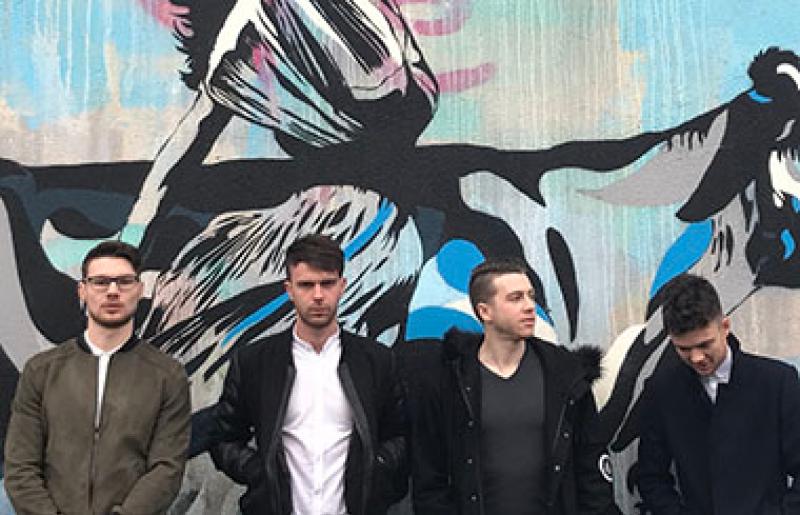 White, Pink + Blue, the debut album of local band, Brave Giant, is now on pre-sale from Dennistons, Longford with a release date of Friday October 4.

The lads have already sold out their album launch night at the Backstage Theatre, but have a number of other gigs coming up around the country, including an event in the Stables, Mullingar, on October 27.

To celebrate the official launch of the album, Brave Giant will make a personal appearance at Tower Records, Dublin, at 1pm on October 5, before heading home to make an appearance at Dennistons at approximately 5pm.

Also read: Christy Dignam to perform in Longford yet again

The album was created in the spring when Emmett Collum, Mark Prunty, Podge Gill and Ross McNerney teamed up with one of the country’s most respected musicians and producers, Gavin Glass or Orphan Recording, to record this debut long play which sees a slight change in direction for the band.

It’s a sound Gavin (producer) affectionately says is “like David Guetta meets The War On Drugs”.

“We can’t wait to share this body of work. The album sees us take a new direction and we believe we’ve developed a great deal musically and lyrically in the last three years,” said lead singer, Podge Gill.

Emmett (percussion) continues, “We’ve explored new sounds and have drawn on influences from even more musical genres. Heavy synths, spacey guitars, driving drums and a mandolin like you’ve never heard before. The core elements which make Brave Giant what it is are still there, we’ve just added some magic, we hope!”

All tracks were written by the band; Peter Ashmore joined Gavin Glass on recording duties at Orphan Recording and Hellfire Studios in the picturesque Dublin mountains. Additional production is by Brave Giant’s own Emmett Collum and the record is mastered by Stephen Ceresia at Stonyfield Mastering.

The album artwork concept was created by Mark Corry and represents the personalities of these four best friends from Drumlish.

White, Pink + Blue will be available on all online platforms and in Dennistons and other music stores nationwide from October 4.

Also read: 'Get Rhythm' as David Kelly brings the Man in Black back and to Ardagh!