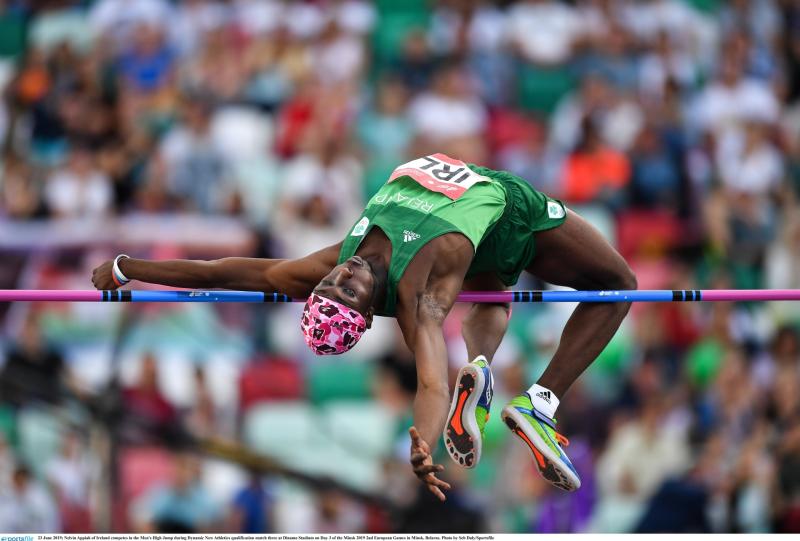 Nelvin Appiah is a Longford athlete aiming for Olympic high jump glory, not an unobtainable target by any means.

Nelvin told the Leader, “I go to school in Moyne.

“My parents are Ghanian, but I have lived in Longford for all of my life.”

Over the past couple of years, Nelvin has developed into one of Longford AND Ireland’s most consistent athletes, even representing team Ireland at the second European Games in Minsk in June, where he finished third in the Men’s High jump class with a best jump of 2.0ms.

“The experience was just mind-blowing. The atmosphere was just incredible.” Nelvin told the Leader.

“I can’t even explain it. When I think back about it, I just get goosebumps.

“It was my first experience in senior competitions. I am young to be with the seniors so it was both scary and good at the same time.

“It made me feel like this was where I belonged.”

Interestingly enough for 17-year-old Nelvin, his start in athletics only came about within the last few years. The interest was peaked early on in life, however, and Nelvin says he has two local men to thank for that, his former principal Colm Harte and Paddy McPhillips of Longford Athletics club.

“I went to primary school in Killoe and Colm Harte, our principal there, got me into sportshall athletics.
“Then after that, Paddy McPhilips came to me and said I would be very capable and said I should try out for athletics in school.

“So, I went and I tried out,” Nelvin continued.

His sporting prowess, for a man miniscule background in athletics, he assumes was inherited from his parents.

He explained, “My mother and father both took part in athletics in Ghana.

“My dad was a sprinter and my mother was a long-jumper. She also played a bit of volleyball as well.

“So, I suppose I got the jumping and sprinting from both of them,” he chuckled

One of Nelvin’s first competitive jumps came not long after joining the local athletics club and fortunately for the successful athlete, his first outing was not a sign of things to come.

“My first competition was in Athlone and I was really bad. “ he laughed.

“I wasn’t really training for it or anything. Other people were training since they were 6 or 7 and I came in and was just useless.

This, Nelvin says, was a baptism of fire with the athlete returning home empty handed, but it also spurred him to improve and from here, the real hard work began. This marked the time that the Longford man began to take the sport a lot more seriously.

He said, “I used to play Gaelic and rugby as well, but I prefer an individual sport…You have only your own self to beat.
“I am always trying to better my own self,”

Nelvin worked hard since that period and his most recent success has come in the form of an appearance at the National Junior and U23 Outdoor championships in Tullamore. Having garnered the crowd’s support, Nelvin successfully achieved a 2.00m jump in the Junior Men’s High Jump, bringing home the gold medal in the process.

Last weekend, Nelvin also had further success in Tullamore at the National Outdoor championships, as he won gold in the high jump on day three. In terms of the future, Nelvin, who now trains in Sligo IT with Dermot McDermott as his new trainer, only has eyes on self improvement.

“I am aiming to just better myself again, jump higher and keep on being consistent and see where I go from there.” He said.
When asked if his main aim is Olympic competition, Nelvin replied, “Olympic level, definitely.”

On the shorter term, however, Nelvin has a target in mind.

“During training sessions I try them out and just skim it, So with a good atmosphere and everything, I should definitely be able to do it.” said Nelvin confidently.

Nelvin's next international competition is the European senior team championships, which take place in Norway in August.

Before that, however, wished to thank his huge support network for all of their help thus far, including his family, friends and numerous coaches such as Colm Harte, Paddy McPhillips, Donal Mulligan, Leslie Simmons and more.

Concluding, Nelvin encouraged the people of Longford to help other athletes in the area, such as himself, to move forward with their careers and support the ongoing Longford Athletics fundraiser quest for a new training centre

“It is hard being an athlete in Longford, when it is all about gaelic.

“We need all the help we can to get our new facility.” Nevlin concluded.