Are you ready for the 68th annual Granard agricultural show? 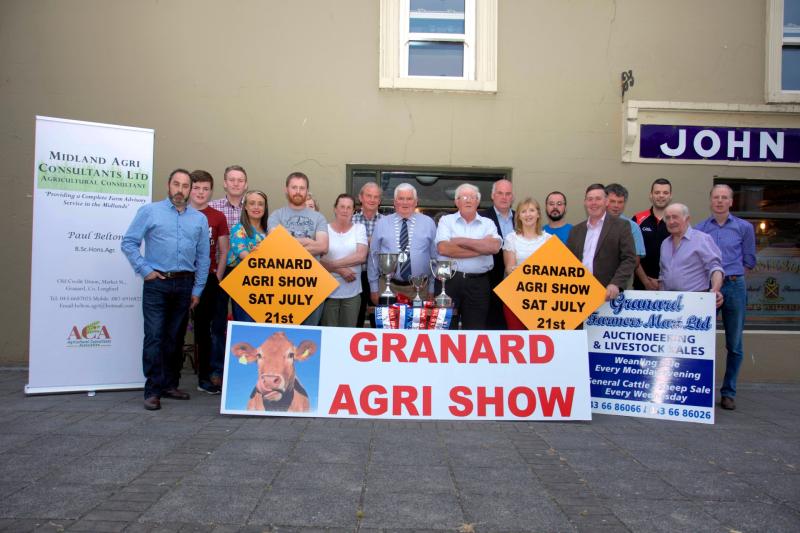 The show committee at the recent launch night in Granard. PICTURE: Shelley Corcoran

Hazel McVeigh, Secretary of the show committee, told the Leader, “We had a great turn out at our launch night.

“We had a lot of sponsors there on the night, committee members, the local gardaí, members of the ICA ladies and general members of the community who give up their time to help during the show.

“We were delighted to have them all there,” she said.

Hazel said without the constant support from the local community and sponsors, the would not never have survived 68 years.

“Realistically, small shows find it quite hard,” she explained.

“Without our sponsors, the show would not be able to proceed.”

Organisers have promised that this year’s show will be bigger and better than before, with it remaining a two-day event and commencing on Saturday, July 20, before concluding on Sunday, July 21. Taking place at the Higginstown complex in Granard, there is something for everyone at this year’s event.

“Last year was the first year we ran a two-day show.” she told the Leader.

“This day it is two days again, with showjumping on day two.

On a competitive front, the 68th instalment has a first for the show, with the introduction of the Non-pedigree cow and calf competition. This class is sponsored by AXA insurance and boasts a €2,000 prize fund. Entry is set at €30.

Hazel said, “We were lucky enough this year to get AXA insurance onboard to sponsor the highlight of this year’s show, which is the cow & calf championship.

“That is taking place on showday at 3pm. AXA have kindly sponsored the class and the prize fund, which is €2,000.”

“The first prize winner goes away with €800. Entries are already coming in fast for it and we are hoping to get entrants from a wide variety of counties,” she added.

Another first for the show, is the introduction of the working hunter and side saddle horse classes. As well as this, equine enthusiasts can try to get their hands on the €1,400 prize fund on offer as part of the Horse jumping show ‘6 Bar competition - winner takes all’. Top placing rider gets a cash sum and the Perpetual trophy.

Hazel says, “The 6-bar competition being the highlight of day two, with a prize fund of €1,400 in total. The winner of the 6-Bar gets €500.
“We decided two or three months ago that we had to revamp some of our classes, as they were a little outdated. We needed to add some new aspects to the show, to cater for different equestrian types,” she explained.

These afforementioned new aspects will be housed on the field of Patrick Durkin, who kindly offered the space to the committee.

“Our space at the showgrounds is very limited, So we were lucky enough Patrick Durkin offered us his field to use, which is adjacent to the showgrounds,” Hazel said.

“That will accommodate the new aspects of the show this year, one of them being the working hunter classes.”

For those with the competitive edge but without the livestock, there are also many other competitions in which you can test your talents. This includes the photography competition, which has four classes (Best sports, Best Seascape/Landscape, Photo with the best caption and Best Farm scene) and an entry fee of €2. All entries must be submitted by July 10 to granardshow@gmail.com.

For the younger attendees, there is a primary schools competition taking place with entry set at €0.30 per class. There are twelve classes in total, divided into three age groups; 4-6 years old, 7-9 years old and 10-13 years old.

Hazel states, “There are a lot of schools within the catchment area of Granard, so every year we host a school competition in conjunction with these schools.

“The teachers and students have been absolutely brilliant, they all jump on board and there has always been a high volume of entries. It has been brilliant to see.”

With plenty of fun, games, food, drink, machinery, animals, craic and dancing, the 68th annual Granard show is one most definitely not to be missed.

The committee secretary in conclusion said, “One of the big things with the Granard show, is that it is a community based event.

“You don’t have to be into the whole country living, it is a chance for young and old to come and enjoy a family day out.

“There is something for young and old and it is just a brilliant day out. If the sun shines on the town, it will be the place to be on the 20th.”