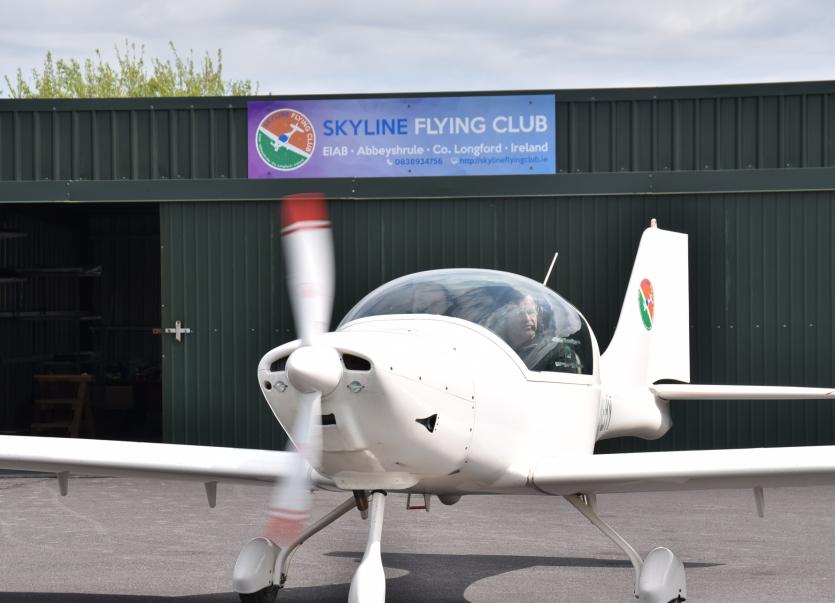 The Skyline flying club, based at the Abbeyshrule Aerodrome on the banks of the Royal Canal and River Inny, was founded in the early part of last year.

Their mission is to provide people with an opportunity to fly in a safe, fun and affordable facility, something most definitely achieved.

“We wanted to set up a club up almost like a community resource, to make aviation fun and accessible, whilst doing it for the lowest cost and highest standards of safety,” Chairman Colm Murphy told the Roving Leader.

The group have made significant strides in a short space of time and now have state of the art facilities in Abbeyshrule, with an airplane of their own (an Urban Air Samba XXL), a hangar and clubhouse now on their site.

“A number of people got together and we decided we were going to do this. So, we raised some finances between us all and purchased the airplane, the hangar and the clubhouse,” Colm said.

Colm said: “We are very fortunate to have four very experienced instructors that give a huge amount of their own time. They have a great wealth of experience there to draw on.”

Colm explained that the group was one first set up to allow members with an interest in aviation and flying, to do so whilst getting to see different parts of the country in the process. There are now 35 active members on the group’s roster and they conduct fly-aways to areas such as Donegal, the Aran Islands, and Sligo. Some have even flown internationally.

Colm explained: “It is a bit of an unusual hobby, but it can be great fun and an achievement for somebody, whether they go on to do their first solo flight or get their full licence.

“All the instructors say, your licence is really a licence to learn.”

For the group, the focus is not solely on flying, but having as much fun as possible. They undertake many flyaways and social events throughout the year, some of which have no connection to aviation whatsoever. This includes canoeing, card games, diving and more. They also host their own Christmas dinner and Summer barbeque in Abbeyshrule.

Colm said: “It is more of a social group than it is anything else. Last year, we went to Donegal, Sligo, Shannon, Ballyboy, all over the country

“We have as many social events as we can throughout the year,” he added.

Colm says the group not only benefits its members, but also the area of Abbeyshrule, with people now flocking in their droves to see one of Ireland’s top, small-scale airfields.

“There are people coming to see Abbeyshrule and down to the airfield, which is a fantastic resource. People are even coming from abroad as Longford has a fabulous facility here and it is right in the heart of the midlands.

“There is also a fantastic runway there, which is in very good condition.”

Anybody looking to join this unique club which is in its infancy can do so by contacting Colm by phone on 083 893 4756 or through the club's official website www.skylineflyingclub.ie.

“It is just some grown ups having a bit of fun, doing something a little bit different” he said.

It is exciting times ahead for the group as they have big plans for the coming months. One such plan is a trip to the Bray air show.

For fun, craic and a chance to see Ireland from a different angle while making friends, contact the team now. You would be ‘plane’ mad not to.