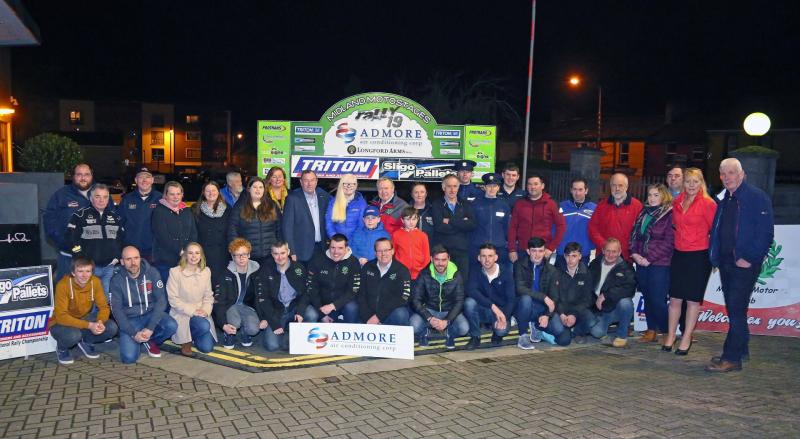 The rally takes place on Sunday, March 24 with the headquarters situated in the Longford Arms Hotel. The launch night started off with a photo shoot under the start ramp with rally officials and competitors. Following this, it was back to the ballroom of the hotel where event press officer Barry Molloy welcomed everyone to the launch and gave a brief outline of the history of the club and the events the club runs throughout the year, including its flagship event, the multistage rally.

Barry thanked Longford County Council, the Gardaí, local press and radio and in particular all the residents along the route for their co-operation in running such a large-scale event. Chairperson of Midland Motor Club, Cyril Rollins, spoke of his delight to have the rally back in the region after it last ran the event in 2017.

The event is a round of the Triton Showers National Championship, the Sligo Pallets Border championship, the Hugo Loonams Midlands East Championship and the A Plus Skip Hire Club Championship. Cyril spoke of the need to keep safety to the forefront of everyone’s mind and he urged spectators to obey marshals and refrain from standing in danger areas.

The Clerk of the Course, Jeremy O’Connor, gave details about the event including the location of the stages in Killashee, Newtowncashel and Kenagh areas with centralised servicing in Mastertech Business Park on the Athlone Road. Jeremy thanked all the sponsors of the event including main sponsors, Admore Air Conditioning Corporation and the Longford Arms Hotel. He said the club was fortunate to have such sponsorship as without this support, the rally would not take place. He thanked all the stage sponsors, service area sponsors as well as marshal’s sponsors.

Jeremy outlined a new Motorsport Ireland safety tracking initiative for rally cars which should enhance competitor safety. It involves tracking the cars throughout the rally and will identify where each competing car is located at any time. Garda Eamonn Flanagan spoke briefly about road safety and he said that there will be a “highly visible” garda presence on the roads around the Longford area during the rally. He encouraged everyone to stay safe on the roads over the weekend and wished everyone involved an enjoyable weekend in Longford.

Orlagh Reynolds, of the Longford Arms Hotel, spoke about her delight to have the rally back in the Longford area adding that it was great to see all the sponsorship and support for the rally.