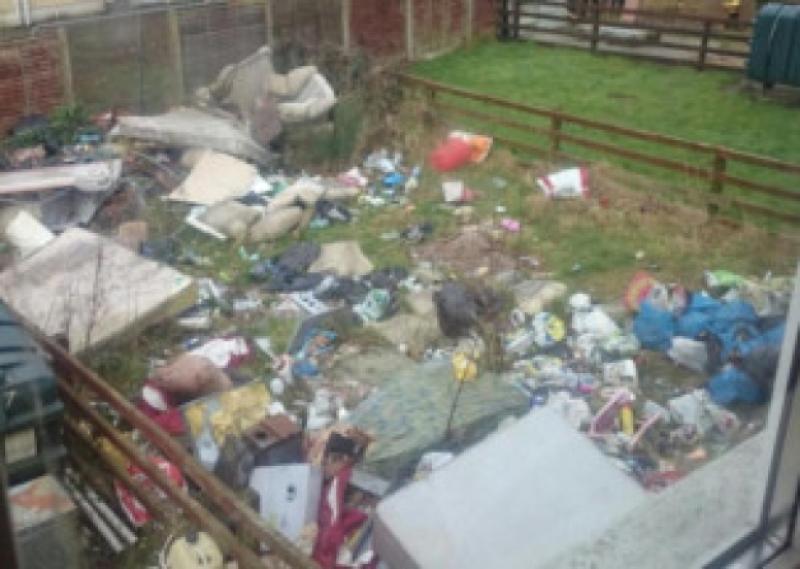 The issue was raised by Cllr John Browne (FG), who circulated photographs taken in the Cluain Ard and Palace Crescent areas of the estate, which showed a build-up of refuse at a number of properties.

“There are burnt-out houses and rubbish,” he said. “The place needs to be tidied.”

The Cathaoirleach of the Municipal District, Cllr Mae Sexton, branded the situation as “absolutely outrageous”.

“The problem is with the privately-owned houses,” she asserted.

Cllr Gerry Warnock (Ind) said it was time to “take the gloves off and play hardball” with the property owners.

“This is disgusting and it will attract vermin,” he noted. “These heaps of rubbish didn’t appear overnight; it’s happened over time. We’ve given people enough time to clean up. It’s time to go for the jugular.”

Cllr Browne continued by saying, “We could repossess these houses as derelict properties. As Gerry said, we should take the gloves off.”

He also pointed out that the Council’s roadsweeper had not visited the area: “I saw it in College Park at lunch time, but I don’t see it in Ardnacassa Avenue. There was a fire there on one of the greens last November and the remains are still there.”

The councillors’ desire for direct action was tempered by Longford County Council Director of Services, Frank Sheridan, who reminded them that they did not possess the powers to deal with the issue at municipal district level.

“We need to be realistic about what we do,” he explained. “Your function has changed (since Longford Town Council was abolished). You have no statutory powers at municipal district level. Can I suggest you get together with the County Council and work on it there?”

Asking the Council’s Housing Department to prepare a report, Cllr Sexton said, “It’s up to us to put a joint notice of motion to the County Council for this to be prioritised.”