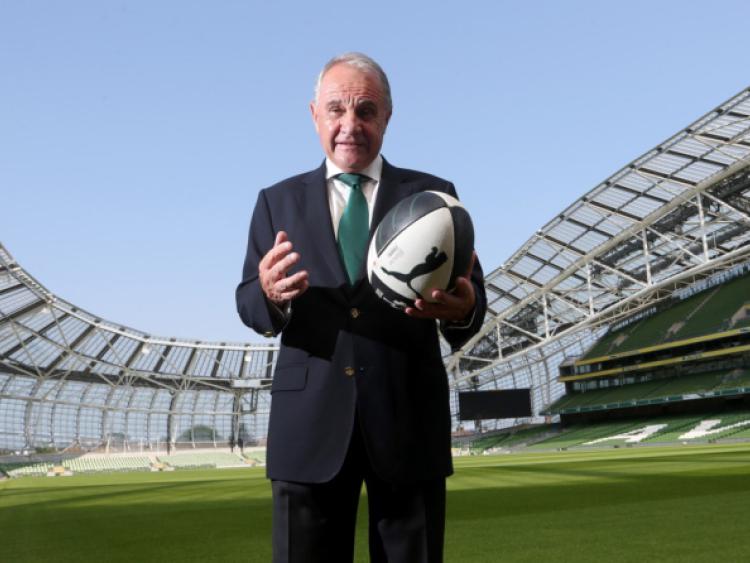 “I’ll give it my best shot and I certainly hope to represent Longford at the highest level to my best of my ability.”

“I’ll give it my best shot and I certainly hope to represent Longford at the highest level to my best of my ability.”

He added, “It is a big challenge and a big honour for Longford rugby club. I’m the first person from a junior club to ever be elected as President. From a club perspective that is huge. And I’m delighted it is Longford that has the honour of this little piece of history.”

Pat, who is also Chairperson of the IRFU’s commercial and marketing committee, has overseen some of the biggest sponsorship deals in the Union’s history - including O2, Puma, Volkswagen, Eden Park and Guinness – now worth €12m per annum.

All the while, throughout his successful career, he has remained loyal and proud of his Longford roots.

“Back in 1971/’72 I moved to Longford, and I was there for about 15 years or more. When I moved back to Dublin I didn’t move to another club, I kept Longford as my club. I’m also a trustee of the club. I found that living in Longford was a fantastic experience. It gave me a sense of loyalty to the club and the place.”

President of Longford RFC from 1983 to 85, Pat played across the backline during his playing days and during his early years with Longford, the first clubhouse was built, led by a small committee of the late David Pearse, Warren Turner, Paddy Quinn and him-self.

“We were using the Annaly Hotel as our HQ and for changing rooms and we set about building a new clubhouse and ultimately succeeded. I think it was opened in 1979. At the time it cost about £65,000. I think we had about £500 in the bank. We didn’t know how we were going to fund it and some thought we were foolhardy but we managed it against the odds.”

Pat attended the Towns Cup Final earlier this year where Longford went down to Tullamore. “During my playing days the nearest we got was a semi-final. I played with Longford 1sts, 2nds and 3rds and I was on the first Longford 2nd teams to win the Midland League. The team was captained by Commandant Noel Byrne and included Derick Turner.”

IN A GOOD PLACE

Pat believes Irish rugby is in a good place.

“Taking up the Presidency at this time, I’m lucky because I think Irish rugby is in quite a good place at the moment. The selection of eleven players on the Lions tour, the successful tour to America and Canada where the Irish team won both matches. The consistent success of the provinces in Europe and I think they’ll continue to be. And there are also very encouraging indications from our underage teams and the emerging players. And then of course you’ve the Grand Slam success of the women’s rugby team and women’s rugby is getting stronger and stronger.”

And his hopes for 2013/’14. “I’d be disappointed if we don’t win a Triple Crown. I would hope that we’d go a step further and win the championship. There is a big challenge coming up in November when we have Australia, New Zealand and Samoa in town but I imagine that we’ll be targeting the first ever win over the All Blacks and that is a very interesting scenario coming up.”

He said Brian O’Driscoll was a credit to Ireland in how he coped with his omission from the Lions side for the third and final test by coach Warren Gatland.

“Like every other Irish man I was disappointed and surprised but I think if you want to take a positive from it, the manner in which Brian conducted himself, the dignity and graciousness of the man at a time when he’d a bitter pill to swallow, really caught the imagination of the international world. He was obviously very disappointed but he handled it in a true professional manner. He was a credit to Ireland.”

A Mr Boots award winner in 2012, Pat said this ‘massive honour that came out of the blue’. “One of the nice things about it is that they actually held the ceremony in Longford RFC which was a big bonus.”

He believes his elevation to President will encourage more people from junior clubs to eye up the job in the years ahead.

“I actually believe it will give other people the encouragement to go ahead and do it. There probably was a perception out there that the Presidency of the Union was really in the gift of senior clubs but that isn’t the case. No one ever put their hand up before and now that it has happened it will certainly give other people in junior rugby encouragement and confidence to go forward.”

New IRFU President Pat Fitzgerald says rugby is thriving in community clubs like Longford and he stressed that community involvement is the way forward.

Pat told the ‘Leader’, “Clubs like Longford, Mullingar and Tullamore have got the support of the local community who’ve bought into the clubs and support them and that in my opinion is the way forward for rugby.”

He suggested some bigger clubs were struggling. “How many young rugby players can live in D4 for instance? If you look at Navan and Boyne, they have increased enormously in the last five years and the way I see it I’d be promoting the community element of rugby. We may have been a bit lax in the past and people had some reservations about joining a rugby club. It is not elitist anymore. It is a club and sport for everybody.”

He added, “As long as we realise that the professional team is always going to be the shop window and financial engine that drives everything. But the club game and grassroots will always be the bedrock on which Irish rugby is built. Clubs who make an effort to go out into the community and attract local people will be successful and that is the way forward.”

This Saturday, at the Sin Bin Event Centre, Longford, a celebration dinner is being staged to honour Pat Fitzgerald following his inauguration as IRFU President.

A former player, President and current trustee of Longford RFC, Pat is the first President from a junior club.

He revealed, “I’m really chuffed the dinner is happening and can’t believe it is a sell-out. I’m looking forward to meeting guys I haven’t seen for a long time. It is great the IRFU and Leinster Branch are taking tables, and there’ll be some famous names and ex-internationals as well.”

“I actually won a minor football medal with Ferbane in 1963. There some well-known lads on that team - Tony McTague, Michael Grogan and Michael Ryan.” McTague later captained Offaly to All-Ireland SFC glory in 1972.

The sporting connection doesn’t end there. His sister Alice is married to Shane Lowry’s uncle and lives in Ferbane as does his brother Frank. His brother Tony and sister Brigid reside in Dublin.