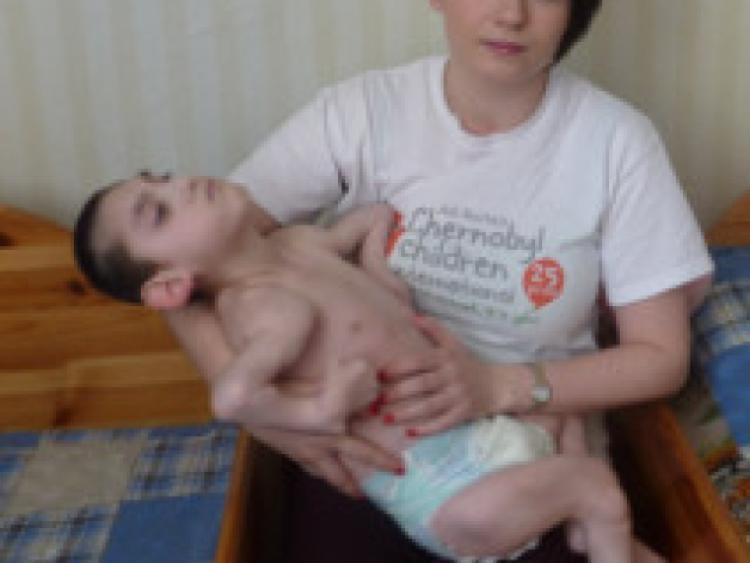 Emily Hughes, who represented Longford at the Rose of Tralee Festival last August, recently joined a group of her fellow Roses on a trip to Belarus, where they volunteered at a mental asylum for children in the Chernobyl region.

Emily Hughes, who represented Longford at the Rose of Tralee Festival last August, recently joined a group of her fellow Roses on a trip to Belarus, where they volunteered at a mental asylum for children in the Chernobyl region.

“We spent five days volunteering at the Vesnova Children’s Mental Asylum,” Emily explained. “We flew out on the 24th of March with Adi Roche and a medical team from the Chernobyl Children’s International charity and we arrived in Vesnova after two flights and a three-hour bus journey.”

Speaking of the tasks she undertook during her stay, she said: “We spent a lot of my time playing with the children, feeding them, and changing them because many of them aren’t toilet trained. We also entertained them by playing music and they did the same for us.”

Emily, who works as a doctor at the Mater Hospital in Dublin, also had to draw upon her professional training during the visit. “The doctor at the asylum had recently quit, so myself and another girl with medical training helped out. The staff there fear sending the children to the nearest hospital, because they say ‘they don’t like to see the children from Vesnova there’,” she revealed. “It’s such a stark contrast to Ireland, in that we might consider kids like these to be precious, but in Belarus they are forgotten and shunned by society.”

For the older children residing at the institution, there is a constant fear of being transferred to an adult asylum, which Emily says, “is described as a soul-destroying semi-prison. Basically, when a resident there dies, a bus is sent out without warning to collect one of the children who has reached 18 years of age.”

The level of support Emily received at home prior to making the trip surpassed her expectations: “We were given a target of €1,000 to raise by the charity, but in the end I managed to raise €5,500. That was done through a back-packing day at Dunnes, collections at the school and church out in Killoe, and a fundraiser in Begley’s Pub. I also received a lot of personal donations and help from local businesses. People really couldn’t do enough, and I’d like to thank them all for their generosity.”

Even though she’s back home and has returned to her normal routine, the experience has left a permanent mark on Emily: “I’ve spent time thinking about Vesnova since I’ve come home. Whenever I find myself getting worried over something small, I remember Vesnova and the children there, and remind myself that I’m grateful that all that I have here. I have the option of going back next February, and providing work doesn’t get in the way, that’s what I plan to do. I’d love to return there and help out some more.”