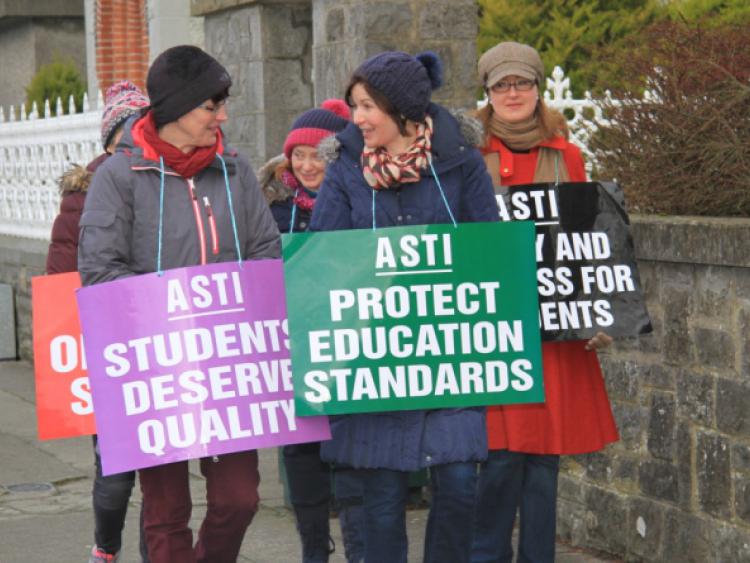 Teachers across Longford took part in the national

Teachers across Longford took part in the national

The one day work stoppage saw schools shut around the country for the second time since December while their teachers took to the picket line.

Speaking to the Leader at the picket line at Mercy Secondary School in Ballymahon on Wednesday, union members were adamant that assessing their own students would have negative knock on effect.

“External assessment is the best route to take on this,” teachers said.

“We are trying to get the best our of our students; build them up; instill confidence and skills in them; we will only be bringing them back down if we are forced to mark them.”

Members of ASTI and the TUI at Mean Scoil Mhuire in Longford town also spoke to the Leader on the day and said the issue was about the ‘independent assessment’ of their students.

“We are trying to put children first,” one teacher added. “It is important to have children assessed independently.”

She went on to say that the Irish education system was held in high esteem all over the world and any attempts now by the Department to insist that teachers grade their own students, would simply serve to “undermine” the whole system.

“While we appreciate that there are problems within the system, it is the good of the students that we have at heart,” she continued.

“We have been very willing to enter into the reform process and assessment is the only issue now that needs to be reconsidered.

“We are in the classroom acting as advocates for our students and then the Department comes along and asks us to mark those students.

“As a teacher you are asked to facilitate the learning of children and marking their work is not part of that.”

Teachers went on to say that while they acknowledged there were problems within the system, and more assessment was necessary, they held the good of their students “at heart”.

“We are very willing to enter into reform and assessment is the only outstanding issue that needs to be clarified; we want the marks to stand up to international scrutiny at the end of the day, so this is a big worry for us. If we don’t stand up now there will be a serious knock on effect to this,” they added.”

Unions have made in very clear that they are unhappy at plans to make teachers assess 40 per cent of the work of their own students.

Talks between the ASTI, TUI and the Education Minister last week failed to produce an agreement on the issue.

Meanwhile, Minister of Education & Skills, Jan Ms O’Sullivan said the proposal that was on offer for Junior Cycle assessment - whereby 60% would be marked by the State Examinations Commission and 40% would be assessment in schools with the involvement of teachers - was the best of both worlds.

She said all of the knowledge of the issue, including research from other countries and from people who feel strongly about it in Ireland, was that, the proposal would be a very positive learning experience.

On Thursday, ASTI’s General Secretary Liam King confirmed that unions would sit down with the Department of Education this week to discuss a way forward,