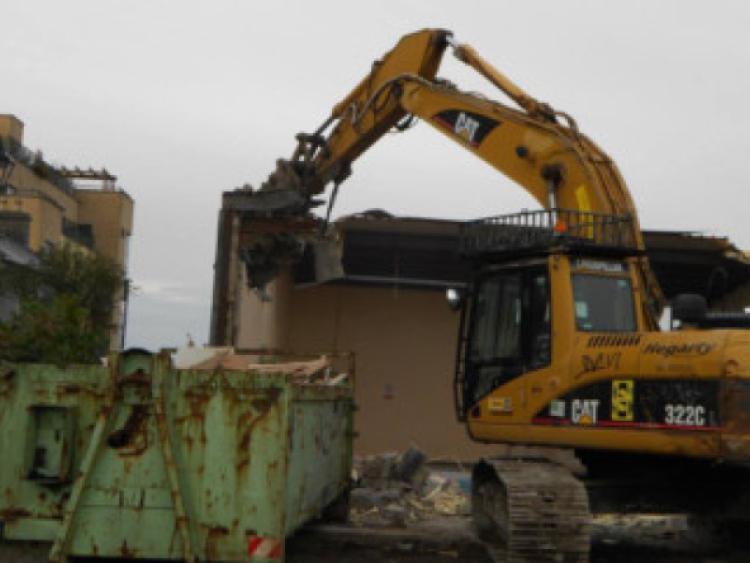 The demolition of the old swimming pool at the Market Square in Longford last week heralded the end of an era for the town.

The demolition of the old swimming pool at the Market Square in Longford last week heralded the end of an era for the town.

First opened in 1966 on the site of the Royal Canal harbour, the yellow pre-fab building became a familiar landmark to generations of Longfordians, many of whom learned to swim there.

“It was the first swimming pool of its kind in the Midlands,” recalled local historian Noel McGeeney. “People would come from from far and wide to use it.”

Detailing how the pool came to be constructed in the town, MrGeeney revealed that it was not a straightforward process. “Dessie Hynes, Albert Reynolds, and Mattie Lyons Jr had started out in politics and they, along with Larry Donegan, who was an engineer with the County Council, had the idea for the pool,” he explained. “Neil Blaney was Minister for Local Government at the time and they put the proposal to him and persuaded him that Longford was an ideal location for a pool.”

However, there was a mixed response from local representatives at the time and when the time came for Longford County Council to vote on the matter, it was a close call.

“A lot of the rural councillors saw it as only being of benefit to the town and not the rest of the county, so it came down to the casting vote of the Chairman, Gerald Farrell,” continued Mr McGeeney. “But after it was built, the Co Council took it over and looked after it well.”

Costing £16,000, the swimming pool was built to an off-the-shelf design, and the work was carried out by a building company from Dublin.

“There was a man from Holland by the name of Albert Lykes who was selling these pools as packages,” Mr McGeeney revealed. “It was built by builders from Dublin called Kevlahins, with the father and his four sons doing the job. They did a great job on it. When it was finished, Minister Blaney came down to officially open the pool and there was a big do in the Annaly Hotel to celebrate.”

On a personal level, Mr McGeeney has had a long association with the pool.

“I have great memories of the pool,” he admitted. “I used to be in there quite a lot and my family learned to swim there. It was great for the town because there was a great cameraderie amongst all the young swimmers. The Annaly Swimming Club, which had been based out in Clondra, moved to the pool, and it had the edge on a lot of other clubs because it had the use of a heated swimming pool.

“For a good few years I helped out on a voluntary basis doing maintenance at the pool and looking after the boiler.It was a well-kept pool with great people working there, and it says a lot about the quality of the staff there that not a single life was lost in Longford swimming pool.

After 41 years of use, the pool at the Market Square closed when a new €7 million facility was built at the Mall complex, and had been lying idle ever since. The building’s removal has raised hopes of the the old Royal Canal harbour being excavated and reconnected to the waterway, but for now the site will become a green area.

“It’s sad to see it go, but time moves on,” Mr McGeeney reflected. “The other day, after it was knocked, I looked out across the square from my window and I saw the train from Sligo heading into the station. I couldn’t believe it! It was the first time in 47 years that I was able to see a train from the Market Square.”