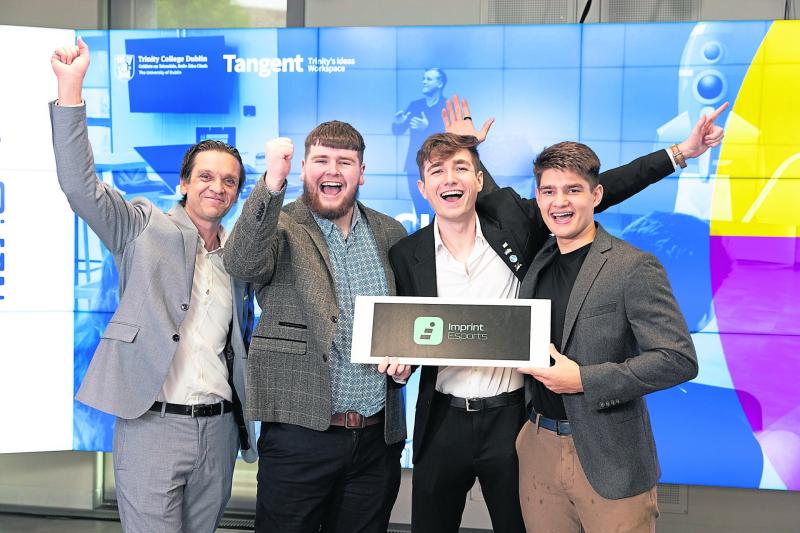 The genre come a long way since then, an example being the 2019 Fortnite World Cup Finals which boasted a prize pool of $30.4million.

That saw Kyle “Bugha” Giersdorf earned $3 million in the solo finals, while David “aqua” W and Emil “Nyhrox” Bergquist Pedersen shared $3 million when they won the duo finals. They are not even the biggest payouts.

Although the pay packets are slimmer than professional football or golf, the money involved is not insignificant.

Three young men who recognise this are Peadar Kenny from Longford Town, Adam Farrell from Ballyleague, Roscommon and Liam Junkermann from Connecticut in the US. All three attend Trinity Business School, Dublin where Adam studies Business Studies and French, Peadar's focus is on Computer Science and Business and Liam is studying Computer Science.

The trio's Esports interest is not as gamers, but as statistical analysts. They have come up with 'Imprint Esports', a company helping esports teams analyse players performance.

“Esports function in much the same way as traditional sports,” Peadar told the Leader, “these teams play there players hundreds of thousands of dollars. They play in massive tournaments, they are watched all over the world.

This is where Imprint Sports comes in: “We have built a system where we take data from all players, put it on to our site and allow people make a comparative analysis of the players. This is a tool that aids in the training and recruitment of team members.”

The notion of children “wasting their time playing video games” may be a thing of the past, but the status of elite esports athlete is the preserve of the few. Making the grade as a top flight video gamer is down to “perfect practice”. That is driven by data.

“You would be surprised at the depth of the data available,” Peadar says, “We can analyse replays and look at how quickly a player reacts in a certain situation. You can tell how many different buttons they press in a minute. It is all there. We collect the data, our system puts that together and it will be used to draw conclusions on the performance trends of the player.”

The LaunchBox success is just a starting point for the enterprise: “The end goal is to be for all esports. We are a three man team, soon to be four. At present we are focused on Dota [Defense of the Ancients: a community-created mod for Blizzard Entertainment's Warcraft III: Reign of Chaos]. That is the genre we are centred on for now.”

Success in the LaunchBox programme is a big deal. LaunchBox has been a starting point for many successful Irish businesses. These include Touchtech Payments, which was acquired Stripe in 2019, and Equine MediRecord, which recently raised more than €10m to expand globally.

LaunchBox is coordinated by Tangent, Trinity’s Ideas Workspace. Gavan Drohan, head of entrepreneurship at Tangent, said that TCD is known “as a community of innovators” and this reputation is “undoubtedly sustained thanks in no small part to LaunchBox”.