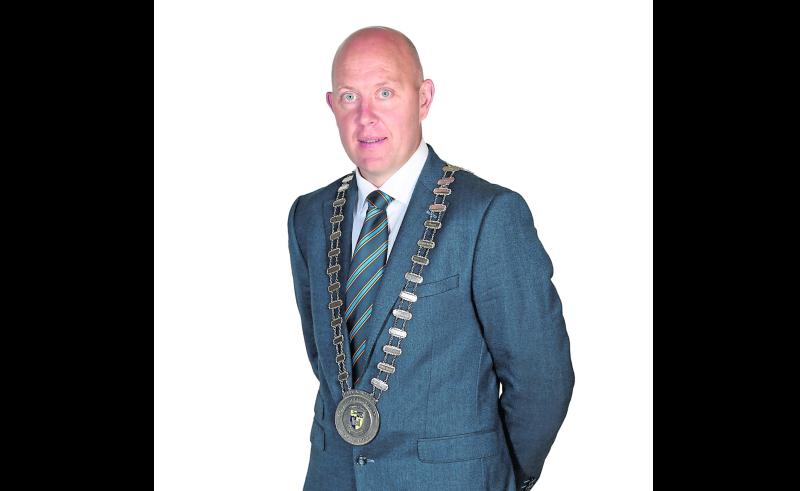 Fine Gael's Paul Ross is to serve as Cathaoirleach of Ballymahon Municipal District Area for the coming term. Cll Ross takes the helm of the six person authority following his uncontested election.

The MD held its AGM at the local authority HQ at Water Street on Wednesday afternoon (June 29). Fianna Fáil's County Councillor Mick Cahil handed over the chain of officer to the newly elected Cathaoirleach.
Cllr Ross, who served as Leas Cathaoirleach of the MD for the last 12 months, started by thanking the outgoing MD head: “I would like to thank Cllr Cahill for all his work for the last year.
“This was his second time in the role. He was the first person to serve in the position. He is a very steady pair of hands. He was great man to work with.”
This will also be the second time the new Cathaoirleach hold the top spot of the Ballymahon MB: “It's a huge honour to become a MD chairperson. Wearing the chain brings a great deal or responsibility, but I'm delighted to be back here again.”

Cllr Ross said the “very busy MD” is “the most exciting area in the county” adding: “There is a lot to do in the coming 12 months. We have secured money for Ballymahon, Edgeworthstown and Lanesboro and will be progressing with a number of projects. On the housing front I would like to see a number of affordable housing development in out area commence.”

Cllr Ross was proposed by fellow party member Colm Murray, with the outgoing Cathaoirleach seconding the motion. Outgoing chairperson, Mick Cahil, thanked the executive for their support in the last year, commenting: “A lot of good work has been done over the last year.”

“We have focused our monies on areas that especially need it. Particularly special projects that will make a difference to the MD area. I'm sure we will continue in the same vein in the coming year.”

Cllr Cahil pointed to the promised investment by Center Parcs as one of many positive developments in the area during his time as Cathaoirleach.

At that same meeting Cllr Gerard Farrell was elected to the post of Leas Cathaoirleach of the Ballymahon MD. Cllr Farrell was proposed by Cllr Colm Murray.

Fellow councillors Mark Casey and Pat O’Toole, who logged into the meeting virtually, congratulated Cllr Ross on his appointment and commended Cllr Cahil on his time in the chair.