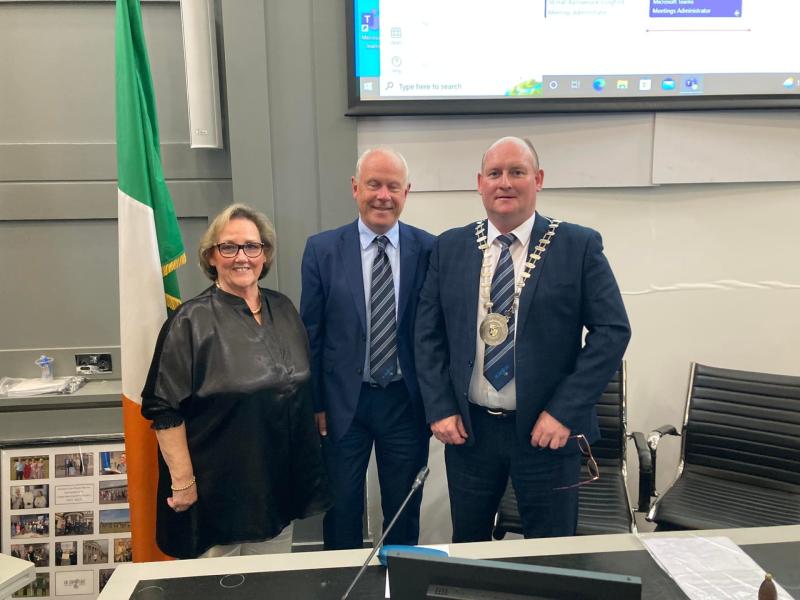 Cllr Nolan was speaking after handing over the local authority’s chain of office at its annual general meeting to Cllr Turlough McGovern yesterday.

The Fine Gael local politician said her third spell at the helm, over a decade on from her last stint as county cathaoirleach had taught her plenty in terms of where Longford stands in the minds of its international counterparts.

“We are not doing our county justice until we let the rest of the country know what we have,” she said.

“It is something we should be proud of and to let everyone in the country know that Longford is open for business.”

Cllr Nolan, who is repeating her calls this week for a skate park to be brought to the county, said there was a pressing need for local politicians and senior local authority officials to ensure the county’s economic rejuvenation remains firmly on track.

“It’s time that we rebranded Longford. Whatever we think of Longford you should have seen like I did, how visiting dignitaries saw our county through different eyes,” she said.

Tributes to the experienced local politician were as plentiful as they were distinct with her Leas Cathaoirleach colleague Cllr Paraic Brady describing her as the “mother of Longford”.

In a light hearted note, Cllr Brady hailed his fellow party member’s work ethic, revealing how he had been left physically exhausted when filling in as stand in cathaoirleach for a week.

“I wouldn’t have liked to have been following you around the county Peggy because there was one week there you said you will have to fill in for me and I am not joking you I had to buy a new pair of shoes,” he told yesterday’s meeting.

“You had a wonderful, wonderful year and for someone who has their heart and soul in Longford, well after this year you will always be known to me as the mother of Longford because your heart, your soul and your passion is for this county.”

Those remarks were ones which were echoed by Cllr Nolan’s successor, Cllr Turlough McGovern.

The Independent representative admitted his task in living up to and emulating Cllr Nolan would be no easy task, saying she was and continued to be an “outstanding contributor” to local politics in Longford.

And like Cllr Brady before him, Cllr McGovern added a touch of light hearted humour to proceedings by alluding to how those closest to her would be breathing a sigh of relief she was back among the county council benches.

“There will be one man (husband, Paddy) who will be delighted that you are out of this chair as anyone that knows Peggy knows she doesn’t drive,” he said.

“She would drive you mad, but she doesn’t drive herself.”

Following a flurry of laughter, the outgoing cathaoirleach was presented with a framed montage of her time at the county council’s top table by chief executive Paddy Mahon.