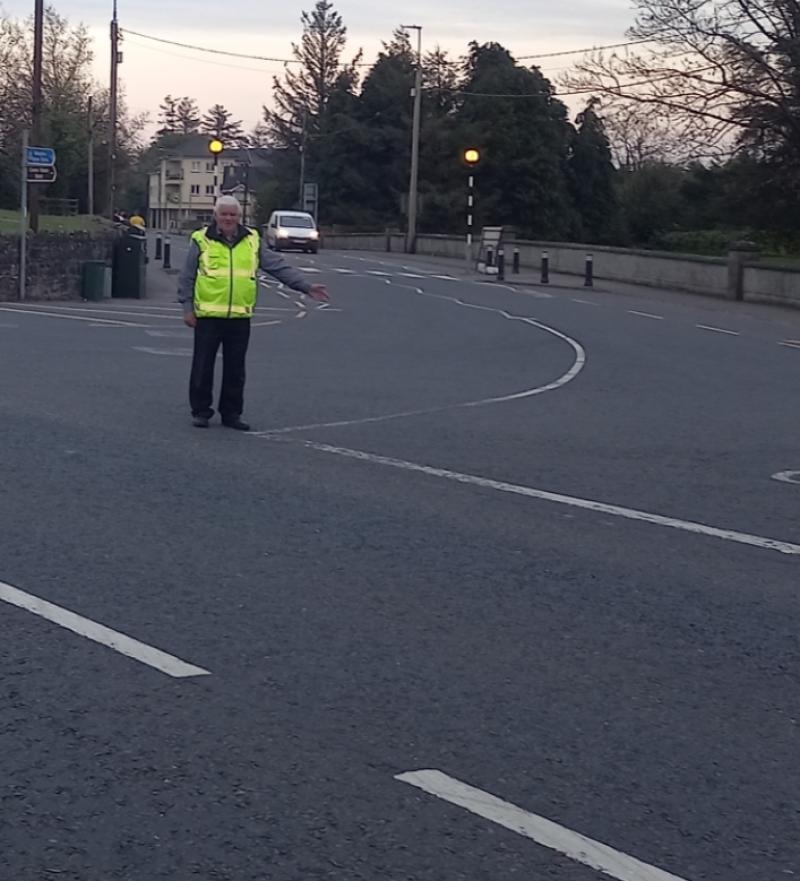 Cllr PJ Reilly at the troublesome junction in Granard

A junction located just off one of north Longford's busiest carriageways is an “accident waiting to happen”, it was claimed this week.

Cllr PJ Reilly revealed his fears over the safety of a turn off adjacent to Macken's Filling Station which branches off from the main N55 and onto the R194 Ballyjamesduff road.

The Fianna Fáil local representative issued the call at a recent Granard Municipal District meeting following what he described as a string of “near misses” over the past number of weeks.

“The design of this junction is just unacceptable for a junction like it,” he said.
Cllr Reilly said the layout of the junction made it especially hazardous for motorists approaching the town from the Abbeylara direction.

“You have to go far to far up the road and the danger is that cars coming from the other direction looking to turn left cut across too short.”

The long serving councillor revealed how local authority bosses have agreed to open talks with Transport Infrastructure Ireland (TII) officials in a bid to oversee a realignment of the road.

One possible solution, according to the Abbeylara based representative is the option of installing a mini roundabout or island.

“It is an accident waiting to happen,” said Cllr Reilly.

“The layout of the junction is all wrong and it needs addressing sooner rather than later.”

The call comes after a woman in her forties sustained critical injuries in a road accident involving a car and a lorry only a matter of hundred yards down the road.

She was flown by air ambulance to Tallaght University Hospital after the car she was driving collided with a lorry close to the town's Cnoc Na Greine housing estate at around 10:30am.

A young girl, who was also travelling in the car, was treated at Cavan General Hospital for what were described as non-life threatening injuries.

The incident, while in no way related to concerns surrouding the junction's safety, is an episode which could yet prompt road chiefs into taking a more sterner hand with its layout and accessibility.

“The bottom line is the way it (junction) is arranged needs revising and the quicker it is done, the better it will be for all road users,” added Cllr Reilly.