Pair to appear in court over alleged Longford street brawl

Two men are to appear in court in the morning charged in connection to the latest in a long line of violent incidents to hit the streets of Longford town in recent weeks.

The duo, who are aged in their 20s and late teens, were arrested by gardaí following an alleged public order incident in the car park of Longford Town Shopping Centre at around 6:30pm on Sunday evening.

A man aged in his 20s received medical treatment for non-life threatening injuries. 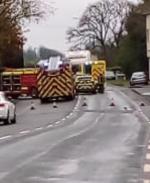 A female motorist injured in a car crash on the outskirts of Granard town at the weekend remains in a critical condition in hospital.

The older of the two suspects was arrested in the wake of the incident while his alleged co-accused was arrested earlier this morning, with both being taken to Longford garda station for questioning under Section 4 of the Criminal Justice Act, 1984.

The Leader can confirm that both men have tonight been charged by detectives and are due to appear before a sitting of Longford District Court in the morning.