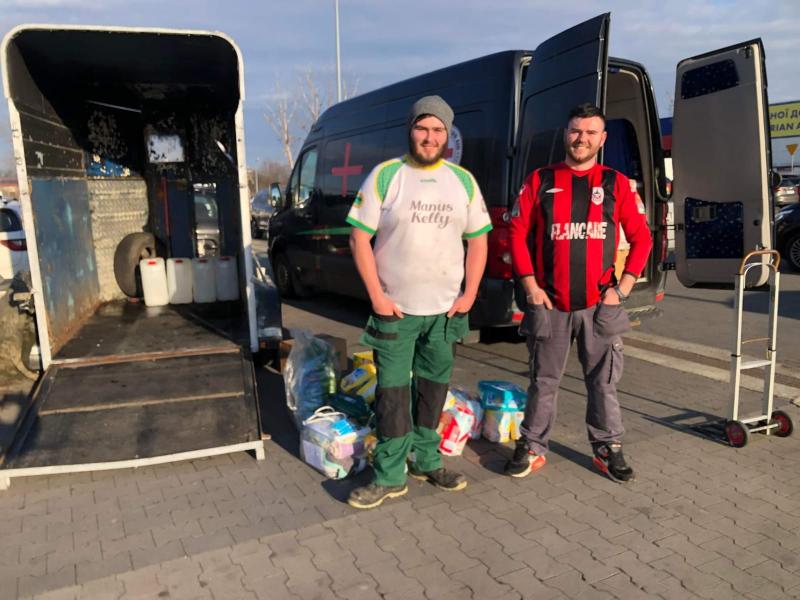 It’s a long way from Longford to Ukraine and back - almost five and a half thousand kilometres according to Longford lads, Conor McLoughlin and Darren Clarke who made the journey to deliver humanitarian aid to refugees in Przemysl.

Filling a jeep and a horsebox full of donations from the people of Longford, Conor and Darren set off at the start of April.

“I went around to a few people and asked them to bring in stuff and it kind of just escalated from there,” Conor explained.

“Nearly every day I was getting in boxes and bags of everything and anything - clothes, food, everything. And then after that we set up a GoFundMe to try and help with diesel costs, which was definitely needed. We went over in a jeep and horsebox.”

With the jeep loaded full of clothing, food, medical supplies and sanitary items, Conor and Darren drove from Longford to Rosslare where they got the Stenaline ferry to Cherbourt, in France.

Stenaline, eager to help the kindhearted lads out, provided them with a free fare to France to ensure they made it to their destination.

“We got the ferry over and back for nothing, which was great. That was nearly €700 saved,” said Conor.

“Without that we probably wouldn’t have went,” said Darren, noting the significant cost of fuel and travel in the current climate.

“Oh god no, we couldn’t have afforded it,” Conor agreed. “We drank nearly a grand in diesel. When you’re pulling a nearly a tonne behind you as well, it uses a lot of fuel.”

From Cherbourg, the lads drove for five days to Przemysl in Poland.

“That was some trek, it was just under five and a half thousand kilometres from Longford the whole way there and the whole way back again,” said Conor.

The lads took turns driving, sleeping at a German truck stop in the jeep on the first night - which they admitted was very cold - and staying at a hotel on the second night when they reached Poland.

On the third day, they arrived at the Przemysl refugee camp where they unloaded their supplies.

“The amount of Irish volunteers over there is unbelievable - people who have gone over on their own back,” said Darren.

“There’s no Irish Red Cross or anything like that, so everybody out there is getting money donated to them to stay out there. It’s tough on them as well I suppose.”

“Yeah it is, they’re taking it one day at a time but they don’t know when they’re coming home. They’re going to stay until it’s over, pretty much,” Conor agreed.

“We didn’t really know what to expect when we got to Przemsyl,” said Darren. “We got there safe and the reception we received was really, really good.”

Following their arrival, Conor and Darren received a tour of the facility where they saw refugees being processed so they could book flights to other countries.

“There’s people in there in the same camp from day one, still waiting to get into England and it probably still hasn’t happened,” said Conor.

“It’s fairly slow-moving. It’s grand if a bus turns up from Ireland. I know the lads from O’Haires went over and they brought back 13 adults and eight kids or something like that. If you’re going back to Ireland you can take them if your background check is cleared.”

“We met a Ukrainian family over there as well - a husband, wife, the wife’s brother and their children - they were going to Limerick,” Darren added.

“The woman’s brother is driving his old Lada all the way from Poland to Limerick. It was a serious amount of driving though. I did nine hours straight from the German-Polish border to the Ukraine border.”

Despite that, Conor and Darren said they would do it again “in a heartbeat” if they could. “The experience itself was great,” said Darren.

“Being able to help out made it all worthwhile. Without the people who donated items and money for fuel, we couldn’t have done it,” Conor agreed.

The GoFundMe link is still live for anyone who would like to donate. The link can be found at https://gofund.me/873b22a5.

'I'm nervous, but I want to do this': Hungry Horse Outside's Hazel and Hilary Robinson embark on 2,695km journey
ADVERTISEMENT - CONTINUE READING BELOW