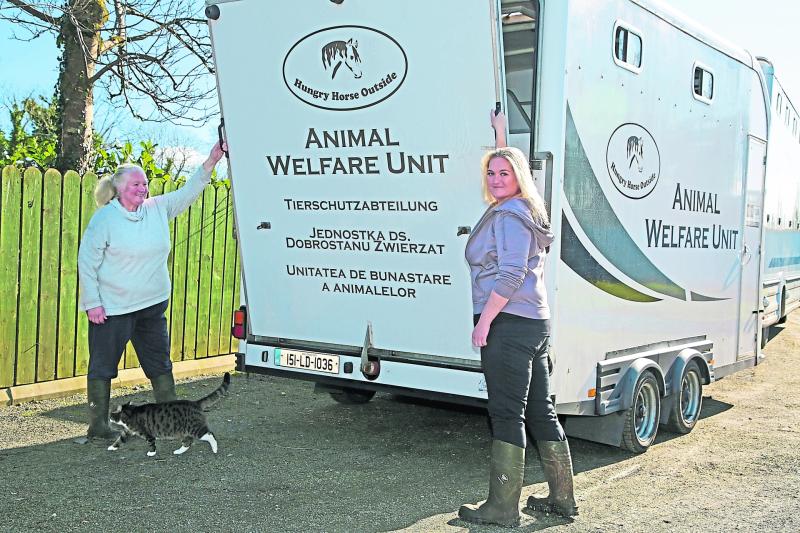 Longford's Hazel and Hilary Robinson are embarking on the long journey to Poland - by boat and by road - to deliver supplies. PICTURE: SHELLEY CORCORAN

It takes a little streak of madness to decide to get in your lorry and hand-deliver essential supplies to Ukrainians just across the Polish border, according to Longford woman, Hazel Robinson, who certainly has more than a “little” streak of madness in her.

“And it wasn’t off the ground I licked it,” she laughed, while in conversation with the Leader on Monday morning.

In fact, Hazel and her mother Hilary are both embarking on the long journey to Poland - by boat and by road - to deliver supplies this week.

The eyes of the world are firmly fixed on Ukraine as its people fight to keep their country from the grasp of Russian invaders, and people in Longford - and further afield - are doing what little they can to offer their support to those who need it.

And, despite being a rural county in the middle of a small state on the edge of Europe, what little we can do could prove huge to those in need.

Helping Hands Longford has begun a massive collection drive for Ukraine, with plans to transport donations of essentials to Poland later this week, thanks to a heroic offer of help from local charity, Hungry Horse Outside.

Hazel and her mother Hilary Robinson are in the planning stages of their journey, which will see them take a ferry to the main land before driving to Hrebenna, on the Polish border with Ukraine.

“When Russia hit Ukraine, everyone was in massive shock,” said Hazel, who runs a Facebook group called ‘Updates Ireland’, which currently has more than 181,000 members from across Ireland and beyond.

“One woman from Waterford said she was setting up a group and what she needed to collect. I wanted to get involved, so I did and then it started skyrocketing.

“They organised a point for people to drop off donations, and they wanted to set up a GoFundMe for transportation.

“Mam was in Germany rehoming horses, so she’s already on a trip. I rang her and I was telling her about the idea. I had it in my head, ‘I wonder could we do this’, so I rang her and she said ‘we could do this - we have the money in our Hungry Horse Outside account - we can do this and we can see if we can get stuff for animals too’.”

Hungry Horse Outside is an animal welfare organisation, which specialises in the rescue and care of horses and donkeys.

Currently, there are tens of thousands of Ukrainians seeking refuge in Poland, many of whom are women and children who have left their men behind to fight.

Photographs on social media over the past week showed many families fleeing their homes with their pets in tow - unwilling to leave behind valuable members of their families.

“There are a lot of animals struggling, so we’ll be bringing over pet food to them too,” said Hazel.

Donations have been flooding in over the past few days with Helping Hands Longford putting a call out for personal hygiene items, sanitary products, baby items such as food, nappies, etc, medical bandages, plasters, antiseptics, underwear and socks for all ages, sleeping bags, foil heat sheets, hats, gloves, scarves, pads for the disabled and those with special needs, non-perishable foods, etc.

“We’re trying to get as much as possible into the space we have - not so much clothes, but non-perishable items, big bottles of dettol, power banks,” said Hazel.

“Things that women will need. Because a lot of the men are fighting and the women want to be able to contact them, so they need to charge their phones because the next time they speak to their husbands or partners or fathers could be the last - and just imagine knowing that.”

After the woman in Waterford put out a call for donations on the Updates Ireland Facebook page, Hazel said the whole thing “just started flowering all over the country”.

“I was getting hundreds of messages in. It’s amazing to see a group of people from different backgrounds coming together for a cause,” she said.

“The spirit of the Irish people is unbelievable. We should be proud of our country and our people. Whenever there’s a time of crisis, the Irish come through.

“When something horrible happens, you’ll always see the light.”

Hazel and Hilary have booked their passage on the ferry for Thursday evening and estimate their 2,695km journey to the Polish border with Ukraine will take approximately two days.

“We’re about to embark on a trip of a lifetime,” said Hazel, who admitted to being nervous about travelling so close to the Ukrainian border but eager to offer assistance to people who are in need - an admirable trait in both Robinson woman.

“I have done so much in my life and I’ve shocked myself but this has trumped it all. I always said you need a small streak of madness and I have that. But I didn’t lick it off the ground,” Hazel laughed.

“I’m nervous. But I want to do this. It’s been a team effort and we’ll need more team effort but it’s amazing to see how good people have been.”

Hilary and Hazel will travel to Tramore on Wednesday to collect donations from there, before packing Longford’s addition to the delivery into their vehicle on Thursday.

“I’m concentrating soley on the collection and the transportation of the essential items,” said Hazel, stressing that any information on donating should be sought from Helping Hands Longford where Tena Keown and Geraldine McNally and their team are gathering items and preparing them to be transported.

Hazel and Hilary will be driving the Hungry Horse Outside lorry to Poland but, should it be required, Hazel will drive a second vehicle.

This collection will not be for clothing and large items, but rather the smaller items, which can be brought in bulk and distributed among more people, such as hygiene items, sanitary items, foods, dog foods, etc.

“Mam thinks it will take two days to get there, but I did hear once you get to the Polish border, you can be there for hours,” said Hazel.

“In the lorry we’re going in, there’s a small sleeping area that we’ll be sleeping in on the side of the road.

“What’s most important here is our community spirit and how good the Irish people are. We really don’t give ourselves enough credit.”

For more information on where to donate items and how to donate, see the Helping Hands Longford Facebook page.

Hazel and Hilary will be keeping people updated on their journey via the Hungry Horse Outside Facebook page along the way. 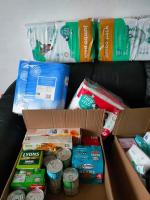