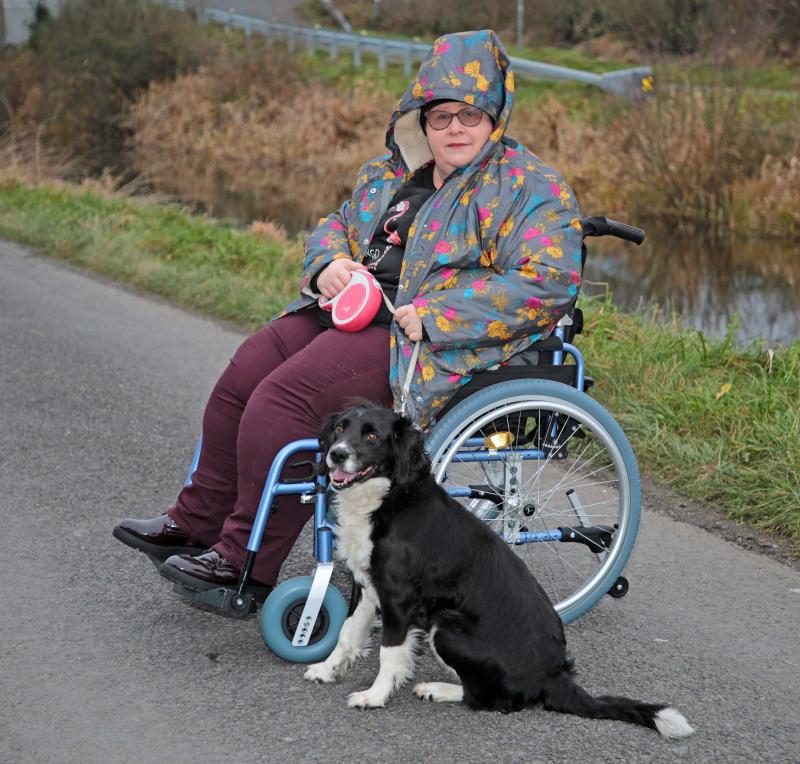 A Longford wheelchair user has spoken of how her life was saved by a group of heroic bystanders after accidentally falling into the Royal Canal.

Tracey Heighton had taken her dog, Holly, out for a walk on Sunday, December 12 when the handle of her pooper scooper became entangled on the backward lever of her disability scooter.

Seconds later, Tracey suddenly found herself underwater in an episode the Longford woman is still struggling to comprehend.

"Before I knew it or could react, while turning, I ended up reversing straight into the canal," said Tracey.

"My dog was attached to my waist under the scooter so she was pulling me under as she was trying to get out.

“I was swallowing water but managed to pop my head out and say: 'Release the dog'."

Courageous
Tracey said but for the courageous actions of passers-by she might well have drowned.

"I was swallowing water but managed to pop my head out and say release the dog.

"This wonderful stranger released my dog and managed to get my head out of the water.

"Despite her scooter and independence suffering as a result, Tracey said she believed her time spent underwater lasted no more than ten seconds as a members of the public helped pull her from the water.

"I am not by any means a thin person and I also had many layers of clothes on and as mobility is limited I was dead weight," she said.

"Another jogger appeared and then more strangers appeared and although they said I was in the water for about half an hour they put in massive efforts to get me out and into the recovery position.

"The entire time people came from nowhere with coats, blankets and many hands were constantly rubbing me to keep me warm and trying to keep me awake when I was so tired I just wanted to sleep."

A talented young man killed in a fatal road crash in Co Longford over the weekend has been remembered as an academic genius who touched the lives of all who knew him.

Ambulance wait
Tracey said she was forced to wait around 50 minutes for an ambulance to bring her to Mullingar Hospital where she was treated for suspected hypothermia.

Now back home and recuperating alongside her family and beloved dog, Tracey said she will be forever indebted to the daring actions of those who rushed to her aid.

"The people around me were simply outstanding," she said.

"Due to the nature of the accident I couldn’t see anybody to know who they were but they never left my side by putting coats and blankets around me to try to keep me warm with no worry to themselves.

"They were just amazing and I’d like to thank every one of them for saving my life, because I wouldn’t be here without them.

"They were the most amazing group of people who are absolute heroes and I owe them my heartfelt thanks."