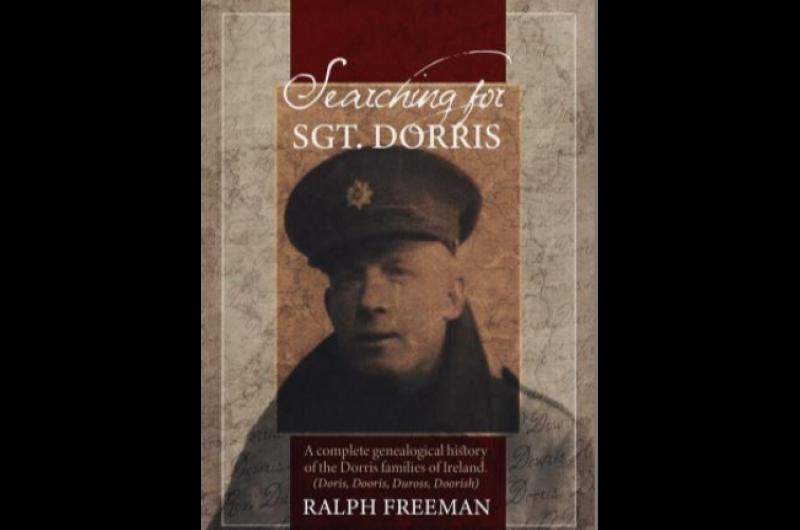 Longford has an extremely rich and interesting history which sets a backdrop for research for many authors, both local and non-local.

One of those authors, who dipped into his ancestry and uncovered a wide range of stories - including some from Longford - is Tyrone native, Ralph Freeman who recently launched his book, Searching for Sgt Dorris.

This book will be of great interest to those who study local family history or those who just love stories from memory lane.
The book contains the entire genealogy for the Dorris families of Ireland which include the surname variations Doris, Dooris, Doorish and Tourish.

The Longford chapter, the longest in the book, has some amazing stories, including soldiering in India, guarding Napoleon Bonaparte and immigration to Argentina.

With almost 1,000 other surnames also recorded in the book, many from the Monaghan, Tyrone and Fermanagh areas where the surname is also strong, it is a remarkable and insightful genealogical work, a treasure just waiting to be explored.

Inspired by his investigation into the death of his maternal grandfather, Sgt Charles Dorris, who was killed in Normandy in 1944, it took Ralph 17 years to research and ten years to write, in what he describes as‘a labour of love’.

During his extensive research he gathered together thousands of parish records and collected oral family history from all over the world discovering over forty different spellings of the surname.

With over six hundred pages containing nearly 6,000 historical records, dozens of maps and photos, not only from Ireland but the British Isles, Australia, New Zealand, the USA and Canada, he manages to bring more than four centuries of history together.

Within its pages you will find wonderful stories; encounters with the famous outlaw Ned Kelly, battles with the Maori in New Zealand, their exploits from the Napoleonic Wars and the Irish rebellion, emigration, shipwrecks and the unimaginable courage of wives and mothers.

One such story is that of James Dooris, who was a soldier, born in County Longford circa 1796 and who came from Soran. He first joined the 66th Foot Regiment ca 1814 and later the St Helena Regiment, part of the British East India Company. His surname was sometimes spelled Doras in military records.

St Helena is a small island in the mid-Atlantic and was a strategic stopping off point, and one the British and French had fought over many times. It also became the home of Napoleon who had been exiled there after his defeat at Waterloo, and it appears that one of the 66th Foot Regiment’s main purpose was guarding him.

Captain James McKeon of Rossmina House, Edgeworthston, who was the brother of Sean McKeon (Seán MacEoin) who became the Irish minister for Justice, claims to have stayed with James Dorris at Aghakeeran, Aughnacliffe.

The following extract relates to an account of an attack on the local RIC Barracks and the Black and Tans, some of whom were billeted in the old schoolhouse at Ballinalee.

“I was staying in James Dorris’s of Aughakieran, Aughnacliff when I heard the explosion of the mine at Clonfin... A few days afterwards the enemy surrounded the area with some thousands of men and thoroughly combed it for us. Seven or eight of us got through their lines and crossed Lough Gowna in a boat into County Cavan where we stayed for a day or so and then came back again to the Columcille area.

This book tells the stories that would otherwise have been lost forever; RIC men and soldiers, evictions, sheep-stealing, robberies and even the occasional murder. Incredibly brave wives and mothers, blacksmiths, gardeners, farmers and weavers, their stories are all told.

With the door to the past thrown open, the infamous characters and goings-on brought back to life and all their exploits, good and bad, gathered together, the result is an impressive genealogical history of Dorris families worldwide and an incredible reference for all genealogists. With historical facts laid out, you are left to decide who really was Sgt Dorris, and who were the Dorrises of Ireland.

Edgeworthstown Library: Book to be launched in brand new community library which opens this week