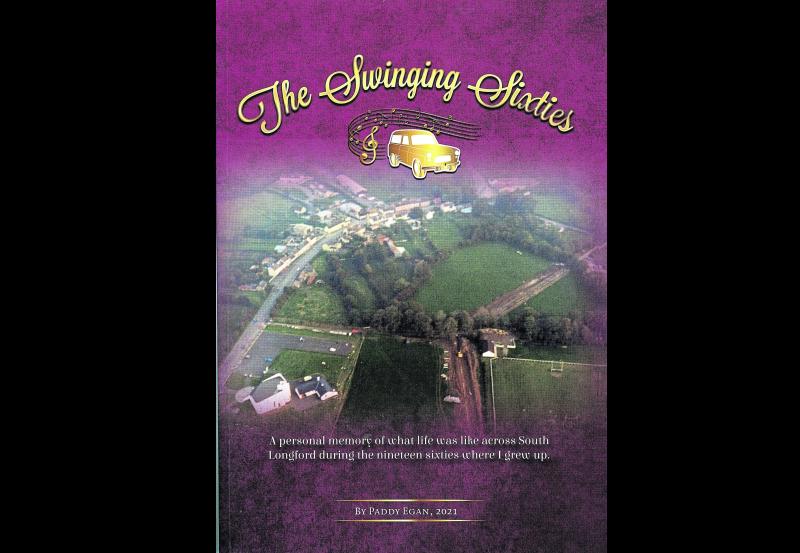 ‘Tis the season for book launches as we all start thinking of Christmas gifts for loved ones, while supporting local authors as they send their latest works out into the world.

One such work is The Swinging Sixties by Kenagh’s own Paddy Egan. A well-known author around the area, Paddy is big into keeping the history of Longford alive and, with this latest publication, he does just that.

The book is a personal memory of what life was like across south Longford during the 1960s where Paddy was growing up.

It’s a nostalgic look back at what life was like in rural Ireland as opposed to a history, bringing a personal touch to big events such as the coming of electricity, piped water, television, international radio, cars, tractors, free education, the relaxing of chuch rules, GAA, cheap air travel and much more.

The book tells tales of man travelling to the moon, the first heart transplant and there are many memories of the showbands and dances, with particular emphasis on the Reynolds era in Longford.

Paddy also writes his personal memories of events from the demise of the Mosstown Estate to the shooting of President JF Kennedy.

“I started writing it when Covid started,” Paddy told the Longford Leader, “I handwrote 400 pages.

“A good quarter of the book is about showbands and ballroom with advertisements for dances and the involvement of the Reynolds family.”

Included in the book is a series of advertisements from the Longford Leader, spreading the word about dances and other events.

There’s also a large number of photographs from the time, portraying fashion, houses, beauty parlours, cars and other images synonymous with the 60s.

“In my last publication, volume on of ‘An Áit Nar Togad Mé’, or ‘The Place Where I was Reared’, I gave an account of what life was like growing up around Kenagh during the 1940s and 50s,” said Paddy in the foreword.

“It was intended to be a personal memoir of what my life was during and after the war years, in other words, the Emergency.

“In this publication, I will try to record what life was like around Kenagh through the 1960s, what was known as the ‘swinging sixties’ will see huge changes to the lives of the rural population around Kenagh.”

The Swinging Sixties will be launched in Ballymahon Library at 8pm on November 24 by County Heritage Officer Mairéad Ní Chongaile.

The book retails at €10 and is an ideal Christmas present- especially for those overseas.