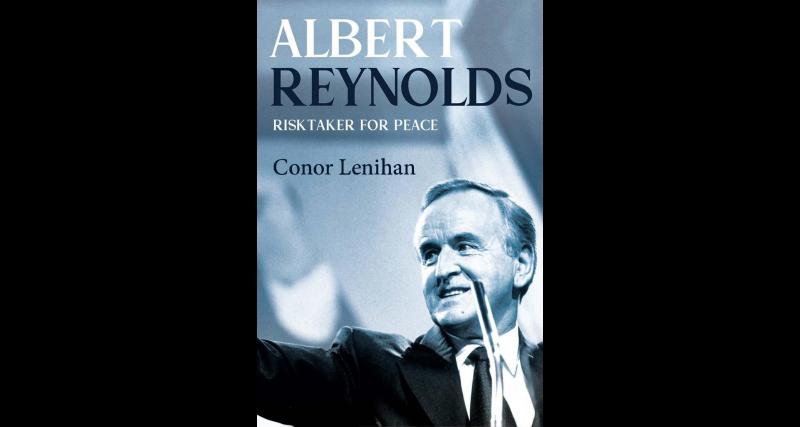 ‘Albert Reynolds: Risktaker for Peace’, written by Conor Lenihan and published by Merrion Press, is on sale now: €22.95

Former government Minister and Fianna Fail insider Conor Lenihan has penned the first full biography of Albert Reynolds, providing an all-round portrait of Reynolds’ determined climb to power and swift descent amid a maelstrom of controversy.

Albert Reynolds: Risktaker for Peace covers both Reynolds’ business and political life before and after his period as Taoiseach.

The risk takers and peacemakers travelled an oft unpopular road

Northern Ireland’s peace process would not have come about had it not been for the part played by former taoiseach Albert Reynolds, former British Prime Minister Sir John Major has said.

From his early days in Roscommon and Longford, Reynolds’ determination and hard work saw him rise from a clerical job with Irish Rail to become one of Ireland’s best-known promoters. But it is as creator of the template for peace on the island of Ireland that he, deservedly, will be best remembered.

Reynolds made his first fortune as a dancehall promoter. In the 1960s, still only 30, he became rich beyond his dreams, married, bought a home outright, and built a strong business reputation.

Reynolds’ extraordinary progress from the cut-throat world of business to local politics, and, ultimately, government ministries, was driven by the entrepreneurial spirit and impatience that became the hallmark of his success and his failure.

Appointed as Taoiseach in 1992, by 1994 he had been drummed out of office, yet in that brief period he confounded his critics by fast-tracking an end to the violence of the Troubles, with the IRA and Loyalist ceasefires.

It is in detailing the personal courage of Reynolds, as he persuaded paramilitaries to drop their lethal campaigns of violence, that the book’s subtitle becomes increasingly apparent.

Reynolds met directly with members of the IRA at a time when they were escalating their attacks. He was constantly warning John Major that MI6/MI5 were misreading IRA intentions – and Reynolds was actually far more aware than most of his contemporaries just how dangerous the IRA threat to the southern state was.

Quoting intelligence sources, and Reynolds’ privately held views, the author reveals that the British authorities were spooked by IRA attacks on the City of London financial district. He also reveals a daring bid by the IRA to bring market trading in London to a standstill – an operation prevented by a timely raid by the Irish Special Branch.

The close personal and professional relationship enjoyed between the late Albert Reynolds and his British counterpart Sir John Major has been described as nothing short of “remarkable”.

This is an insider’s account of the Reynolds life, and Lenihan gathers insight from his time as a journalist, intermediary, and political colleague to paint Reynolds in a fresh light.

During his career as a journalist and a fourteen-year stint in politics, Conor Lenihan worked and became friends with Albert Reynolds, who co-opted him, behind the scenes, to help with the peace process. Lenihan’s first book, the bestselling Haughey: Prince of Power, was published in 2015.

‘Albert Reynolds: Risktaker for Peace’, published by Merrion Press, is on sale now: €22.95.

Today, 26 years ago (February 11, 1992) the late Albert Reynolds was formally ratified as Taoiseach.