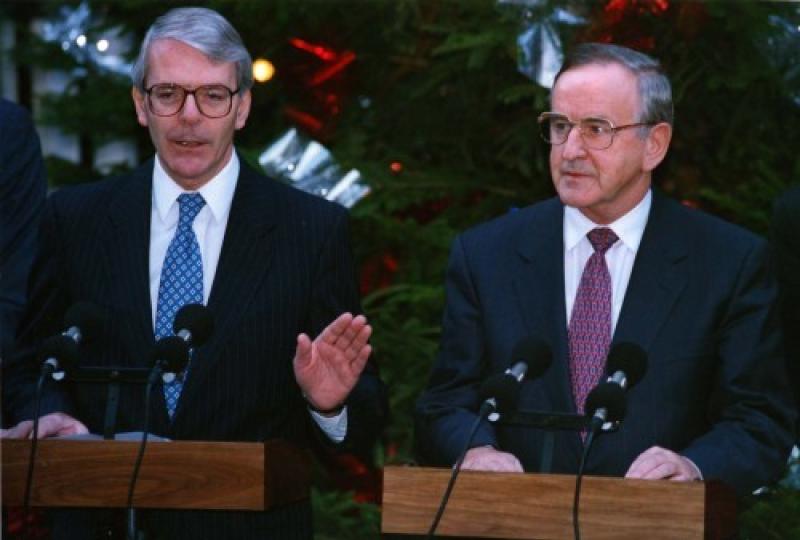 Fianna Fáil leader Micheál Martin TD welcomed Sir John Major to Longford in his speech at 4pm and said that it is "a great pleasure" to join in him Longford today in "a very fitting tribute to Albert Reynolds".

"Albert is a man whose reputation has quite rightly continued to grow as the years have gone on. This proud son of Longford was a moderniser and a practical man of action.  Through tough economic times he built an international business from scratch," Micheál Martin said.

"As a Minister he was always direct and effective in delivering even the toughest of programmes – indeed as Minister for Posts & Telegraphs he transformed the communication infrastructure in this country, and the programme he implemented was much more complex than projects which today are defined by delay and controversy.

"And of course as Taoiseach he helped complete the foundations for a major and sustained period of peace and economic growth.  The Maastricht Treaty and structural funding budget which he negotiated marked a dramatic step forward.  He built strong relationships with the Clinton administration and our European partners.  Each new challenge was met and overcome through a single-minded focus on the best outcome for all.

"Of course the most important relationship which he built was with our guest today.

"Albert Reynolds and John Major were on the face of it an unlikely partnership.  There had been no tradition of close relationships between Taoisigh and Prime Ministers.

"Their immediate predecessors had a famously difficult relationship.  Certainly there are few organisations which have shared as little in common as Fianna Fáil the Republican Party and the Conservative and Unionist Party.

"Yet the Dublin/London axis led by Albert Reynolds and John Major became so strong that it was capable of making unquestionably historic progress.

"Perhaps part of this is that when you look closer you can see that they actually shared quite a lot in common.  Both were from modest backgrounds and did not have the benefit of networks built up through elite education or family connections. Everything they achieved was because of their abilities, and they brought this meritocratic approach to politics.

"They shared an ability to reach beyond traditional barriers and were willing to take risks in the interests of the common good.  They knew how to build and use trust.  They were certainly not politicians focused on the short-term and image – something which often damaged them at the time but has caused their statures to rise as time proceeds.

"As part of this they were always at their most effective on the issues which mattered the most.

"Albert once said “it’s the little things which trip you up” – but he should have said that it’s the big things that history will remember and for which you will be honoured.

"I think there is a lot which we can learn from the Reynolds/Major partnership which is ever-more relevant for us today.  I would like to mention three points in particular.

"First of all is how a strong relationship between Government of Ireland and the British government is pivotal to achieving serious progress on the many issues of concern to both of our countries.

"In the past these contacts had been defined by a focus on the crisis at hand and only erratic ongoing contact.  During the Reynolds/Major years an entirely new dynamic developed which was close and confidential – and which set a tone for ministers and staff to follow.

"In fact, the more serious the issue the more likely they were to keep disagreements between themselves quiet and they absolutely never tried to grandstand or speak at each other through the media.

"Of course they had their disagreements, but they respected each other and understood that the United Kingdom and Ireland share so many interests that they should always seek to be close allies.

"In the Council rooms of Brussels or in nearly endless, complex and understandably emotional discussions about Northern Ireland, Downing Street/Merrion Street cooperation achieved great things for the people of these islands.

"In later administrations the tradition which they established continued to define relations between the governments.  They had shown the way and set a new expectation of their successors.

"The relationship between Bertie Ahern and Tony Blair was built on the Reynolds/Major foundations.

"All who saw it remember how much they understood that peace in Northern Ireland demanded that they work together and set it as an absolute priority.

"The Good Friday Agreement was a victory of leadership and for democratic politics.

"And this approach also continued under Brian Cowen and Gordon Brown.  Even though they faced immense political and economic challenges, they remained in constant contact about Northern Ireland and always put peace first.

"At the very height of a financial and economic crisis worse than anything for 70 years, they were always available to lead and to overcome deep crises in Northern Ireland.  This included financial packages directed at developing Northern Ireland which both governments had to take tough choices in order to provide.

"The next significant point I think we should remember from the Reynolds/Major partnership is how important Europe has been as a shared space for our countries to develop their relationship.

"It was at meetings of finance ministers that they first got to know each other and started working together on joint concerns.

"As heads of government, EU Council meetings provided the opportunity for them to work together on much wider concerns.

"Any minister in the past four decades will tell you how Irish and UK ministers and officials have worked closely together in Europe and this has helped move forward the unprecedented reconciliation between our countries.

"The loss of this shared forum because of Brexit is an enormous challenge which we need to start addressing.

"The final point which the partnership of Albert Reynolds and John Major should remind us of is the value of substance over presentation in true leadership.

"Both struggled to master rapidly speeding news cycles and the growing demand for a rapid response and judgement on everything.  However they kept their eyes firmly fixed on trying to move everyone forward.

"The early years of the peace process involved both governments taking significant risks which threatened their short-term political situation.

"Albert Reynolds took tremendous risks investing the full force of his office in trying to drag people who had grown up with an absolute belief in violence as a political weapon towards recognising democracy.

"He had to face-down considerable objections in Dáil Éireann and in the media at a time when he had to manage a difficult political situation.

"John Major too took many risks for peace.  If you look back at the newspapers from the six months before the Downing Street Declaration you find regular commentary about how he would supposedly not be able to achieve anything because he needed the votes of Ulster Unionists in the House of Commons.

"This day next month it will be two years since the Assembly and Executive were collapsed over an issue which in terms of scale and substance is nothing in comparison with the challenges that were overcome in the 1990s.  Yet the absence of leadership is palpable and the sense of uncertainty about the future is growing.

"Sir John, your presence here today to give the Inaugural Albert Reynolds lecture is a great and worthy tribute to Albert and it is a reminder to us all of the values and leadership shown by both of you at a critical moment in our history.

"I have no doubt that were he here today Albert would want us to acknowledge your passionate advocacy for Northern Ireland during the Brexit referendum when so many others ignored it and also how you have been a steady, reasoned and determined advocate for limiting the damage of that terrible campaign.

"Once again, thank you for attending today and for honouring the spirit and achievements of Albert Reynolds."