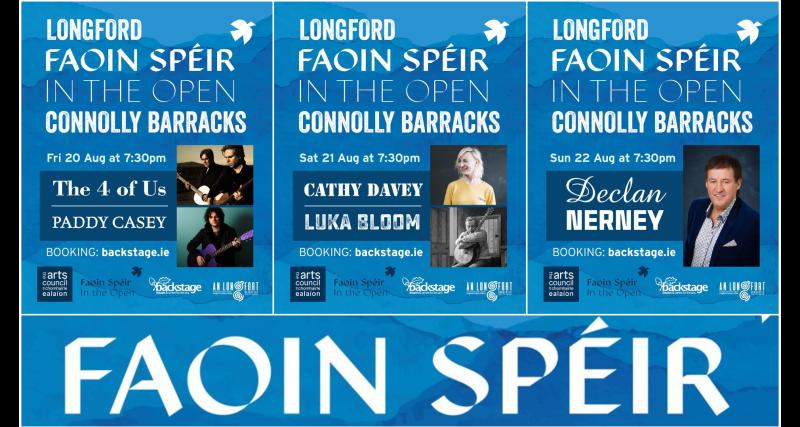 The highlight of the summer is just ahead as Longford County Council, in association with Backstage Theatre and funded by the Arts Council of Ireland brings yet another weekend of live music to the stage at Connolly Barracks.

Under the Faoin Spéir initiative, this weekend music fans will be treated to Irish rock, pop, folk and country royalty all in one location as Paddy Casey, The Four Of Us, Luka Bloom, Cathy Davey and Declan Nerney take to the stage at the former military headquarters.

No sporting organisation was immune to the impact of the Covid-19 pandemic, and during 2020 Longford Community Games ceased all activities in the interests of the safety of all participants and volunteers.

Backboned by the bulk of the best players in the county, it is difficult to look beyond Killoe and Mullinalaghta getting through to contest the 2020 senior football championship title decider.

To date, Longford County Council in association with Shane Crossan’s Republic of Culture, has delivered an incredible 34 live music events, across 23 locations in the county.

Over 2,400 people have attended the free concerts under the ‘Live & Local’ initiative already, making Longford County Council a true leader in the battle to save the arts and entertainment industry, following the impact this devastating pandemic has had.

While other counties are only beginning to organise live events, Longford County Council was the first local authority in Ireland to mobilise its ‘Live & Local’ programme on July 9.

Organisers have battled every element along the way, from high temperatures to high winds and the odd rain shower throughout but even the Irish weather hasn’t dampened the spirits of gig-goers who have been so long starved of live music and this weekend is set to be the pinnacle of the calendar with five headline acts appearing over three days.

If you haven’t yet seen any of the gigs so far – not to worry. You are in for a real treat this weekend. The Faoin Speir Music Concerts take place in Connolly Barracks, Longford this weekend Friday 20 to Sunday 22 August.

Sure to be a hit, The Four Of Us with special with guest Paddy Casey play on Friday night at 7:30pm. This will be Paddy Casey’s first live performance since launching his new album on 8 August. The Murphy Brothers from Newry, otherwise known as The Four Of Us will then take to the stage to deliver among others their hits like ‘Mary’ and rock anthem ‘Drag my bad name down’.

Saturday night sees a double bill of Luka Bloom and Cathy Davey. Mastering his craft of song and sound over a 40-year tenure, Luka Bloom has become one of Irelands most celebrated singer songwriters. He can reimagine songs of any genre and make them feel brand new with his trusty acoustic guitar. Luka is followed by the chic pop tunes of Cathy Davey and her band. “Reuben", “Moving" and “Sing for Your Supper" are just a few of her expertly composed alternative pop anthems.

Rounding it all off on Sunday is the Longford country legend - Declan Nerney. This will be Declan’s first gig in his native county in almost two years and he’s looking forward to meeting all of his fans again.

Tickets are €20 and are limited to 200 at the outdoor seated venue in Connolly Barracks, Longford town. Tickets available from Backstage Theatre Longford by calling 043 33 47888 or www.backstage.ie .

#FaoinSpéir Longford is an initiative by Longford County Council in partnership with Backstage Theatre Longford and funded by the Arts Council of Ireland.