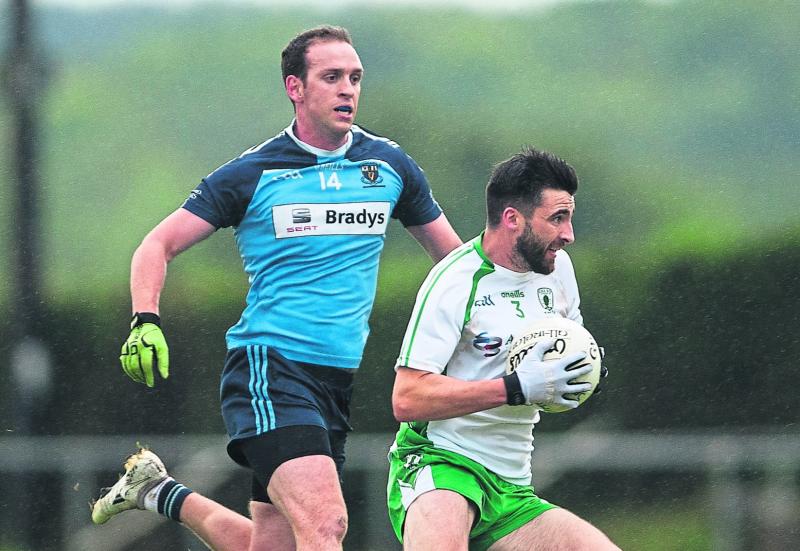 Liam Hughes on the ball for Killoe ahead of Slashers opponent Andrew Dalton. Action from the recent Division 1 league game at Emmet Park Pic: Ken Keenan

Backboned by the bulk of the best players in the county, it is difficult to look beyond Killoe and Mullinalaghta getting through to contest the 2020 senior football championship title decider.

The curse of the Covid pandemic struck at the end of September last year as the Connolly Cup semi-finals were postponed indefinitely but both games will eventually be played this weekend at Glennon Brothers Pearse Park.

Emmet Og looked good in their comprehensive win over Longford Slashers in the Division 1  league clash a couple of weeks ago with Michael Quinn and Liam Hughes the anchormen in the heart of the defence.

The lethal Killoe full-forward-line of Larry Moran, Daniel Mimnagh and Mark Hughes clocked up a total of 1-9 between them against Slashers while wing forward Eamon Keogh was in flying form in firing over three points.

With this sort of scoring power in a razor sharp attack, it will be a major surprise if they fail to master Mostrim in the first semi-final this Saturday evening, throw-in 6pm.

The Edgeworthstown side, under the guidance of new manager Ray Hussey, will work hard in a determined bid to give it their best shot but will probably fall short against the stronger Killoe side.

While powerful midfielder John Keegan is an injury doubt for Mullinalaghta, they are highly unlikely to slip up against Slashers in the second semi-final on Sunday evening, throw-in 6pm.

How do you stop such a vastly experienced team laced with a lot of quality and leading the charge for St Columba’s will be current county players Patrick Fox, Donal McElligott, David McGivney and Rian Brady.

Apart from former Cavan star Cian Mackey, another big threat in a slick attack is the driving force of James McGivney and the general opinion is that the young Slashers side will not be able to match the might of Mullinalaghta with Ciaran Fox now in charge.

The centrepiece of the unfinished 2020 Longford championship action is the Intermediate final at Pearse Park on Sunday (throw-in 2pm) with Ardagh Moydow seemingly set for success even without the injured Daryl Carrigy.

St Brigid’s Killashee will be missing the retired Skelly brothers Willie and Emmet and will be hard pressed to regain the Gerry Hennessy Cup they last won back in 2016.