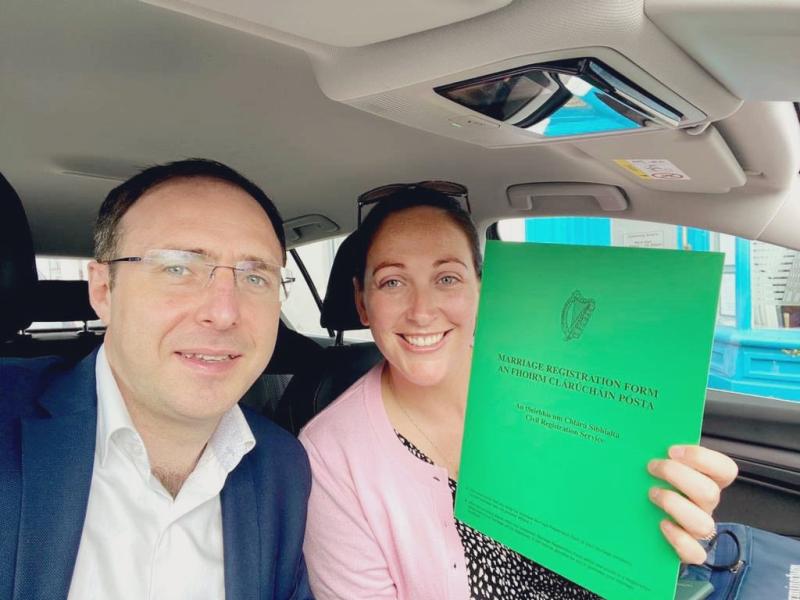 Longford / Westmeath Fianna Fáil TD and Minister of State for Trade Promotion, Digital & Company Regulation, Robert Troy has been wished well by his political colleagues ahead of his marriage ceremony today where he will tie the knot with Aideen Ginnell.

Minister Troy publicly announced their love coalition - his engagement to Aideen - in April 2020, on the same day that the leaders of Fine Gael and Fianna Fáil reached an historic agreement on a policy framework document with a view towards forming a coalition government.

Announcing their engagement, the Ballynacargy native, who successfully contested the last three general elections - 2011, 2016 & February 2020, said, "Aideen has been with me through it all and is my very best friend and now I am delighted to say will become my wife."

A late one in the Dáil last night to pass the legislation to get indoor hospitality back open, safely.

Thank you to my colleagues & all who have wished Aideen and I well for today, I’ll be taking a few days and will be back to work early next week

In May, Minister Troy revealed the wedding date and he thanked his colleagues and all who wished Aideen and himself well for their big day.

He added, "I’ll be taking a few days and will be back to work early next week."

So it’s official - permission from the state to get married‍♀️

On July 1, Minister Troy tabled a very important parliamentary question to Health Minister Stephen Donnelly, asking the number of guests who will be permitted at wedding ceremonies and receptions over the coming months?

Minister Donnelly replied, "As the Deputy will be aware, 50 people can currently attend a wedding service (both religious and civil) and 25 people can attend a wedding celebration or reception. On June 29, Government announced the next phase of reopening the economy and society in line with Recovery and Resilience: The Path Ahead.

"While a number of higher risk indoor activities will not recommence as planned on July 5, pending the implementation of a system to verify vaccination or immunity status, it has been announced that, as an exception, weddings already planned will be allowed to proceed with the planned increase in the number of guests to 50 at the wedding reception with protective measures.

"While significant progress is being made in relation to the roll-out of our vaccination programme and the current situation is broadly stable, the prevalence of the more transmissible Delta variant is rapidly increasing in Ireland and this poses a significant risk, in particular to those who are not yet fully vaccinated.

"As we further ease public health measures, our approach must continue to be cautious, gradual and phased, with sufficient time between any easing of measures to assess the impact. This will be critical to ensure that our progress in controlling the virus is maintained. Significant and sustained progress has been made on suppressing the virus over recent months due to the huge effort of people across the country. By working together, we have saved lives and limited the impact of the disease on society in Ireland. To protect the gains of recent months we must continue to practice basic preventative behaviours and to follow public health guidelines."