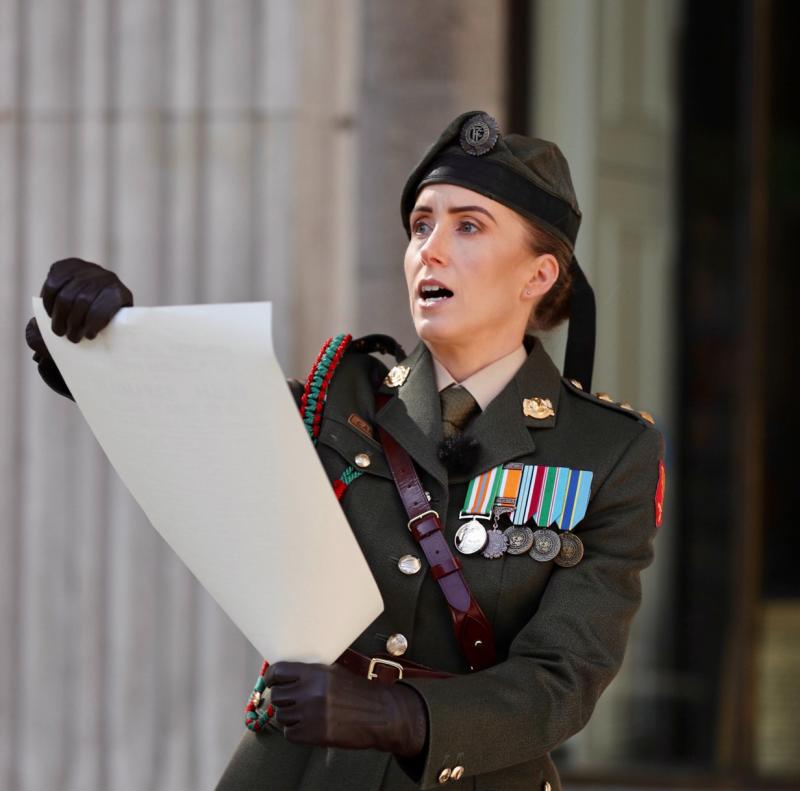 Longford's Captain Marie Carrigy had the honour of reading the Proclamation outside the GPO as part of the state commemoration ceremony marking the 105th anniversary of The Easter 1916 Rising.

It is the second consecutive year for a Longford Defence Forces representative to have the honour of reading the Proclamation as in 2020, Ballinamuck's Captain Darren Reilly was centre stage.

Last year was the first 1916 commemoration with no public involvement owing to Covid-19 restrictions and Capt Reilly described it as ‘a very surreal experience’ with ‘some poignant words, especially in the new world we face today’.

Also read: A huge honour for Ballinamuck's Capt Darren Reilly as he reads the 1916 Proclamation outside the GPO

Ballinalee woman Captain Carrigy, daughter of Séan and Maureen, is no stranger to being in the spotlight at The Easter 1916 Rising commemoration and in 2018 she was MC for the ceremony, where unlike today, O'Connell Street was thronged with people.

Captain Carrigy, who has 13 years service in Óglaigh na hÉireann, also represented her county with distinction in ladies football and she played her club football with Killoe.

A member of the Cavalry Corps, the former Meán Scoil Mhuire, Longford student, has served overseas in the Golan Heights (2014), Lebanon (2016) and The Congo.

Also read: Longford woman defending and protecting those who need it most

The Proclamation is read by Captain Marie Carrigy from Co Longford during the annual commemoration of the 1916 Easter Rising at the GPO in Dublin pic.twitter.com/AtcKcvwUIz

Captain Marie Carrigy reads the Proclamation outside the GPO as part of the commemoration ceremony marking the 105th anniversary of The Easter 1916 Rising. #ÓglaighnahÉireann would like to wish the people of Ireland a safe and #happyeaster