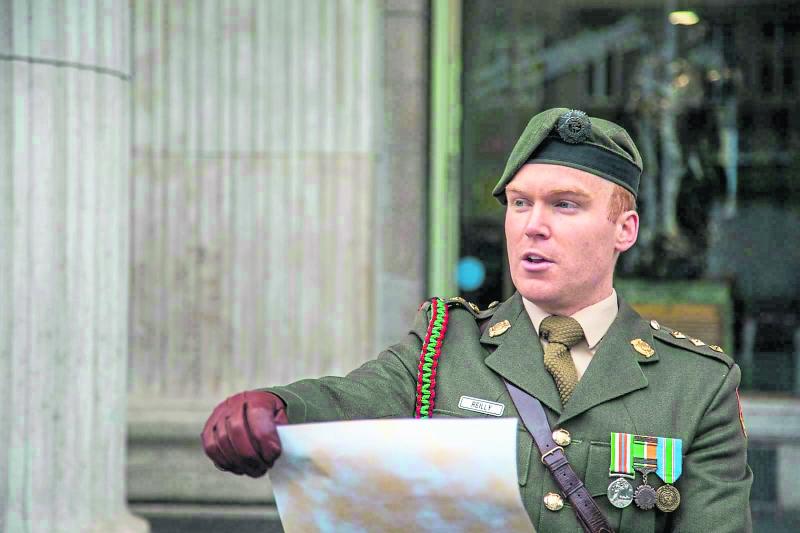 Easter Sunday 2020 will always be remembered fondly by Longford’s Captain Darren Reilly who had the honour of reading the Proclamation outside the GPO on Dublin's O'Connell Street, marking the 104th anniversary of the 1916 Easter Rising.

There was an eeriness to the entire commemoration as there was no public involvement this year due to the restrictions imposed to deal with the Covid-19 coronavirus outbreak.

The ceremony, which was broadcast live, was led by the Supreme Commander of Óglaigh na hÉireann, an tUachtarán, Michael D Higgins with the ringing of The Peace Bell at Áras an Uachtaráin and the playing of a Piper’s Lament.

This was followed by the lowering of the National Flag to half mast on the GPO rooftop, a Prayer of Remembrance by Head Chaplain to the Forces, Fr Seamus Madigan, in the GPO inner courtyard, and the reading of the Proclamation by Captain Darren Reilly in front of the GPO.

Ballinamuck native Capt Reilly said afterwards that it was “an absolute great honour to read the proclamation in front of the GPO.”

He described it as ‘a very surreal experience’ with ‘some poignant words, especially in the new world we face today’.

Twenty-eight years old Capt Reilly Joined the Defence forces in 2011. He was commissioned into the Cavalry Corps in 2013.

He currently works as Liaison Officer to the Ombudsman for the Defence Forces and holds a Bachelor of Corporate Law, NUIG (2018).

"Well done to Darren Reilly who had the great honour of reading the 1916 Proclamation from the GPO on Easter Sunday," remarked Club PRO Pauric Gill.

Renowned as a tight marking defender, Capt Reilly was part of the Longford minor panel that won the Leinster championship in 2010.

Pauric pointed out, “Darren has been a solid corner back for us for years. It may be a cliché but I think the term tigerish would definitely be appropriate for him.”

In addition to last year’s intermediate county medal, Darren won an U21 championship medal in 2013 and he has won all the underage medals with St Vincent's: U14 league, Féile, championship, U16 championship and the Minor Championship in 2010.