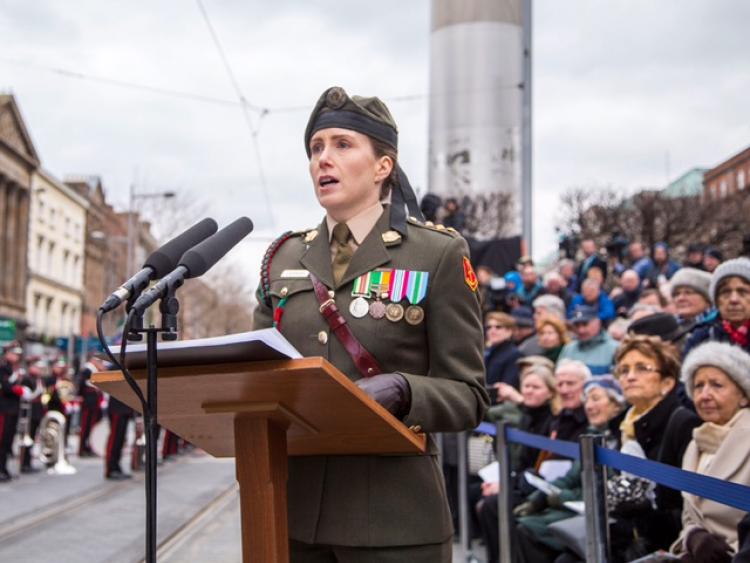 Captain Marie Carrigy from Ballinalee was the MC at the Easter Commemorations in Dublin.

It’s not too many Longford folk who can lay claim to being a member of the Irish Defence Forces, but for one Ballinalee woman her entry into the arena was a dream come true.

Captain Marie Carrigy, daughter of Séan and Maureen, applied to the army at the age of 24, having become a physiotherapist and securing a permanent job in the field right here in Longford.

The local army captain also played football at club level for Killoe and was one of the most recognised faces in the intercounty scene.

But it was her role as MC at the recently held Easter Commemorations outside O’Connell Street’s GPO that brought her to national attention.

She says that despite going to university and establishing a career for herself, the army continued to gnaw away at the back of her mind and, as she headed into her mid twenties, she took the bull by the horns, as they say and filled out the application form!

And it appears to have been an exhilarating journey For her so far, with plenty more to come by all accounts.

“I suppose the army was always at the back of my mind - I remember reading the brochures when I was in Scoil Mhuire and thinking how much I’d like to join, but I didn’t have the stones, for want of a better word, to do it when I was in Leaving Cert.”

Captain Carrigy says, now looking back, that it was the best decision of her life and indeed it is clear that she has “never looked back” since.

“When I qualified as a physio, they were crying out for them at the time and I got a job at home which I was very lucky to get, but I wanted a change and I decided to give the army a go; I knew that it was going to be either for me or not.

"I had done a bit of research and talked to a few people about it,”she added, before pointing out that she then found herself becoming more and more interested in joining the Irish Defence Forces.

“I also tried to be as honest as I could be during the application process because I knew that if it wasn’t for me it wouldn’t be the best place to be.
“I was lucky enough to get in to be honest with you and it was one of the best decisions I ever made.”

That was 2007 and Captain Carrigy went on then to complete her training in 2009.

11 years on and it appears the sky is the limit for the local soldier.

She has served overseas on two occasions, accessed numerous educational opportunities and has taken her place on the podium as MC during the annual Easter Commemorations in the capital.

“I got asked to MC at the Easter Commemorations and do you know what, an opportunity like that was great,” the local woman added.

“An awful lot of work and preparation goes into that event; it went off very well and is a testament to the guys.
“It was a huge event not just from a military point of view but also from the perspective of a lot of civilian organisations too; it was a great day, it went well and it really was nice to be part of it all.”

Meanwhile, the local captain is now working as a member of the HR team within the organisation.

“I suppose you do have to be a particular type of person; the training is robust and mentally and physically it is very demanding,” continued Captain Carrigy.

“The Cadet training lasted about 16 months and I did that down in The Curragh; I got posted to a Cavalry unit at The Curragh then - one of the few Cavalry units left in the country and it was a nice connection to Longford too.

“In The Curragh, I spent most of my time in the First armored Cavalry Squadron; got overseas then to Golan Heights which was my first trip overseas, and that was in September 2014.

Since then, the Ballinalee woman has returned to The Curragh and undertaken a second trip overseas, this time to south Lebanon in November 2016 with the United Nations Disengagement Observer Force (UNDOF).

“It has been an amazing experience for me to have served in two different areas overseas to be honest,” she smiles.

“It was great to see two different countries and experience those operational areas as well.

“The areas I have spent time in - while they are very close to each other - there are very different circumstances in each; you have to train for all eventualities when you head out to areas like those - some are perceived as more dangerous than others, but then it just depends on what is actually going on.”

“I was able to see two different countries as well as two different operational areas and operationally, UNDOF would have been perceived as a little more dangerous, but again that all depends on what is going on at the time,” the local Captain continued.

“For the majority of us, we are a million miles away from the strife and conflict in wartorn areas like the Lebanon and Golan Heights regions.

“We would do a lot of training before going out to these areas so we are well prepared for what is ahead and our personal support service helps with the human side of things as well.

But, she adds, being actually there is “a slightly surreal experience”.

“What strikes you most in these situations I think is that they are the same people as you and I going about their lives in the same way as we do and all with the same goals, ambitions and dreams.

“They have the same type of jobs; they sell and buy goods the same as we do; they teach and work just like us, but, unlike us, they carry out their daily lives under much harder and much more difficult circumstances.

“In Syria for example, a lot of people had professional jobs in Damascus; many were engineers, doctors, teachers and then suddenly they can’t go to the city - they can’t get to work or university.”

Captain Carrigy says that many were forced to return to where they could sell goods locally so as to provide a basic living for their families.

“It’s the change in circumstances for those people and how they cope with that strikes a cord,” she continues.

“When you see how people cope and keep going, it shows you their resilience and strength of human nature and that for me has been a very eye-opening experience.

“When you experience something like that it makes you realise how lucky we are here in Ireland.

“There isn’t a war here and no matter what happens, nothing really changes for us; yes we do face challenges every day, but they are different to those faced by people living in war zones.”

Meanwhile, the well-known Longford woman has her sights set on returning overseas soon and gaining as much experience in all aspects of the Irish Defence Forces as she can.

She is focused and determined, but also practical.

“Army training develops your skills and your character,” she smiles.

“You learn so much and that is why I love what I do - you are always learning new things and the variety that you get in the job is amazing.

“Why I do what I do is down to variety and also the friends that you make.

“The camaraderie is just so good.

“Once you come into the army, you find your niche - there is something for everyone and that really is the truth.

“There is so much diversity within the organisation - whether its driving an armoured vehicle, working in IT, diving, engineering - it’s all there in the Defence Forces.

“There is such a huge variety there for women and men right across the board and now education is really, really strong within the organisation too and that in itself provides so many opportunities as well.”

The Irish Defence Forces is currently recruiting for both army and navy personnel.

“The opportunities are there for people and I would certainly recommend it for a career,” added Captain Carrigy.

“It’s training that will stand to you and give you a leg up for the rest of your life.”

For more information check out www.military.ie.