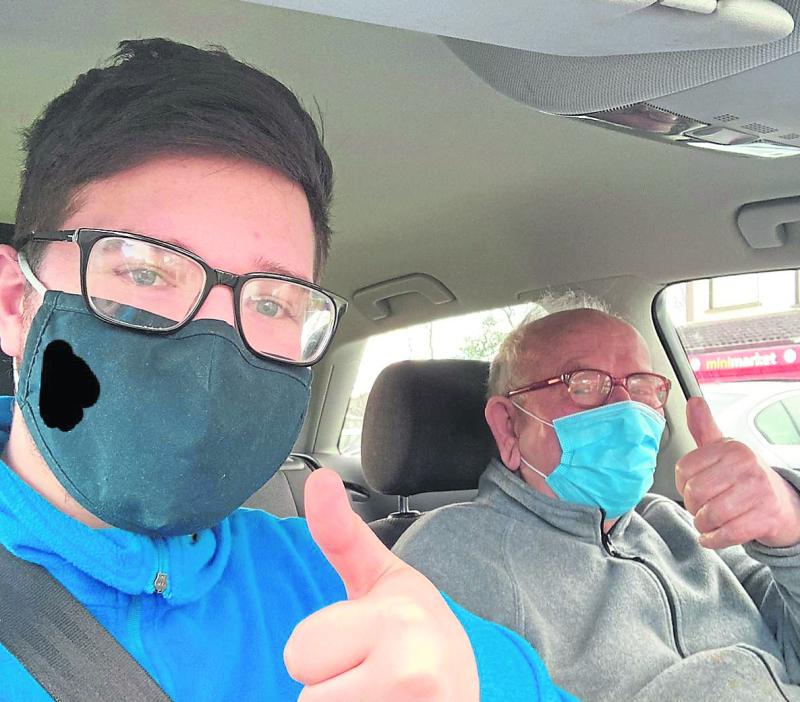 We all love some positive news and the story of Longford town’s Connor Reid which gained lots of national attention certainly brought a smile to all our faces at a time when there is much Covid-19 gloom around the place.

When his mam, Emma, tweeted on Thursday, about her 23-year-old son Connor helping their 86-year-old neighbour, Paddy Jordan, since last March and that Connor was bringing Paddy for his first vaccination jab, little did she realise the traction her post would gain. It achieved almost 6,500 likes, 161 retweets and 156 replies.

So what started ‘as a proud mam moment tweet’ spiralled into a positive news story and Connor explained, “My mam initially sat me down and said sorry to me.

“I’m not really into social media and I had come home from working nights and she told me her tweet had got 22 likes and that I ‘was famous’. I knew nothing about it. I have a twitter account alright but that is just to follow the football results!”

Then the retweets and messages increased in number. “I was completely taken aback by the response because helping out Paddy isn’t a task,” outlined Connor. “It is very easy to call next door and check on a neighbour and see how they are doing. It is easy to be kind.”

Twitter sensation Connor, who is studying Quality & Lean Management part-time at college and also works at a local pharmaceutical company, was subsequently contacted by a number of media outlets wishing to speak with him about his acts of kindness and assistance to Paddy since Covid-19 hit these shores almost a year ago.

He guested on TodayFM with Mairead Ronan and she and her listeners hailed Connor as a credit to himself and his proud mam for his good deeds.

Connor said it was all ‘a bit mad’ and he thanked local firm Belton Engineering who, upon hearing his interview, presented him with a gift voucher from Spirit Clothing.

“It was a lovely gesture, unexpected, but much appreciated and I’d like to thank Gavin Belton.”

Connor pointed out that Paddy is due to receive his second vaccination on March 25.

He remarked, “It started a year ago, getting his groceries and generally helping out. Our families have been neighbours for many years and I was just checking in to see if Paddy needed anything.

“Paddy knows everyone around Longford town and has plenty of brilliant stories from yesteryears to tell. He is big into greyhounds and unfortunately the local track has closed. He was delighted to get his vaccination and like us all he is looking forward to meeting up with friends, hopefully, in the near future.”

Connor is still not quite sure what to make of his new found fame and at a time when we are being bombarded by bad news, his kindness is an example to us all and best wishes to him and Paddy.

Stay safe everyone and be kind!