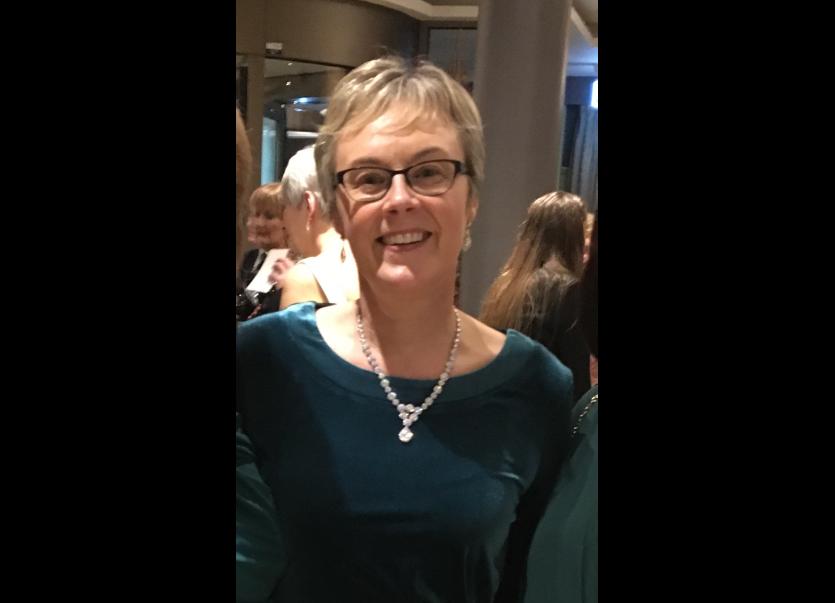 Ballymahon’s Shirley Maloney is only the second female in the history of the Community Games organisation to hold the position of National Secretary.

Married to John, they have two sons David and Philip, and she will be at her workplace on International Women’s Day. “I will be celebrating it with the rest of my colleagues - usually we bring in some treats to the staff room to mark it.”

Shirley pointed out that presently, over 50% of the Community Games Board of Directors are female. “It is important to me that the female voice is heard and respected in the workplace and also at all levels of sporting organisations.”

I will be at work so I will be celebrating it with the rest of my colleagues- usually we bring in some treats to the staff room to mark it.

It’s a day to reflect on improvements made for women’s rights and an opportunity to discuss further improvements and to celebrate wonderful women and diversity throughout the world.

In my own life I choose to stand up for female rights and gender diversity. We can all choose to challenge and call out gender bias and inequality. We can all choose to seek out and celebrate women's achievements and we can all help create an inclusive world. In the workplace and in the community games organisation I volunteer in, it is important to me that the female voice is heard and respected in the workplace and also at all levels of sporting organisations and NGBs. At the present time over 50% of the Community Games Board of Directors are female.

According to the World Economic Forum, gender parity will not be attained for almost a century. Do you agree? Could it be attained sooner? Have you ever suffered at the hands of or know of a family member or friend that has suffered due gender bias?

I wouldn’t necessarily agree with that. I feel that with the right momentum and focus politically we could achieve this much sooner. It is now widely accepted that gender parity in education and employment is critical, highlighting the need for collaborative action across different scales. We need to encourage more females to come forward into political life and ensure that they all have access to education.

I am lucky enough not to have suffered gender bias but I have a female friend who experienced this in her workplace in the private sector. She discovered after working several months that she was being paid substantially less in wages than male colleagues in the same position in the company.

When I think of inspirational women, I do not think immediately about those who have achieved success in a leadership role instead I think of the women who have taught me about respect, compassion, honesty and integrity.

The first lady I think of is my Mum who taught me never to be afraid, be honest, to always believe in and do the right thing and to respect all people and in turn you will be respected.

The second lady I think of is Catherine Corless whose revelations about the deaths and burials of hundreds of children on the former Mother and Baby home site in Tuam, Co Galway, led to establishment of the commission and the report into several Mother and baby homes in this country. An historian she was fearless and determined to get to the truth of a very dark period of time in our history.

How many years are you involved in and roles in Community Games?

Community Games achievements / or achievers you are proudest of ?

Community Games achievements I am most proud of is my own local area Ballymahon/Forgney winning the National Overall Area Award for two years in a row 2015 and 2016, Overall Leinster Area Award and Gold Steps to Health Award for four years in a row 2015 to 2019.  I am also very proud and honoured to have been elected as National Community Games Secretary and only the second female to hold this position in its 50 year existence.

It has also been wonderful to witness the progression of Darragh Greene and Cian McPhillips who were former participants in Longford Community Games and are now at the top level of sport representing Ireland in swimming and athletics.

Covid-19 pandemic - how has it affected the Community Games organisation and how are you and your family coping?

When Covid 19 pandemic arrived and the first lockdown occurred the organisation had just held its AGM. When the true extent of the pandemic  became clear, National Community Games decided to advise counties and areas not to hold any events for the remainder of 2020. We moved some of our events online, for example, art. This was extremely successful and we had a lot of engagement from participants and counties on this and continued to do this for the rest of 2020.

Like all other families lockdown has been challenging and especially not being able to see family and friends. We are doing lots of walking and keeping busy with work and online zoom meetings!  It's great to see the roll out of the vaccine taking place and we are looking forward to the summer and hopefully better days ahead.

Plans for when lockdown restrictions are lifted - Community Games and on a personal level ?

In Community Games at National Level we have been working away with a plan for 2021. At the moment areas and counties are starting the process of affiliation. In May, which would normally be Weekend 1 of the National Festival competition, some of our events, for example, art, model making, handwriting will be held online. Competitions for outdoor activities and events are planned to take place later in the year with hopefully at that stage the vaccine rolled out and restrictions lifted.

On a personal level I am looking forward to seeing all my family and friends again. Enjoying a cup of coffee and good catch up which is what I have most missed.

And a little curve ball…
How would  you rate the performance of Government in their handling of the Covid-19 pandemic? Are you satisfied with how they have communicated their message?

Overall I would not be satisfied with the way they are communicating their message - they have different members of Government sending out mixed messages and causing confusion rather than just one voice. I can understand that it has been difficult for them handling the Covid 19 pandemic and a lot has been learned about it over the past year but I think that if we all stick together the vaccine is only around the corner and hopefully by the end of the year we will all be in a much better place.