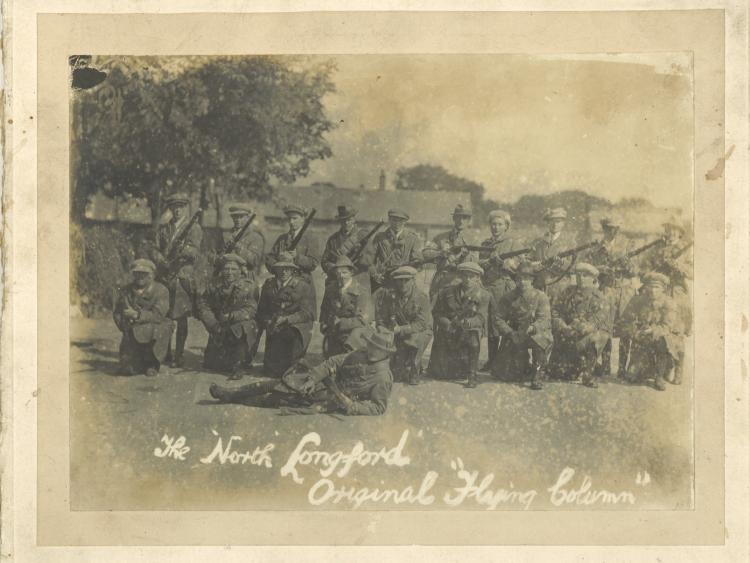 Seán Ó Súilleabháin, renowned local author and historian, has been researching Longford’s part in the War of Independence for the past four years, for a book which he hopes to publish later this year. 2020 & 2021 marks the 100th anniversary of some key events in the War of Independence. Indeed, 1920 and 1921 were momentous years in Longford’s history and the deeds of Seán Mac Eoin and his Flying Column were legendary. We are delighted that Seán Ó Súilleabháin is sharing some of his research with Longford Leader readers as he looks back on that era, and this week he looks at the Clonfin Ambush of February 2, 1921, when the elite British forces surrendered to Seán Mac Eoin. The author would welcome any feedback or comments at sosuilleabhain9@gmail.com

In 1921, Longford was the second smallest of the 32 counties, in population. Carlow filled the bottom place. How extraordinary it was then that Longford was regarded as one of the top counties in terms of leading the fight against British occupation forces.

Marie Coleman in her book, County Longford and the Irish Revolution, 1910 – 1923, said;
“Longford was one of the most important theatres of the Irish revolution ……During the War of Independence it was the only significant area of IRA activity outside of Munster.”

Throughout 1920, the IRA in Longford carried out numerous attacks on RIC barracks. Their best outcomes were achieved in Ballymahon and Arva where both garrisons surrendered and quantities of arms and ammunition were handed over to the IRA. Towards the end of 1920, the revenge tactics of the Black and Tans and Auxiliaries resulted in the burning of Granard and Ballinalee and these events had a profound impact on the IRA and the general population.

North Longford Flying Column
Seán Mac Eoin was continuously plotting and planning for a spectacular operation that would reinvigorate the movement and throw the enemy forces into disarray again. On Wednesday, February 2, Mac Eoin and his Flying Column seized the opportunity to reassert their position as one of the leading active service units in the country.

In November 1920, Seán Mac Eoin had gathered together over twenty of his best soldiers to form a full-time flying column. These men were on-the-run for most of the time, staying in safe houses and developing mines and bombs for use in ambushes. Opportunities for attacks on military convoys were also being explored and it was Michael Mulligan from Willsbrook who first suggested Clonfin as a suitable location for an attack on one of the contingents of Tans and British forces that moved regularly between Ballinalee and Longford. Seán Mac Eoin and Seán Duffy picked the ambush positions a day or two before the event. The mine was constructed in Feeney’s of Ballymore and transported in a wheelbarrow the night before the ambush.

Scene is set for Ambush on Wednesday, February 2
Early on that fateful morning, twenty-one men congregated in Burke’s and Higgins’s in nearby Killeen and awaited instruction from their leader, Seán Mac Eoin. Information to hand indicated that a force of RIC/Tans would be travelling from Granard towards Ballinalee at some time during the day and they would be halted by a land mine strategically buried in the roadway and this would be followed by all-out assault from attacking groups located in the surrounding fields.

The basic plan was to place men at four outposts, two on the left-hand side of the ambush position and two on the right. The main attacking group of nine men were positioned in a fort overlooking the road, on the left side. The mine was set in the roadway, well before dawn, and Paddy Callaghan brought the detonating wire to a position where he and two others would be located. Theirs was the most vulnerable position of all and the closest to the ambush site.

There was an expectation that the British might arrive any time after 11am but the hours passed and no sign of them. Tea and refreshments were provided from nearby households, and around 3pm the sound of lorries could be heard in the distance. All IRA eyes were focused on the position near the bridge where the mine was buried, as two lorries carrying nineteen Auxiliaries approached.

Paddy Callaghan detonated the mine with perfect timing and the first lorry was blown into the air, with the occupants thrown out of the vehicle. When the second lorry stopped, the occupants disembarked, and the fight began. A Lewis machine gun was quickly brought into action by the British, but the gunner was hit by fire from Jim Sheerin and put out of action. A second Auxie, who attempted to man the gun, met the same fate and so their most powerful weapon was silenced. A fierce battle ensued but the British were seriously exposed, with little cover on a bare roadside in the middle of winter.

The British Surrender
Eventually, the British commander indicated that they wished to surrender and Seán Mac Eoin, accompanied by a couple of others, moved down to the roadway to engage the leader of the British convoy, Francis Worthington Craven.

What a momentous occasion this was as a group of elite British forces surrendered to a similar-sized group of Irishmen, motivated by one thing only, the freedom of their country and an end to British occupation.

Craven enquired of Mac Eoin as to what he intended to do with his comrades, some of whom were already dead and many more were injured.

Mac Eoin famously asked Craven what the outcome would be, if the positions were to be reversed.

“Is it as bad as that?” Craven asked.
“No, it is not”, Mac Eoin replied.
Within minutes, Craven himself breathed his last.

Seán Mac Eoin ordered his men to tend to those who were injured and indicated that he would allow them the use of the undamaged lorry to take away the injured. This was in marked contrast to what the British did in Leitrim a few weeks later when they sought to annihilate a group of the South Leitrim Brigade that included Ballinalee’s Seán Connolly. Six IRA men were killed and only one of those captured survived.

In tending to the wounded, Seán Mac Eoin was almost caught out because, while he and three others were still on the roadway, British reinforcements arrived from the Ballinalee direction. Most of the IRA contingent had already moved towards Bunlahy and the remaining four had to make a hasty retreat while under fire from the new arrivals.

Below: Drawing showing the positions occupied by the 21 IRA men at the Clonfin Ambush (from Teathbha 1971) 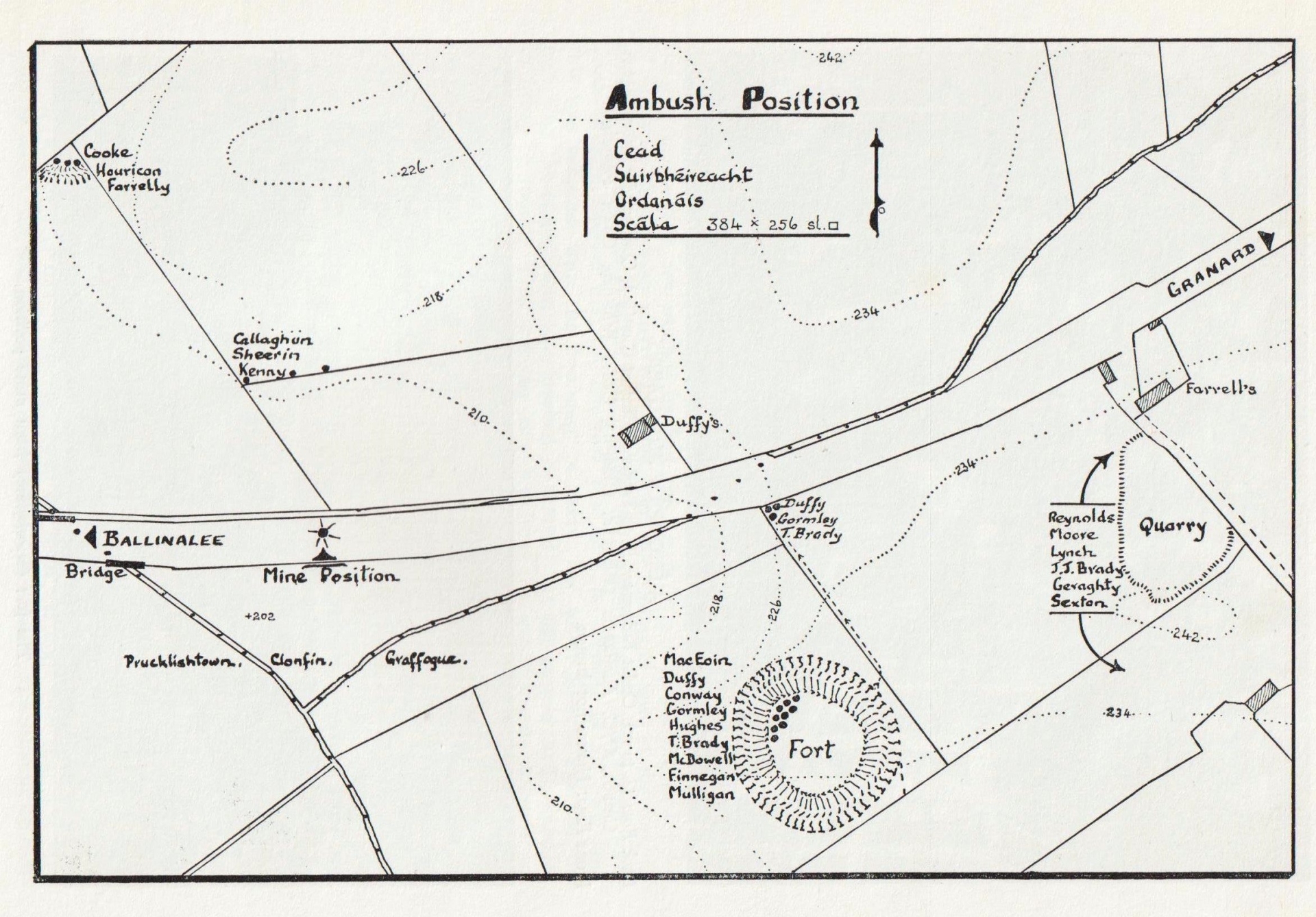 Casualties
Four Auxiliaries died from injuries sustained in the ambush. Two died at the scene, one died later that evening in hospital and a fourth died two days later. Seven of the Auxies never served in the army again, as a result of their injuries. Remarkably, none of the twenty-one IRA men were injured in the battle, although Tom Brady received a superficial wound during his late retreat from the scene.

Retreat from the Battle
At the end of an eventful day, a tired group of IRA men wound their way through the bog, crossing the Camlin River by the wooden footbridge that led them to Bunlahy. Their first stop was in Grier Pettit’s and they then proceeded to Mikie Rogers’s in Aughakilmore, where they got their first proper meal of the day. Some of the local men went to their own homes, while others stayed in safe houses in surrounding townlands in Colmcille.

The Aftermath – Tans Wreak Havoc
Reprisals were expected, in line with what had happened on other occasions in Longford and elsewhere. The Tans were usually blamed for whatever might happen, but the British troops at Clonfin were Auxiliaries. Would that make any difference? No, not a bit.

Early the next morning, troops descended on North Longford and their first call was to the Clonfin area where they took out their wrath on houses close to the ambush site. Here they shot dead an elderly man, Michael Farrell, who lived a few hundred yards away and they even tried to set fire to his house. Tom Duffy’s house was nearest to the ambush position and they tied Tom and his wife to chairs on the street and set their home ablaze.

In Aughnacliffe, they set ablaze the pub and grocery ran at that time by Tom O’Reilly (later Derry Smith’s and now Murtagh’s) and they arrested one of those who worked there, James Donohoe. Paddy Finnegan’s in Molly was the next target. Paddy was in action in Clonfin and was unfortunate to have discarded his damaged rifle at the scene. He had his initials engraved on the rifle and the Tans went straight to his house, ordered his father and mother out, and burned the house.

A Major Victory for the IRA
The Clonfin Ambush was Sean Mac Eoin’s and the Flying Column’s finest hour. It was an outright victory with significant casualties inflicted on the enemy and a considerable amount of guns and ammunition captured. It was achieved without any injuries on the IRA side and with considerable compassion shown to the defeated.

It was a major boost to the morale of both the IRA and the people of North Longford who had seen their towns looted and burned just some months earlier by the dreaded Tans. The engagement with the old enemy was headline news in Ireland and England and in America too, where the progress of the Irish Revolution was being followed closely. Conversely, this was one of the worst experiences yet for the British forces of occupation in Ireland.

The IRA were seen by the vast majority of people in the area as heroes and indeed the event gave momentum and encouragement to the IRA far beyond the confines of County Longford. Seán Mac Eoin’s personal standing rocketed as a result of this well-planned and perfectly executed ambush.

‘Ballinamuck RIC Barracks attack – one of the most daring operations during the War of Independence’ ;

‘The Burning of Granard by the Tans and Lancers, and legendary defence of Ballinalee by the IRA’

The following are the twenty-one men who took part in the Clonfin Ambush with their home townland and age at the time of the event.

Below: Aerial view of Clonfin Ambush site with fort clearly visible in top left of picture 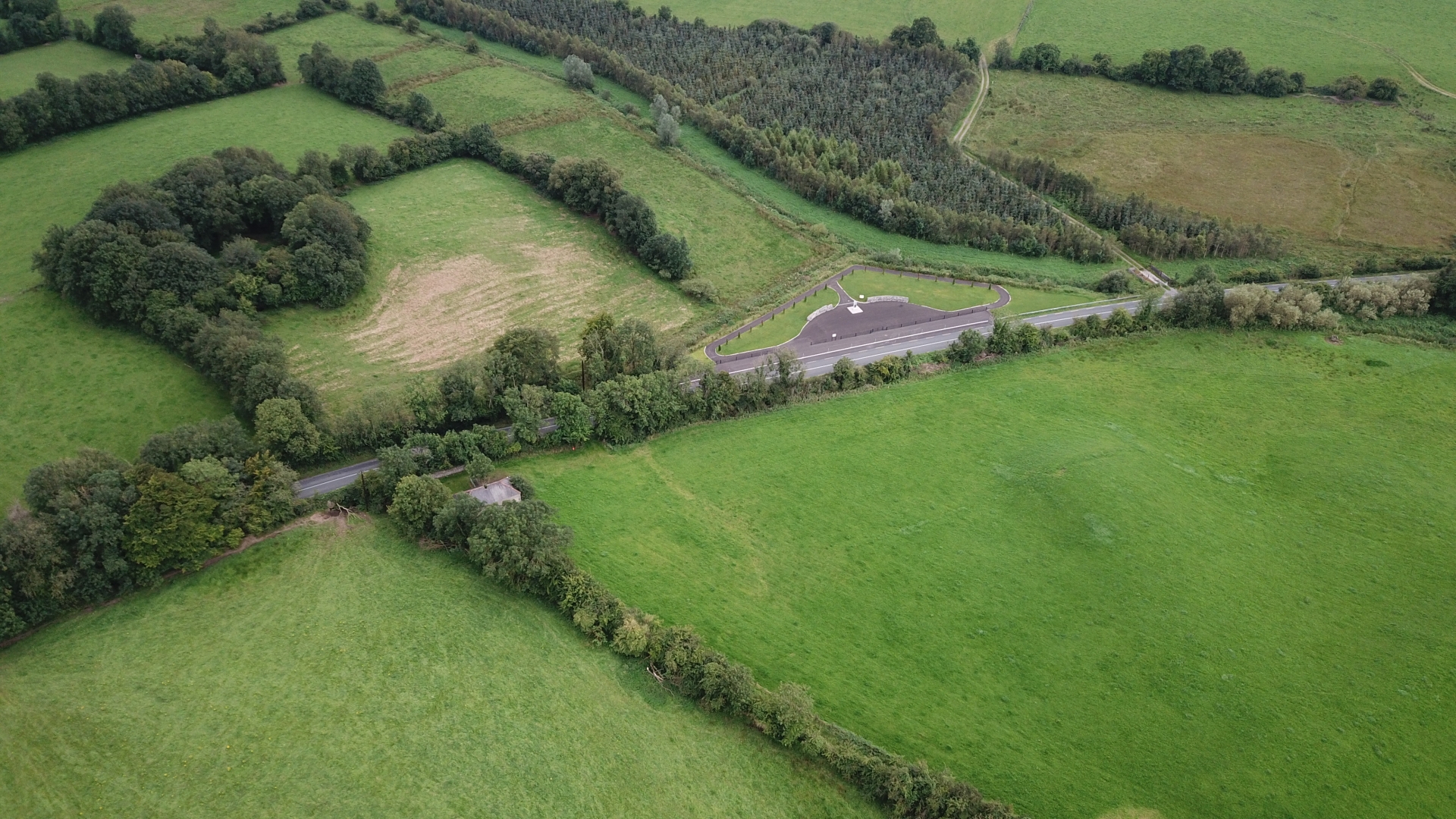