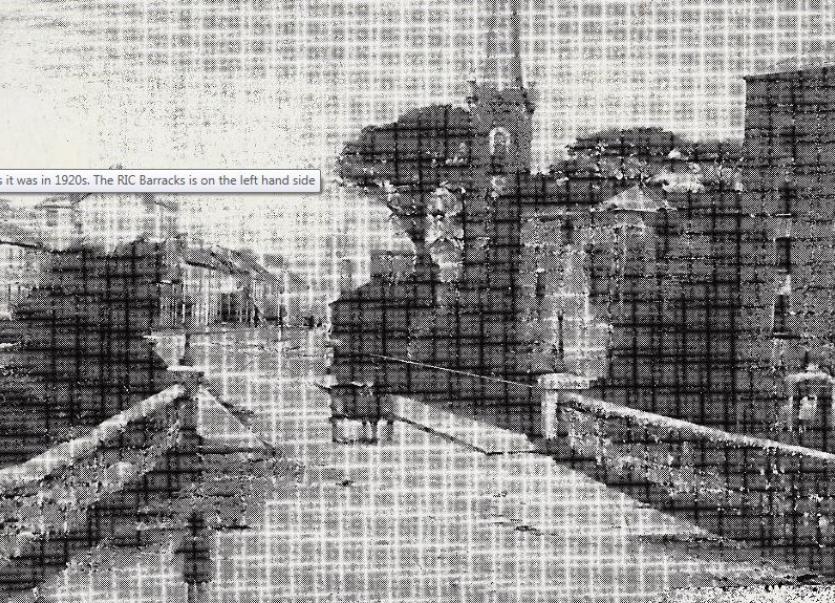 Inny Bridge, Ballymahon as it was in 1920s. The RIC Barracks is on the left hand side

Wednesday next, August 19, 2020 will mark the 100th anniversary of the first major War of Independence engagement to take place in South Longford.

Up to that point, North Longford had gained a national reputation as a hot-spot of resistance to British rule, while little of significance had taken place in the south of the county.

Seán Connolly and Seán Mac Eoin had led the assaults on Drumlish and Ballinamuck Barracks but, while both operations had led to the closure of those barracks, no arms or ammunition were captured on either occasion. Any further plans were being hindered by the meagre supply of arms.

Seán Mac Eoin then mounted one of the most daring operations of all, when he and five others carried out a raid on the Upper Military Barracks in Longford (where Pearse Park is now). The raid took place on August 18 and yielded 11 rifles, 550 rounds of ammunition, grenades and other equipment.

An attack on Ballymahon had been mooted for some time, but had been shelved because of a lack of arms. The success of the raid on Longford Barracks cleared the way for it to proceed.

Not a man to rest on his laurels, Seán Mac Eoin met Seán Connolly the very night of his successful raid in Longford and finalised arrangements for an assault on Ballymahon to take place the following night.

The Inny-side town had been selected, with two objectives in mind. The first was to instruct the IRA in the South of the county on how to mount such an attack and the second reason was to take the heat off the IRA in North Longford.

Despite the relative lack of activity, there was a strong core of active IRA members in South Longford and they had watched, enviously, at the successes of their North Longford colleagues. The Ballymahon operation was planned as a learning experience for members of the 3rd and 4th battalions and a successful attack might also add further to the stock of weapons and ammunition of the Longford Brigade.

Ballymahon Barracks was located on the Main Street and was manned by 15-20 RIC/Tans at any one time. The building had been fitted with what were known as Very lights and these could be fired into the sky to alert British forces in Athlone, Mullingar or Longford, if assistance was required. This meant that hundreds of reinforcements could be on the scene within thirty to forty minutes. It was a particularly risky operation for the IRA, and needed to be completed in quick time.

Seán Mac Eoin claimed that the responsibility for the capture of Ballymahon Barracks was placed on him, although Seán Connolly was also present and took a key role in its delivery. Mac Eoin brought with him some of his most experienced men, about ten in all, many of whom would figure in the North Longford Flying Column later in the year.

Two cars driven by Frank Davis and Paddy McKenna from Ballinamuck ferried the North Longford men until they stopped about a mile from the village of Barry. There, Mac Eoin and Connolly presented eight men with rifles and ammunition. Frank Davis recalled that Mac Eoin addressed the men who were selected, telling them:

“The arms he was handing over to them were in the possession of the British Army twenty-four hours previously. He said that he expected them to use them now in a manner befitting themselves as soldiers of Ireland.”

The cars were driven, without lights, for the last few miles and parked in the grounds of the Catholic Church, where Paddy McKenna kept an eye on them.

The majority of the men called into action were from the local IRA companies around Ballymahon, Ardagh, Carrickedmond, Kenagh and Legan.

This operation involved large numbers, with about 50 deployed at four locations in the town itself. Some were located at the bridge near the Athlone Road junction, others were at the Church of Ireland and the core group were based on the street and at the end of the barracks itself.

In addition, there were outposts at crossroads in a broad area surrounding the town, at Ledwithstown, Foigha, Goshen, Bawn, Doory, Moigh, Tang, Forgney, Abbeyderg and elsewhere.

At those locations, trees were felled and roads cut to prevent enemy forces from getting through.

As the main group of men were crossing fields to approach the barracks from the rear, they could hear the reassuring sound of trees falling in all directions. At least 40 more men were engaged at these outposts.

Cumann na mBan members had first aid stations, with the nearest one in Baxter’s in Ardagh. There, a group of women including Mary Ellen Baxter (Killinlastra), Kate Egan (Treel), Julia Ballesty (Lisdreenagh), Mary Donnellan (Croshea) and Marcella Donnelly (Kinard) were prepared for the worst and they also had food ready for some of the returning IRA men.
At 10pm, as the night sky closed in, the core group of IRA men assembled near the Moigh/Castlecore crossroads.

Michael Joseph Ryan from Lanesboro, who owned a lorry, brought most of the equipment in advance from Ballinalee to Pat Campbell’s house at Lislom, Kenagh. Campbell brought the goods on an ass and cart, covered with straw, as far as this crossroads.

Delicate Approach to Rear of Barracks

At midnight, the delicate approach began as the raiding party took to the fields through the “Black Gate” at Moigh and set off silently in twos, cross country for Ballymahon. Pat Steele acted as guide and Michael Malone, Cartronboy, carried a bag of Mills bombs.

At this stage, about twenty of the IRA men were equipped with rifles and more had shotguns or pistols. As they approached the barracks, Seán Connolly warned the men that they were on a dangerous mission and suggested that each of them should make an Act of Contrition.

When the various groups had taken up their positions on the street, and in front of the barracks, fire was directed at the windows and doors to prevent anyone exiting. The difficult task of breaking into the barracks was given to eight men who approached it from the attached dwelling houses.

Firstly, they gained entry to Donohoe’s saddler’s shop, two doors to the right of the barracks, and then they broke through the wall to the next house which was occupied by the Lloyd family. This had to be achieved by cutting a hole through the wall on the ground floor with very rudimentary equipment, as described by Leo Baxter:

“The only tools we had for this purpose was a crane hook, and we used a sledge to drive this between the stones in the wall at the back of the fireplace. The working party consisted of Connolly, Brian Partridge of Ardagh and myself.”

When the wall into Lloyd’s was breached, the IRA men found the Lloyd family, as well as the wives of two RUC men, huddled together in an upstairs room. All were taken through the hole in the wall to the safety of a neighbouring house.

The next stage in a difficult task was to gain access to the roof of the barracks and this was done by breaking through the ceiling and roof of Lloyd’s. Leo Baxter, the tallest man among them, broke through the ceiling with an axe and, in similar fashion, made a hole in the roof.

Seán Connolly then crawled through the opening in Lloyd’s roof and proceeded to break a hole in the roof of the barracks. He called on the RIC to surrender, but they refused.

Connolly then lit the fuse and threw a 7lb cartbox bomb through the hole in the roof, blowing away the ceiling and floor underneath. The RIC had retreated to the other side of the building but, when called upon, they still refused to surrender.

The IRA, who had been experimenting with new types of bombs during the summer, had created a new piece of equipment, not used before, which they called “Big Bess”. This bomb contained sulphur, brimstone, black pepper and other ingredients.

When the bomb was thrown through the hole in the roof, it fell down to the ground floor and exploded, sending gas fumes all over the barracks. While the bomb may have smelled more dangerous than it was, the result was instant surrender by the RIC.

It must have been an extraordinary sight, and an occasion of great satisfaction for Seán Mac Eoin and his loyal followers, to see RIC men emerge from the building, lay down their arms and line up, under IRA orders. They were then marched to a house on the Athlone Road and locked in.

A decision was made not to burn the barracks, because of risk to adjacent dwellings.

Major Success for the IRA

The Ballymahon operation was a very significant step in the War of Independence in County Longford. This was the very first occasion the IRA in the county had obtained a surrender and a hand-over of equipment in a barracks attack, and it was achieved without any casualties on either side.

About ten rifles and five or six hundred rounds of ammunition were handed over, as well as some revolvers. There was some disappointment among the local IRA companies, because most of the haul was loaded into the two cars which had brought the North Longford men to Ballymahon.

However, the involvement of South Longford IRA men did spur them on to taking a more active part in engagements and eventually a South Longford Flying Column emerged.

While there were many more engagements with British forces in South Longford over the next eleven months, the surrender of Ballymahon Barracks by the RIC/Tans on the morning of August 20, 1920 was the outstanding event from the War of Independence in South Longford.

Seán Mac Eoin was involved in many memorable and successful operations, but nothing, apart from the Clonfin Ambush, could compare with the two successive nights of Tuesday and Wednesday, August 18 & 19, 1920.

The daring raid on Longford Military Barracks on the Tuesday produced eleven rifles, and the surrender of Ballymahon on the Wednesday yielded another ten rifles.

Morale was at an all-time high among the IRA in Longford on that August morning as men returned to their homes, both North and South.