The War of Independence in Longford 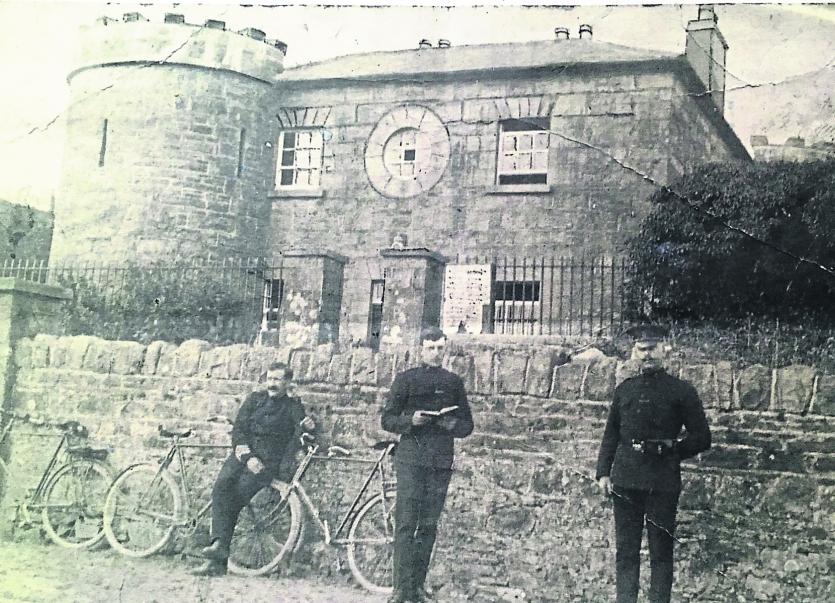 Ballinamuck RIC Barracks as it was in 1920, with turrets on two corners

Seán Ó Súilleabháin, renowned local author and historian, has been researching Longford’s part in the War of Independence for the past four years, for a book which he hopes to publish next year. This year marks the 100th anniversary of some key events in the War of Independence. Indeed, 1920 and 1921 were momentous years in Longford’s history and the deeds of Seán Mac Eoin and his Flying Column were legendary. We are delighted that Seán Ó Súilleabháin will share some of his research with Longford Leader readers over the next number of months as he looks back on that era, beginning this week with the attack on Ballinamuck RIC Barracks which took place on June 19, 1920

Friday next, 19 June 2020, will mark the 100th anniversary of one of the biggest and most daring operations carried out by Longford IRA during the War of Independence.

More than 100 IRA volunteers from the surrounding parishes were mobilised and headed for Ballinamuck on that bright summer’s evening.

Five months earlier, the IRA had carried out their first major operation in the county when they staged an attack on Drumlish RIC Barracks on 5 January 1920.

The objective was to force the RIC to surrender and to take their guns and ammunition for use in further engagements with British forces.

From an IRA perspective, the Drumlish operation wasn’t a success, due mainly to the failure of a number of bombs to explode.

It transpired that the gelignite was damp, or “frozen”, and this caused the problem. The only positive the IRA could take from it was that the RIC abandoned the building within days and the IRA burned it to the ground.

Over the next few months, a number of engagements were planned by the IRA, but were aborted for different reasons. A major assault was arranged for Edgeworthstown Barracks in early June but, when everything was in place, a report was received that large numbers of enemy troops were moving out of the Upper Military Barracks in Longford and were heading out the Dublin Road.

After some discussion, it was thought best to call off the attack. A planned ambush of British troops at Ballinascraw, on the Granard to Ballinalee road, also fell through when the Crown forces took a different route, at the last minute.

Nevertheless, the RIC were being put under serious pressure and they abandoned nearly all of the rural barracks in early 1920. No sooner had they left the buildings than the IRA burned them, to prevent their being reoccupied. Barracks set ablaze included; Larkfield, Smear, Ballinalee, Newtownforbes, Killashee, Lisryan, Abbeyshrule, Ballina (Cashel) and Kenagh.

Five months were to pass before the IRA would again engage in serious combat with British forces and that operation was an assault on Ballinamuck RIC Barracks on June 19, 1920.

At this stage, Seán Connolly and Seán Mac Eoin were the two leading lights in the IRA in the North of the county, however, Connolly was the man in charge and it was he who planned the attack on Ballinamuck, one of the most heavily fortified barracks in the county.

If they were to succeed in taking this barracks, it would be a major victory for the IRA.

Connolly first consulted with Frank Davis, a leading member of the IRA who lived in Shanmullagh, very close to the barracks.

Davis and Connolly spent two nights sussing out the building, its location and lay-out. Davis thought it was a dangerous and high-risk venture, describing the building as “a regular fortress”:

On two corners of the building there were turrets, with look-out slots giving a view in all directions. (These can be seen in the accompanying photograph) It was understood that, after 10.00pm each evening, one policeman was located in each of the turrets, on lookout duties.

Seán Connolly was a fearless operator who saw possibilities where others saw nothing but risks. He had observed that the ball alley obscured the view from one of the turrets and he figured he could get up close to the roof, from a ladder placed in the ball alley.

The barracks had two A-shaped roofs with a valley between them and the plan was to set the roof alight by throwing a cartwheel box bomb across a parapet into the valley, followed by bottles of petrol and then another bomb. Once the decision was made, the IRA started to plan for an attack on 19 June 1920.

The IRA were determined to do everything to ensure that this operation would be successful and, while arms were in short supply, there was no shortage of men, able and willing to lend a hand. Somewhere in the region of 100 men were called into action but, apart from a select few, nobody knew where they were going, or what they were going to do.

Shortage of arms was a problem and, amazingly, there were only six rifles available, plus a number of shotguns and revolvers. There were about fifteen RIC men in the barracks, with any amount of rifles and ammunition at their disposal.

The assembly point was at Bandra and there the various teams were selected, each with its own commanding officer.

There were nine outposts in all, each having about ten men. Many of those involved were unarmed, partly because there weren’t enough guns to go around, but also because some had duties like felling trees or cutting trenches in roads, to block access or exit to enemy troops.

Interestingly, Seán Mac Eoin, who took charge in most of the other attacks on barracks, was located at Gaigue Cross with the task of preventing reinforcements arriving from that direction. The key group were the eight men chosen to go with Seán Connolly to the ball alley area.

When the men assembled at Bandra, news was received that lorries of British army personnel had arrived in Drumlish and Frank Davis was instructed to cycle to the town to see if this was true. Davis returned to confirm that four lorries were parked beside the temporary barracks there.

Connolly and Mac Eoin discussed the situation and, recalling how they had aborted the Edgeworthstown operation unnecessarily, they decided to take the risk in Ballinamuck. It was then getting late, and being near midsummer’s night, the hours of darkness would be limited.

With all outposts in place, and roads blocked, Connolly and his small band of eight brave men took on the risk of their lives.

They had to move with extreme caution, carrying the bombs and cans of petrol, while out of view of the turrets. Even a dog barking could scuttle the whole operation, and put lives at risk as well.

Seán Connolly told Mac Eoin afterwards that he never found anything as scary as the last two hundred yards.

If an RIC man spotted them and chanced to hit one of the bombs, the result would be serious. Michael Francis Reynolds from Corlea, Killoe, described the delicate operation Connolly undertook:

“Connolly got on to the top of the ball alley wall, and from there he hurled the bombs on to the roof. He had men underneath him handing up the bombs and petrol containers to him in “chain bucket” fashion. I was in charge of the rifle men at the corner of the graveyard. Our job was to cover off Connolly and to control the entrance to the barracks. We fired very little as there were no targets to fire at.”

While this operation was in progress, another group of men, positioned at the church, directed fire at the barracks as soon as Connolly and his men arrived safely at the ball alley. This was intended to distract the attention of the RIC and to ensure they didn’t emerge from the building.

Connolly carried out his task efficiently and, within minutes, the whole building was ablaze. The occupants quickly evacuated the barracks and retreated to out offices in a backyard.

This ensured their safety, but it also reduced the possibility of the IRA obtaining a surrender and capturing arms. The front windows were barricaded and it wasn’t possible to gain entry, with the building in flames. However, it was said afterwards that the RIC were on the point of surrender when the IRA retreated.

While they failed to capture any arms or force the RIC to surrender, the IRA leaders were reasonably satisfied that the operation had gone ahead without a hitch and the gelignite worked on this occasion.

This was the first occasion the IRA in Longford had successfully detonated a bomb in an active combat situation and the barracks was completely destroyed. It was evacuated the following day. There were no casualties on either side.

Who were the Leaders?

The men in charge of the nine posts were as follows;

The operation was carried out by men from the 1st and 5th battalion.

The majority of the men were from the Drumlish/Ballinamuck area. The exact numbers involved in the Ballinamuck attack is uncertain. Frank Davis estimated that between eighty and one hundred men were involved.

The Brigade Activity Report of the Ballinamuck operation in the Bureau of Military History, compiled in the late 1930s, lists about 160 men and 30 women, said to have been mobilised on the night of the event. It seems likely that, at maximum, close on 100 men were involved.

Cumann na mBan members were very often engaged in carrying arms and equipment to the site of a proposed IRA operation.

We cannot be sure if this was the case in Ballinamuck, but the Brigade Activity Report suggests that there were four Cumann na mBan posts in operation on the night of the attack.

The purpose of these would be two-fold; first aid in the case of casualties and as food stations for IRA men on their way home.

The locations of these posts are given as: