Engage: Light installation harks back to the Spanish Flu pandemic of a century ago 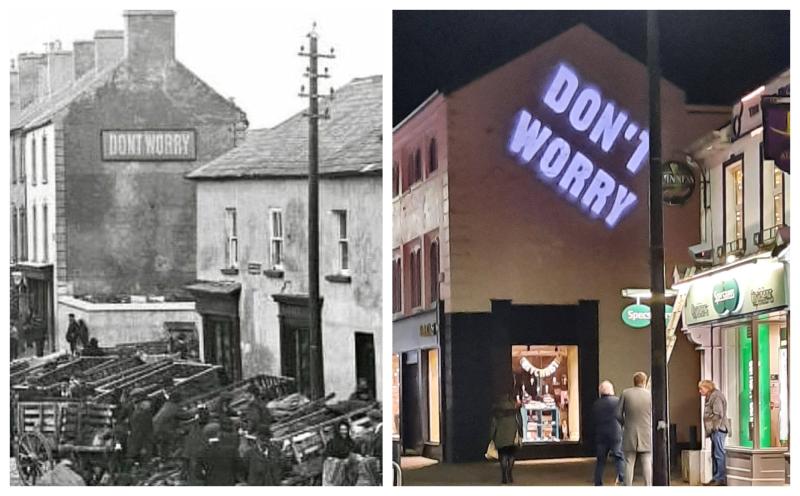 As the country faces into an extension of the current Level 5 lockdown, it’s important to find hope and positivity in the little things around us. That’s the message local voluntary art group, Engage, has put out there with a new light installation on the gable of the Durkin’s building in Longford town.

Local graphic designer Rosie O’Hara came up with the idea when she spotted an old photograph posted on a local Facebook page, Out and About in Longford Town, showing a sign that read ‘don’t worry’ on the side of a building in the town between 1918 and 1920 when the country was gripped by the Spanish Flu pandemic.

The sign back then aimed to encourage people to stay positive and to remind them that brighter days are one the way. A century later, the people at Engage share that same sentiment with the new light installation.

“I saw the original picture when it was posted on Out and About in Longford Facebook page and thought it was a simple but powerful message to convey solidarity and hope and it would be nice to recreate it as a ghost image or nightlight on the gable to bring a message of encouragement from the past into the present,” Rosie explained.

“Claire from Durkin’s and Satishe from Aubergine Nua were also taken with the idea, then Caroline from Grey Wizard Design and Gerry Conboy from Echo Sound and Light helped with tech to put the image in place.”

The photographs of the installation were posted on the Engage Facebook page on Monday, January 18, known as ‘Blue Monday’, and within days, it was shared over 200 times.

The initial Facebook post stated that the 1918 sign was also on the gable of Durkin’s but, on further inspection, Rosie explained, it was discovered that the original sign pictured is actually on the gable of the Main Street building which, in recent years, was Xtravision.

“The old photo is taken from Specsavers looking down towards Main Street, so the gable in that picture is the former Xtravision building,” said Rosie, but she was quick to add that Durkin’s was also sporting the message of encouragement during the Spanish Flu pandemic.

“There was also a sign on Durkin’s gable at the time and they were sponsored by Stafford’s Hotel on lower Main Street, where Cooney’s Menswear shop used to be,” she added.

This particular project is the first art installation produced by Engage in 2021 and was funded by Creative Ireland Longford.

Engage is an artist led voluntary group, which runs Garvey’s Yard Art Studios in the town centre and produce regular works of art around the town.

The group has put out a special word of thanks to Durkin’s Longford for allowing them to use the wall. They have also thanked Aubergine Nua for providing power for the projector, Grey Wizard Design for the artwork, and Gerry Conboy of Echo Sound & Light AV for the installation.

The installation will once again remdind the people of Longford not to worry; brighter days are coming. We got through the Spanish Flu. We can get through Covid-19.