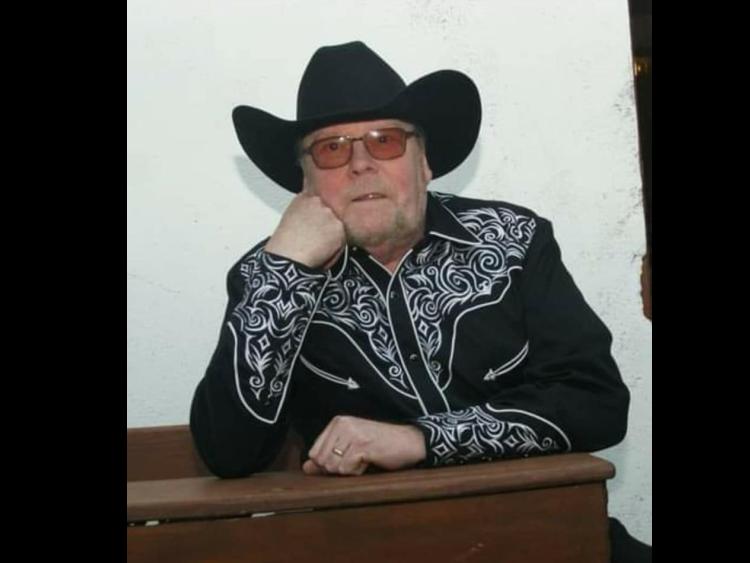 The world of country music is united in grief following news of the death of the legendary Chuck Owens.

Chuck (John) Owens, Rathcronan, Granard, Longford, died peacefully at home, yesterday, Saturday, December 19, and many of the leading lights in the country music industry have been paying tribute to a man they regard ‘as one of the finest country singers Ireland produced’.

Declan added, “Chuck was a fantastic musician, respected and admired by all who played and sung country music in all parts of these isles. Condolences to June, Jonathan, his wider circle of family and friends in Granard of which he was very proud.”

Expressing his sympathy with the Owens Family, Robert Mizzell, commented, “It’s a sad evening when another legendary voice of country passes on! I’m very sorry to hear the news of Chuck Owens passing. Heaven has another country boy tonight.”

Michael Cronin of Cronin, said it was ‘a sad day for Longford with the passing of Chuck Owens’. “Chuck was one of the finest country singers Ireland produced. Thoughts are with his wife June and son Jonathan and family.”

Louise Morrissey described Chuck as a ‘country great’, revealing that Chuck played on and produced her first album ‘Louise’, which included ‘Tipperary On My Mind’.

Ray Reilly posted on Facebook that he was ‘gutted to hear the sad news of the death of an old friend, the great Chuck Owens’. He said Chuck was one of the best country singers he ever heard and ‘certainly one that didn’t get the recognition he deserved’.

Phoenix Country Radio posted on their Facebook page that ‘when it comes to real country this guy didn’t know how good he was and he sadly passed away on Saturday. Would like to offer my condolences to his wife June and his son Jonathan and the family circle RIP Chuck’.

On the RIP.ie condolence book, Ballinamuck’s David Cassidy said the late Chuck Owens was ‘a supremely gifted singer and guitarist’.

He continued, “I had the pleasure of meeting him many times over the years. A nice guy, a real character, a top performer and he has left his mark. He’ll be remembered for many years to come.”

Gerry Costello from Galway hailed Chuck as a brilliant  singer and musician. He added, “We have lost a great Irish artist and a gentle and talented soul. His name deserves to be at the top of the list of the greatest Irish country artists. May he rest in peace. Chuck, we will remember you always. Rest easy my friend.”

Funeral cortege will leave Chuck’s home at 11.45 am on route to St Mary’s Church for anybody who wishes to stand along the route as a mark of respect.

Due to the current H.S.E. and Government Covid-19 guidelines, the house will be private, please. The funeral Mass will be limited to 25 people. The family thank you for your cooperation at this sad time.

For those who would have liked to attend but can’t due to the restrictions, please leave a message for the family in the condolence section on RIP.ie.