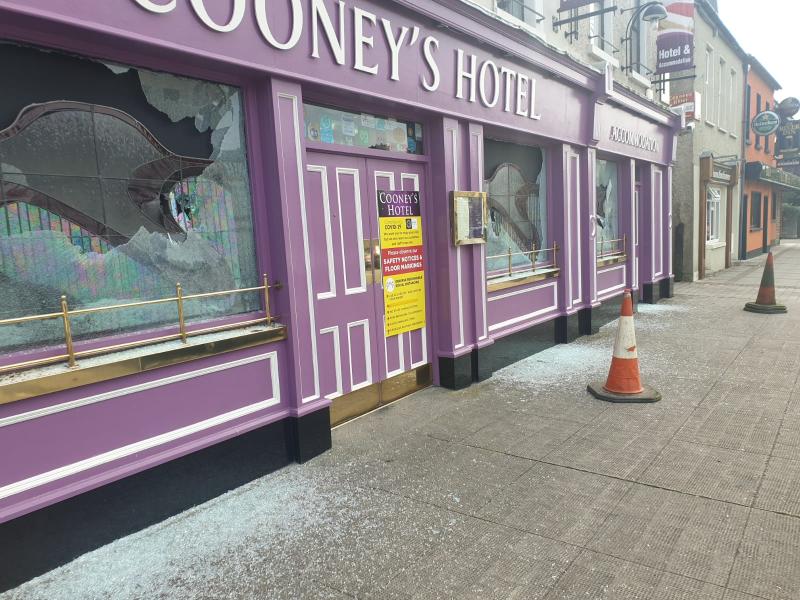 The owner of a Co Longford hotel has said he has been left "utterly devastated" by overnight vandalism which caused tens of thousands of euros worth of damage to his premises.

In an interview with the Leader this morning, Mike Cooney told of his anguish at receiving a call late last night to say three bespoke, hand crafted windows had been smashed in at his family run hotel in Ballymahon.

"My wife and son had only just got in the door and we were sitting down having a chat when we got the call," said Mr Cooney.

It's believed a rock or stone was thrown at the windows at around 11:40pm last night, just minutes after the hotel had been locked up for the night.

The damaged windows have been in situ at the long established business since its opening 14 years ago and, according to Mr Cooney, were engineered specifically for the hotel.

"It's just absolutely devastating," added Mr Cooney, who has been battling ill health himself over the past number of months.

"Especially when we have been doing our best to get through this pandemic and do everything right, to have this bombshell land on us is completely senseless."

As first revealed by the Leader this morning, Gardaí sealed off the scene last night and are due to carry out a technical examination of the scene today. Anyone with any information is asked to contact Longford Garda Station at (043) 3350570.