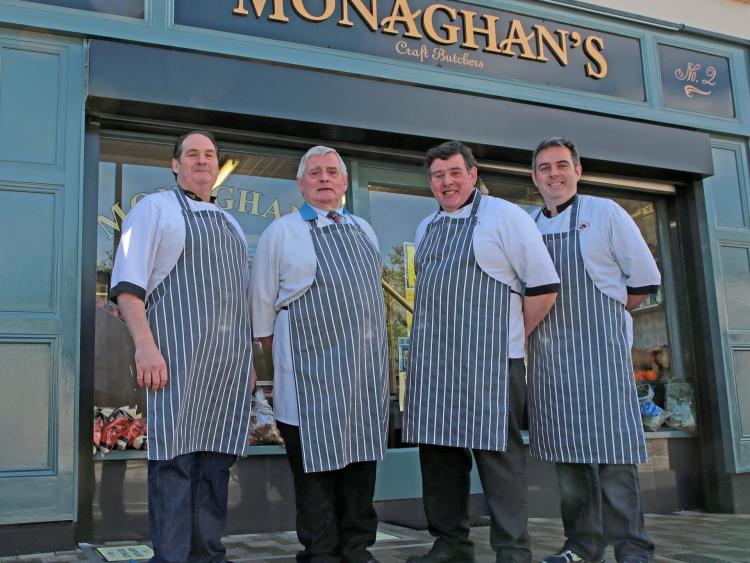 When it comes to delivering outstanding produce to its loyal and ever expanding customer base, Longford town's Monaghan's Butchers is quite simply in a league on it's own.

It's a proud reputation this award winning family run enterprise has built over 40 years as it marks its ruby anniversary this week.

"It's what we pride ourselves on," said it's owner and founder Christy Monaghan.

"The vast bulk of our produce that we offer would not be handled by more than four to five people from farm to fork."

A large slice of that capacity has been due to the high calibre of suppliers the Killashee Street firm has been able to draw from over the past four decades.

"Everything is bought locally and nothing is left to chance to ensure everything that we offer is nothing short of 100 per cent," added Christy's son Martin.

Alongside the latter, also a county councillor in his own right, illustrates the family run feel to this forward thinking and discernible enterprise.

Fellow siblings Chris and Oliver, together with the trio's beloved mother Esther, who Christy described as a key "driving force" in the business's success, have been discernible mainstays throughout its four decade tenure.

Chris, now with leading Irish chain Avoca, played a pivotal part in establishing the Monaghan name during its earlier days through various educational talks to local schools, involving familiar and celebrity chefs such as Neven Maguire.

Having first started out offering beef, lamb and bacon, the influx of a greater Eastern European consumer demand saw the firm spread its retail wings to encompass more pork based cuts of meat.
At the time of its opening back in June 1980, Longford town boasted no fewer than 10 butcher shops, a sizeable array given both the size of the town and the fact emigration and recessionary talk was very much the order of the day.

"I was the youngest man on this street back then and now I'm the oldest," joked Christy as he reflected on the business' 40 year journey.

Joking aside, the decision to set up business in such testing fiscal waters came about more by design than chance.

"I've been involved (in the butchers industry) since I was 11 or 12," added Christy, while rhyming out the likes of Lyons' of Leixlip, Dublin's Grand Canal Street and Hanley's of Rooskey as locations where his experience and zest for the industry grew.

"Back then, this street was a two way street and there have been a lot of changes to the town in that time," added Christy.

Being at the helm of affairs meant family holidays took somewhat of a back seat as the desire to ensure excellence and an unrivalled level of customer service took hold.

"Every customer who walks through our door is attended to by an experienced family member," remarked Christy.

The addition of a purpose built prep facility towards the shop's rear ten years ago was necessitated as consumer demand for the Monaghan brand grew.

Awards have not been in short supply over the years either with its tasty and delectable range of sausages winning several accolades at national level.

"There's not too many family run butchers left in Longford and we have gone through hard times, recessions and the like.

"But we have managed to withstand all of that through the loyalty of our many customers, deceased and ones that have stuck by us," he added.

In more recent times and most specifically with the onset of Covid-19, the need to diversify reemerged once more.

That requirement saw it open a delivery service to customers across the Longford area, something which helped increase business levels over the past four months.

But if one facet of Monaghan's Butchers repute and longevity can be levelled at one specific aspect over the years, Christy said he was in no doubt as to what that was.

'Quality," he simply put it. "It means everything to us."

Based on those utterances, is it any wonder why this respectable and distinguished butchers has and continues to stand the test of time?