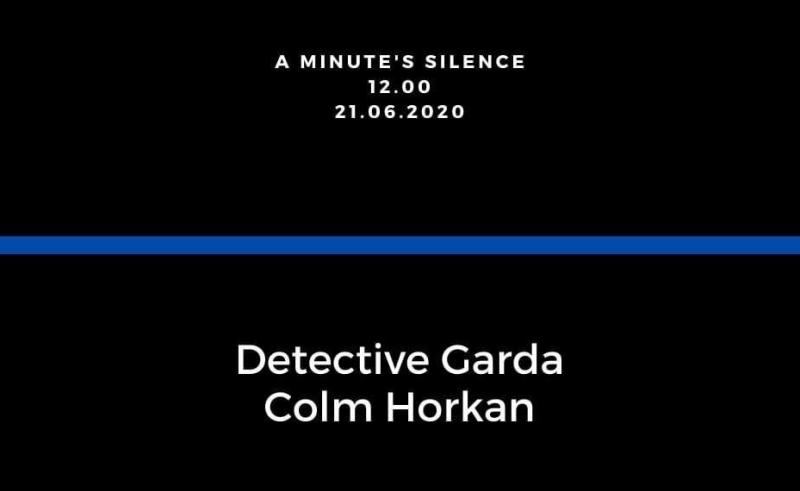 Longford, Granard, Ballymahon and Lanesboro Garda Stations will lead a minute's silence tomorrow at noon in memory of the late Detective Garda Colm Horkan, who was tragically killed in the line of duty on Wednesday night.

The minute's silence will coincide with the late detective's funeral mass, which takes place tomorrow at noon in Charlestown.

Local residents are welcome to join the minute's silence, which will be observed outside the respective stations, but are asked to respect social distancing measures.

"We have a book of condolences and, weather permitting, we'll bring it outside for that minute or for afterwards if people want to sign it. And we're going to clear the front area there and top and tail it with two patrol cars with flashing lights on for that minute," said Superintendent Jim Delaney of the Longford station plans.

Supt Delaney himself will be attending the funeral in Charlestown tomorrow afternoon, as will Longford Inspectors Frank Finn and Adrian Flynn, but members of Longford Garda Station will be there to lead the minute's silence.

Dave Conroy of the Garda Representative Association (GRA) has extended the invitation to garda members and former garda members who cannot travel to the funeral to join the minute's silence at Longford Garda Station tomorrow.

"The tri-colour will be at half-mast outside the station to honour the courage shown by Detective Garda Colm Horkan. Gardaí will be there who cannot travel to the funeral, but retired garda members and blue-light colleagues (ambulance, fire brigade, etc) and members of the public are welcome to join us," he said.

Members of the public are very welcome to join in and pay their respects and the church has been asked to ring the bell in tribute to the late detective.

In Granard, members of the public are also invited to attend the minute's silence for Detective Gda Horkan.

"I'm going to the funeral, and most of the guards will be going to Charlestown tomorrow. A lot of guards will be coming from stations outside the division to man the stations."

Those who are not nearby or passing but would like to observe the minute's silence, are welcome to do so from their homes at 12 noon and to show their solidarity by posting their images on social media using the hashtag #ColmRIP.