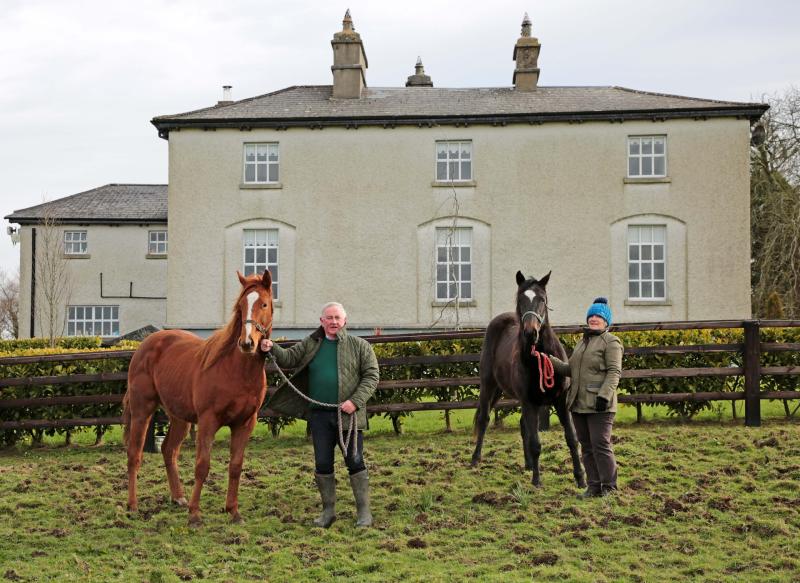 Jerry and Linda Regan with two young future winners; one is the daughter of the Darby winner, Soldier of Fortune and the other is the son of Golden Lariet PICTURE: SHELLEY CORCORAN

But it was also a huge success for Longford and, more specifically, the village of Taghshinny, where The Conditional spent three years of his life with Jerry and Linda Regan.

“We bought him as a foal and reared him here in Taghshinny for three years. He’s now trained by David Bridgewater,” Jerry Regan told the Longford Leader last week.

Jerry and his wife, Linda, own a B&B and stud farm in the south Longford village, called Glebe House (Taghshinny) Stud, where a number of beautiful thoroughbreds reside.

“We bring them to a certain stage and then bring them elsewhere. They’re all thoroughbreds,” said Jerry.

This was a first Festival win for David Bridgewater as a trainer, though he enjoyed five as a jockey, and The Conditional, he said, has potential for the Grand National in the future and is the best horse he has had since The Giant Bolster, who was placed in three Gold Cups.

Who knows what the future holds for The Conditional? Wherever he ends up, he’ll always have his local connection.

“This is a big boost for us,” said Jerry Regan.