Longford Leader columnist Mattie Fox: At this time we must ensure that humanity trumps the economy 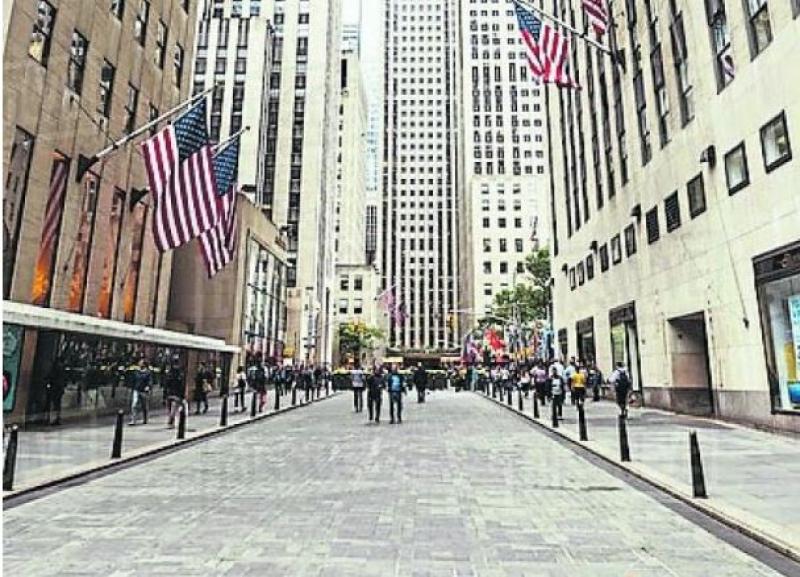 I travelled to NYC last week.

For two days. Stayed somewhere removed from the madding crowd, and felt safe. Still, I’ll be very careful for the next fortnight.

Before departure in Dublin I bumped into a friend from Longford, and exchanged a welcome few words with him and his family.

In the short time I was there, a noticeable change occurred in the behavior pattern of New Yorkers as the coronavirus became a bit more topical, a little bit more in the consciousness, as slowly one could spot evidence of occasional prevention attempts, as yet only very few.

New York residents are always far too busy with the new found mantra of living to work, and maybe forgetting about their own lives. I arrived there on Thursday.

The crowds within and outside JFK were milling around, all rushing, all seeking taxis and transport......typical NY behaviour.

The attendants patrolling traffic movement were their usual efficient selves, measured in their approach; every one aware that the day couldn’t be lived in a hurry, not if you wanted to survive.

Travelling into town was fairly civil, traffic wise, because of the well planned traffic system there. Nobody should need to spend too much time in traffic logjams; especially not at that time of day.

Got into Manhattan in about 40 minutes. By the time I was checked in and had unpacked the small luggage it was around 4, local time.

Later that day I met a few contacts in the music world, agents and managers just to say hello and catch up.

Throughout the live music business there were traces of panic slowly beginning to set in.

But as yet, there was nothing outwardly apparent to suggest that anyone in NY was much preoccupied by the Coronavirus.

Yet, on Thursday, concerts were being considered and discussed - mostly by agents who didn’t want to suffer loss - but, as always was the case, agents don’t go on the road!

That sharpens the awareness of real life, as it was obvious that concerts must be considered and rationally discussed.

The artists were moving towards reacting unilaterally themselves.

By Friday the impact of the virus was becoming topical.

An Taoiseach had met with the US President, who comically, as usual, said many words that didn’t mean much.

However Leo Varadkar was impressive, calm, and articulate. What he said became widely reported, and because he used the occasion to speak to the Irish people, explaining the increased measures that were happening, suddenly, Americans adopted a new awareness.

Immediately, it seemed that they’d heard from someone who was rational, spoke clearly, without embellishments, and that this was a new awakening for them.

In times like these, where the Taoiseach belongs and is at home in his comfort zone, his speeches have a strong, penetrating impact.

The American President became somewhat sidelined as US politicians who were already speaking openly, became bolder and in any case, what happens state to state is more to do with the governors than any president. Even one so vocal as Trump!
People I’d talked to on Thursday afternoon, had changed their minds entirely on Friday, and were in positive action mode.
Most closed their businesses by lunchtime that day.

Witnessing this, first hand, made the impact of An Taoiseach’s words stand in sharp relief to what the American President had said all along. Nobody who is Irish wants to disrespect the office of President, but clearly everyone I spoke to described Mr Trump as a waffler, saying nothing of information or meaning, and worse still repeating it regularly.
By Friday evening it felt that it was time to get out of town.

I had booked a seat on Aer Lingus for the flight on Saturday. On Saturday morning, I went to a well known, renowned hotel, for breakfast, and there were literally no guests. None to be seen.

I sat in the dining room with two other people all far apart, same at lunchtime later that day. Unlike anywhere imaginable.
New York was acting like a well trained army, and virtually nowhere that involved crowds was open, and those that were, had strict protocols to allow in a limited number at a time, each staying well away from the other.
New York had become a different place, overnight.

On Saturday evening I was driven to the airport, had no interaction with anyone except briefly at the check in and in the area where I was located on the plane, sitting in a solitary seat on one side the nearest person to me was on the other side of the plane!

In that area there were almost twenty empty seats with the few occupants that were there, all either on one side or in the middle.

I slept all the way back, arriving in Dublin in the small hours, where the place was literally like a ghost town.
One concluded that America is not looking like somewhere that allows a virus to take hold seriously.
It seemed the economy is way down the scale of thought.

In New York the decision had been made, and was being observed to the letter. It doesn’t look too bad for US.

Not if NY is anything to judge by.

Of course it will wipe billions off the markets, or rather the economy. But most who will suffer are the wealthy.

In America, humanity trumps the economy.