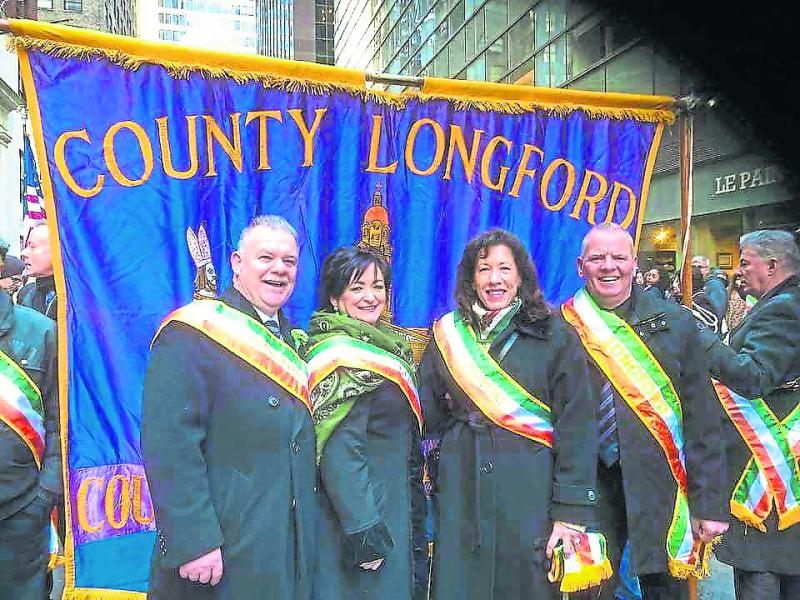 The President of the Longford Association in New York is Patrick Yorke, originally from Toome, just outside Ballymahon, and he is looking forward to the St Patrick’s weekend celebrations and welcoming the delegation from St Christopher’s Services.

He remarked, “We are delighted this year to welcome some of the service users from St Christopher’s to New York. I'm sure it will be a huge thrill for them, and indeed for us to witness, as they take part in the St Patrick’s Day parade up 5th Avenue.

“We will be supporting their fundraising efforts once again and look forward to hearing Brave Giant perform at the Chelsea Bell (Saturday, March 14). There will be a special St Christopher’s showcase of drama and art at the famous Rosie O’Grady's (Friday, March 13) and we are also delighted St Christopher's CEO Derek Scanlon and his wife Fiona will be in attendance at our dance.”

When the legendary Mike Prunty stepped down as President of the Longford Association in 2016, Patrick took over the reins.

He reflected, “While our meeting and dance attendance is smaller now our charitable work is greater than ever.”

The association, through their annual golf tournament and dinner dance journal proceeds, continue to support causes that ‘unexpectedly arise’ each year.

Patrick explained, “In 2020, the proceeds of the golf tournament were donated to a young man whose mom, originally from Ballymahon, passed away seven weeks after being first diagnosed with cancer. Her son Jake, one of five that she and her husband had adopted, is a special- needs adult and the money raised was put towards him obtaining an assisted living apartment.

“In February 2020, we helped organise a hugely successful auction night with the generous proceeds donated to the Kevin Bell Repatriation Trust. This was definitely one of my proudest moments as a Longford man and listening to Colin Bell speak, we felt like superstars.”

He paid tribute to ‘great supporters’ of the association. “It would be remiss of me if I did not mention my brothers, Dermot and his wife Siobhan, Alan and his wife Megan. They have always been great supporters of everything we do. Dermot is solely responsible for raising hundreds of thousands of dollars for various charities throughout the years.

“We are blessed to have people like Aidan McGoldrick, Joe Prunty, Mike Prunty, Des McGoldrick, Sean Sorohan, Cormac McCormack and others that help with these events each year. Without them none of this charitable work would be possible. Some of our greatest supporters have no connection other than friendship to Longford. Donegal native Sean Spratt and Sligo man Gerry McGwyne are two of the finest gentlemen we count on every time we fundraise.”

Patrick was raised on a mixed use farm, the middle child of seven born to Mick and Kate Yorke. “When I think back, work was plentiful and hard. Money was scarce but there was always plenty of food. I suppose, like most rural families of that time, the majority of food consumed was home grown. While my father worked the land, my mother raised pigs, chickens and turkeys to sell in Edgeworthstown mart for Christmas. This was done while raising seven children, an unbelievable amount of work.”

After completing his Leaving Cert at Ballymahon Vocational School, Patrick applied to Bord na Móna and he started training as a fitter in the summer of 1979. In June of 1984 when the entire class was let go he spent the summer working at home.

Following that summer, he and Eugene Bratten, without much planning or preparation, decided to head for the Big Apple. On September 22, 1984, Joe Bratten and Mick Yorke dropped their suit clad sons at Shannon airport.

Patrick recalled, “When we arrived in New York we were met by Warren and Kitty (Lennon) Wright and Pat Lennon or ‘Uncle’ as he was fondly referred to. We stayed with Pat and his wife Mauney, nee Bratten, one of the sweetest and most generous ladies the good Lord ever put on this earth. The Lennons had two daughters Mary and Patricia.”

He continued, “In the fall of ‘84 I moved to Queens, NY to share an apartment with two of the best characters Killoe and Longford ever exported, Frank Rowley and Des McGoldrick. We worked in apartment buildings at the time and enjoyed an odd visit to McLoughlin's bar or the Glen Oaks in Astoria. Both of these establishments were home to a large and energetic contingent of Longfordians. The stories that originated in that apartment were priceless and to this day, when we get together, some will come up.”

In March of 1989, Patrick started work as resident manager at 136 E79th Street and he added, “Thanks to a fellow Ballymahon man Pat Macken ‘for the start’.

He remembers that on a roasting July 4 weekend in 1989, the aforementioned Patricia Lennon became his wife, Patricia Yorke.

The birth of their first daughter was also memorable! Patrick takes up the story: “On July 3, 1994, Katie Yorke announced her pending arrival into this world interrupting a golf game between myself and Des McGoldrick. On July 4, just as Ireland were battling Holland in Orlando at the World Cup, she actually did grace us with her presence. On September 26, 1998 we were blessed with the arrival of another beautiful daughter, Kelly Ann.”

Shortly after his arrival in NY in 1984, Patrick joined the Longford Association. He pointed out, “The annual general meetings back then were kind of like the Democratic primary we are witnessing right now, the exception being that most of the debating was done on the quiet. The hall at St Ignatius School would be full with people showing up to vote. What a pleasure this problem would be today!”

Patrick said there were some incredible Longford people involved back then and meetings could go on for hours.

“With Pat Burns from Ballymahon, The Gurdy Quinn, Jimmy Quinn, Noel Lennon, Stevie Reilly, the legendary Paddy Armstrong, Lena Kelly, Louise McKeon, Pat Lennon, Tommy Hoey and the unstoppable Mike Prunty to name a few, discussions were spirited but everyone had the best interest of the Association at heart.”

The St Patrick's Day celebrations are always the highlight of the year for the Longford Association in New York.

Patrick outlined, “It is a proud feeling to march up 5th Avenue behind the St Mel’s Longford banner. The annual dance is also a large gathering of folks from both sides of the ocean.

“Some of Longford's greatest were honoured and recognised for their accomplishments and support of Longford; people like John Mahon, Ray Flynn, Mike Prunty, Tony Bracken, Pat Burke, Rose Cosgrave, Albert Reynolds, the brothers McCormack, Kelleher, Rowley and Lennon to name a few. It is always a great time to meet up with old acquaintances, make new friends and celebrate Longford.”

Patrick said while it is always nice to return home to see his sisters Marie (Wexford), Claire in Abbeyshrule, Paula in Drogheda and brother Tom in Toome, that after the passing of his parents Mick and Kate in the summer of 2014 ‘home is never the same’.

He concluded by wishing everyone a joyous St Patrick's Day. “Whether you are in Longford, London or Long Island, be proud to be Irish and be proud to celebrate your Longford connections.”