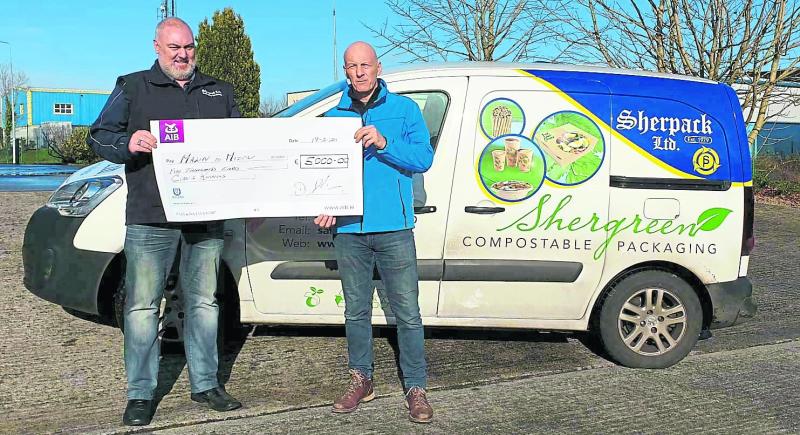 Sponsor Derek Sheridan of Sherpack Ltd presenting a €5,000 donation to Brendan Considine for the Malin to Mizen Cycle

Cian Neary from Killashee was 15 years old when he passed away in September following a battle with cancer.

Since then, his parents, Enda and Evelyn have been working hard to set up a charity in his name. Cian’s Kennels aims to bring joy to the lives of sick children by bringing their beloved pets closer to them as they receive treatment in hospital.

Local man Brendan Considine and his family have had their own brush with heartbreak, following the loss of siblings Donal and Dearbhla - both within the last 14 months. And when it came to organising a fundraiser in their memory, Brendan selected Cian’s Kennels as the recipient of the proceeds.

There will be a number of fundraisers over the coming weeks, the proceeds of which will all go towards the worthy cause.
The Tally Ho Golf Society is hosting a table quiz at Longford Rugby Club this Friday, February 28, at 9pm sharp, with all funds going directly to Cian’s Kennels.

“I was chatting to an old school mate of mine and out of that came an over 50s football soccer tournament that’s going to be held on Good Friday at the rugby club at 3pm,” Brendan told the Longford Leader.

“That’s a bunch of old fogies, over 50s, and what we’re trying to do is get that 1975 slashers school boy that we all started on back together, plus anybody else that’s over 50 and wants to get involved.

“Anybody who wants to get involved in that - either as an individual or with a team - can contact me directly.”

Donal and Dearbhla Considine both worked for the Department of Social Protection and, with so many former colleagues eager to get involved in the fundraising, the department will host a 5k Walk/Run at the Albert Reynolds Peace Park (The Mall) on May 9 at 12pm.

The main event, though, is a Malin to Mizen Head Cycle, which kicks off on May 2 and will run until May 9. Derek Sheridan of Sherpack Ltd has come on board as the main sponsor and is providing bicycles as well as a cash donation of €5,000 for which Brendan is extremely grateful.

More information about the Malin to Mizen Cycle can be found via a GoFundMe page, which has been set up in memory of Donal and Dearbhla Considine and Cian Neary. Simply search Donal and Dearbhle for Cian’s Kennels to read about the worthy cause or to make a donation.