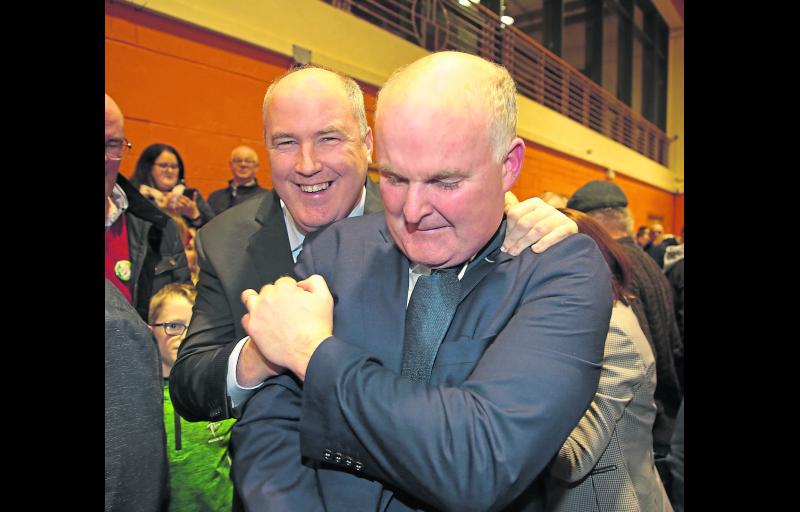 An emotional Joe Flaherty with his brother Eamonn after over 2,800 of Micheál Carrigy's transfers help him to nab the second Dáil seat PICTURE: SHELLEY CORCORAN

Labour’s hopes of retaining the seat vacated by the its retiring stalwart Willie Penrose came up short last weekend as Alan ‘Budda’ Mangan bowed out of the race on the eighth count.

In truth, the former Westmeath footballer was always facing an uphill task to retain Labour’s national representative presence in Longford-Westmeath following the well documented ‘Siege of Kenagh’ in 2016.

Though his 1,904 first preference return was respectable, it left the Castletown Geoghegan man a massive 8,000 first preferences shy of Fianna Fáil's Robert Troy who claimed the constituency’s fourth and final seat.

Transfers were always likely to play a key part in the events of last weekend and it certainly came into play when it quickly emerged Sinn Féin’s Sorca Clarke was going to top the poll.

As is routinely the case with Sinn Féin candidates, the former Westmeath county councillor’s 571 surplus of votes went everywhere.

Perhaps ironically, it was the man she replaced in the Dáil, Kevin ‘Boxer’ Moran who benefited most, securing 97 transfers.

It was ultimately transfers which would seal Boxer’s fate too when Longford Fine Gael candidate Cllr Micheál Carrigy was sent packing after the ninth count.

Despite enjoying a healthy 993 lead over Fianna Fáil’s Joe Flaherty going into the Ballinalee postmaster’s redistribition of votes, the former astonishingly contrived to take over 2,800 transfers as Longford’s electorate did what they didn’t do four years previously by returning a TD to the corridors of Leinster House.