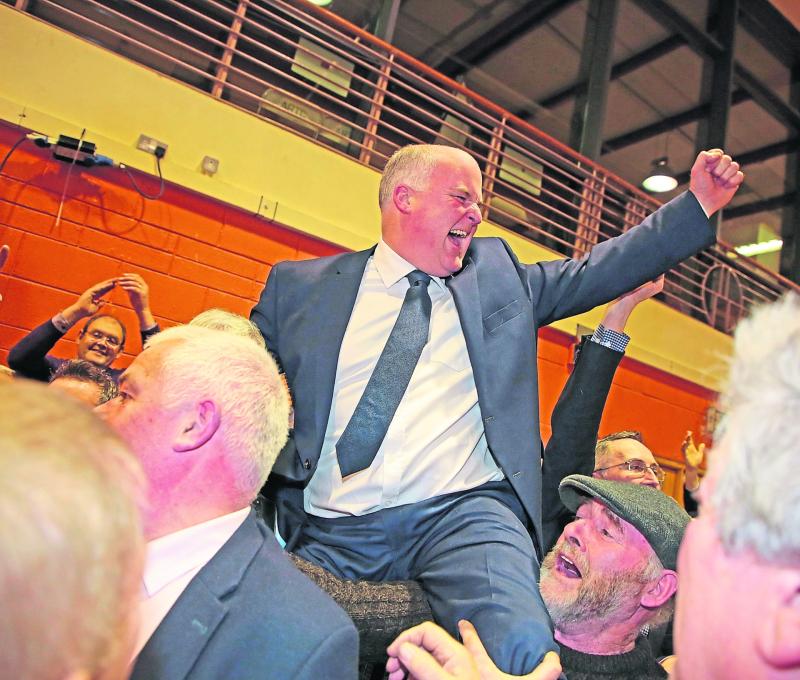 A jubilant Joe Flaherty is lifted onto the shoulders of his supporters as his election is announced PICTURE: SHELLEY CORCORAN

It might have not have conjured up the same drama as the Siege of Kenagh four years previously, but the upshot of its 2020 equivalent delivered what many of its main protagonists had hoped for-the election of a Longford TD.

Fianna Fáil’s Joe Flaherty looks to have ended the county’s four year lacuna from the corridors of Leinster House by claiming the constituency’s second seat and in so doing obtained his party’s pre-election two seat target.

It was an exceptional achievement given it was one of only five constituencies nationwide which returned two Fianna Fáil TDs.
From a local perspective for the party, the outcome could not have been any more momentous.

Fianna Fáil's chasm from the political stage in Longford has been as politically wearing as it has perplexing.

The loss of Peter Kelly's seat in 2011 in the backdrop of a weakening economic fabric, exacerbated by the closure of Connolly Barracks were key catalysts behind the party's departure from the political stage.

Four years later and despite in-fighting and division over its decision to promulgate Connie Gerety Quinn as its 2016 candidate, the Carrickedmond native still managed to rake in 4,000 first preferences.

It was a feat which illustrated the hardcore Fianna Fáil support which still remained in Longford and one which opened up the prospect of it returning to its two seat standing across the constituency.

Party chiefs knew that, grassroots supporters knew that and more explicitly the man now with the initials TD beside his name knew that.

The one disappointing aspect was, despite a five per cent increase in its vote across Longford, the party experienced a near three per cent fall off in support across the constituency.

In a striking hallmark of last year’s local elections, Fianna Fáil’s falling support in north Longford reared its head once more, bringing with it a bruising 18 per cent reduction.

Kinnegad and Mullingar (10.5 and 6.9) were the other key areas which saw a marked decline in Fianna Fáil support.

It was a trend party flagbearer Robert Troy attested to following his own successful return to the Dáil over the weekend.

“There was a difficulty on our part to demonstrate that we would be an alternative and that they would be getting a change with Fianna Fáil despite acting in the national interest for the last four years in providing certainty and stability for the country in the Brexit negotiations,” he said.

“That wasn't rewarded because there was a perception there that we were far too closely associated with Fine Gael.

"Of course we are disappointed. We wanted to increase our seats in Dáil Éireann. Our message didn't resonate in certain constituencies and that's plain to be seen."

Much of that difficulty to strike a chord with the voting public came on the back of an unrelenting rise in Sinn Féin support nationwide.

In what was the undoubted surprise of general election 2020, Sorca Clarke capitalised on what was an historic election for her party as she topped the poll with over 11,800 first preferences on the first count.

And, just as the Fianna Fáil machine hit the skids in Mullingar, it was the mother of four’s home base which more than came up trumps as she secured a 14 per cent upswing while a further 15 per cent upturn was also procured a few miles down the road in Kinnegad.

Such was the unrelenting surge in Sinn Féin support, the party saw its approval rating increase across all seven of the constituency’s municipal district areas.

“The people have spoken,” was the simple, yet striking byword used by the Mullingar accountant as she reflected on her remarkable path to prominence, some nine months after she saw her own county council seat go up in political smoke at the 2019 local elections.

For the main government party, it has been an election to forget. Outgoing TD Peter Burke faces a real fight to cling onto his seat, having seen his support suffer in the wake of an unremitting rise in Sinn Féin support.

Despite enjoying a relatively high profile through his role on the Dáil’s Public Accounts Committee (PAC), the chartered accountant paid the price from drops in his party’s overall approval rating in his own base of Mullingar, Kinnegad, Moate and Athlone.

Not that the father of two appeared too despondent when giving his reaction in Athlone IT’s count centre on Sunday evening as he heaped praise on all those who came out and rowed in behind his quest for a second Dáil term.

Nothing, however, could hide the furrowed brows which were clearly evident on the faces of Mr Burke’s party supporters as their hopes in bringing running mate Cllr Micheal Carrigy across the line looked to have all but evaporated on Sunday.

The sitting County Council Cathaoirleach had staked his claim for a Dáil seat on a pre election blueprint of a “proven track record” and over a decade of experience in local politics.

And despite an impressive 6,334 first preference vote return, the Ballinalee postmaster paid the price for the Sinn Féin upsurge, a factor which was perhaps demonstrated in how it managed to outpoll Cllr Carrigy in Legan, arguably one of Fine Gael’s strongest political heartlands.

Cllr Carrigy, himself, was irked at how a sizeable chunk of Longford voters had, like the general election of 2016, once again opted to send their number ones outside of the county.

“3,500 votes left the county for a Sinn Féin candidate, which is quite astonishing considering the candidate actually lost a seat in the local elections in Westmeath and would not have been well-known at all in Longford,” he said.

The Co Longford tourism committee chairperson conceded the sudden turnaround in fortunes for Sinn Féin had a lot to do with a rising level in voter apathy, particularly among the younger members of Longford/Westmeath’s near 95,000 electorate.

It was a similar tale of woe for outgoing OPW Minister Kevin ‘Boxer’ Moran.

Widely touted as being one of the so-called ‘dead certs’ to retain a seat, the Athlone based politician cut a sombre figure on Sunday evening when all but accepting defeat once tallying had come to a close.

His apparent demise summed up an election full of surprises and unexpected political high drama.

As short as 1/10 in some bookmakers in lead up to the weekend election, Mr Moran dumbed down claims his defection from the Independent Alliance had played any part in his fall from grace.

Rather, Mr Moran told of how he felt “let down” in some quarters, especially at how his own political stomping ground of Athlone had failed to safeguard his Dáil career.

“What I am a small bit hurt by is the fact I have an office in Athlone and they (voters) voted en bloc for Sinn Féin," he said.

More pointedly, he lambasted what he described as a “deliberate” and pointed social media campaign which had been waged against his own family in the lead up to polling day.

In not ruling out the prospect of pursuing the matter through legal means, Mr Moran said he believed in time people will come to realise the "very good minister" they had given up.

In a final pot shot at those enjoying the fruits of his departure from the political stage, the self employed businessman hinted at potentially stormy times ahead should Sinn Féin take up the democratic baton and go into government.

“In six or 12 months times they will appreciate the work I did do,” he said.

“What we’re seeing now is a lot of promises, I’ve been in government, I’ve seen how tight it is to get money, I know how tight is to work around the table to deliver.”

And it’s precisely that delivery Sinn Féin are now faced with as it and the eyes of the country focus on who and what parties come together in the high stakes game of political formation over the days and weeks ahead.