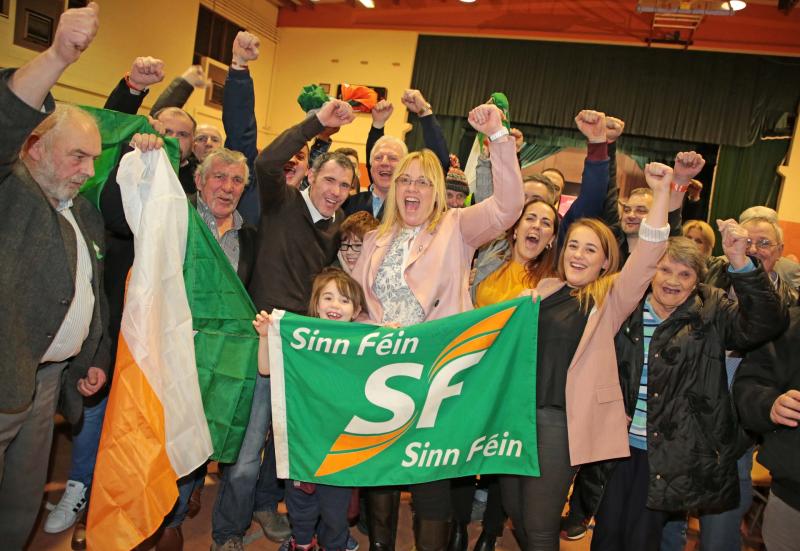 Incredibly, the Mullingar-based poll-topper lost her seat on Westmeath County Council in last year's local election, and she comfortably exceeded the 11,277 quota, securing 11,848 votes, and benefiting from the juggernaut-like 'it's time for change' Sinn Féin wave that has swept the country.

Her surplus of 571 votes will be distributed during Count Two.

One has to go back to the 1957 general election, when Ruairi O’Bradaigh secured 5,506 first preferences in the then Longford Westmeath five seater, for the last time that Sinn Féin was successful in winning a seat in this constituency.

They are both on course to be elected and if that happens, it will the first occasion that the Longford / Westmeath electorate returned two FF TD's since 2007 when Mary O'Rourke and the late Peter Kelly were elected.

Troy topped the poll with 11,653 votes four years ago, and although his first preference vote is slightly down on this occasion, FF's vote management was much better this time, with many of the votes Troy picked up in Longford in 2016 staying in the county and going to Joe Flaherty, their Longford-based candidate, this time around.

Depending on negotiations over the formation of the next Government, the Ballynacargy postmaster could well be in line for a ministerial role.

Should Lanesboro native Cllr Joe Flaherty (who secured 7,666 first preferences, the third highest of the 15 candidates) cross the line and secure election to the 33rd Dáil he will be the first successful Longford general election candidate since Fine Gael's James Bannon, who was re-elected in 2011. The Legan man subsequently lost his seat following the infamous Siege of Kenagh marathon count in 2016.

There was much frustration four years ago when Longford was left as the ONLY county in the country without a sitting TD in it and it would appear that the message to Vote #1 Longford resonated with the electorate.

WATCH | Longford's Joe Flaherty in line for a seat

Lying in fourth is outgoing Fine Gael deputy Peter Burke (6,617 first preferences) and he appears to be in a dogfight to cling onto his seat along with outgoing junior minister Kevin 'Boxer' Moran (Independent).

Considering Burke's running mate, Ballinalee postmaster and first-time candidate, Cllr Micheál Carrigy, also polled strongly (6,334), the belief is that he will be more transfer friendly than the 'Boxer'.

During interviews at the media centre, a crestfallen and sometimes emotional 'Boxer' conceded that he required a miracle to hold onto his seat and he hit out at social media trolls and keyboard warriors that had directed abuse at his family during the campaign.

Longford County Council Cathaoirleach Cllr Micheál Carrigy (Fine Gael) is in sixth place and he expressed disappointment over the number of Longford votes that left the county and went to the Sinn Féin candidate Sorca Clarke. Carrigy, on 6,334 votes, is 396 votes behind 'Boxer' Moran and 283 votes behind Burke, so he can't be dismissed entirely just yet. Indeed, if Carrigy could stay in the race longer than Burke it would increase his chances of success.