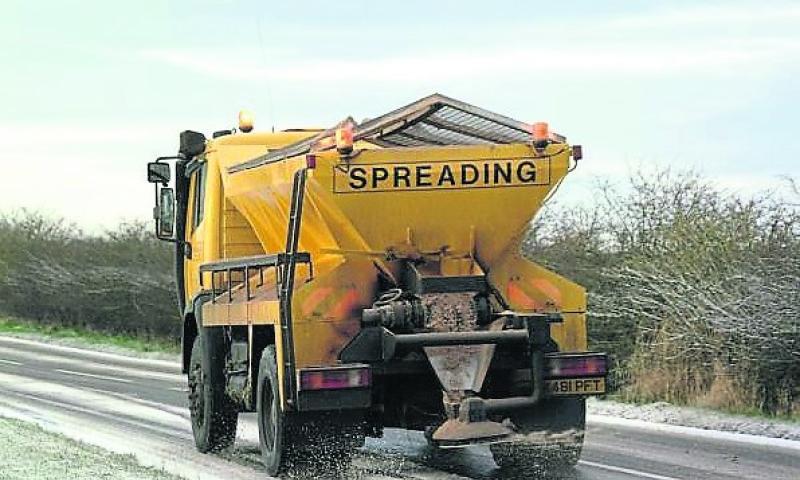 A large number of roads need to be included on the council gritter route in icy weather to avoid accidents, a number of Ballymahon MD councillors have said.

The issue was raised at last week’s meeting of Ballymahon MD by Cllr Colm Murray (FG) who requested the gritter route be adjusted to go to certain roads, leading to national schools which are very slippery in icy weather.

He was backed by his party colleague, Cllr Gerard Farrell, who said the roads are a “big safety issue” for families travelling to schools when there is ice on the roads.

“I have a gritter issue as well,” Cllr Paul Ross (FG) piped up.

“There have been a couple of crashes in Ardagh during the harsh weather. We need to send the gritter out there. The bend at Meeltanagh Road is particularly bad,” he said.

On the subject of slippery roads, Cllr Mick Cahill also made a suggestion for the gritter route.

“The road to Center Parcs (L1121) off the Ballymahon to Mullingar Road (R392) needs to be gritted too. There’s a huge volume of traffic there,” he said.

The gritter route should be reviewed by the SPC, according to Cllr Ross, “because if there is a crash on the roads and people are ringing us about them, we have a responsibility to do something”.

Meanwhile, Cllr Mark Casey (Ind) chipped in with a suggestion of his own: “We should actually salt the roads to every school. The last thing we need is that sort of tragedy,” he said.

Director of Services Barbara Heslin explained that, following the last meeting, the council asked that the salting route be included on the agenda for the next SPC meeting.

“They’re reviewing the routes,” she said but, at a prompt from Cllr Colm Murray, she added that the council “can’t commit” to altering the route just yet.

“But the programme is going to be reviewed. I’ll check with Paul and see what’s possible,” she concluded, referring to Area Engineer Paul Newell.